Malcolm Dawson writes…….I’m starting to get worried. Following on from the shining example of scribemeister Pete Sixsmith, I have embarked on a weight loss campaign and now some 40lbs lighter (just another 40 to go!) I find that the pain in my knees is considerably less and I am walking much better. The fact my arthritis had made the journey to and from the car too painful to contemplate was my excuse for not renewing my season card last April – as outlined in an earlier blog post. I haven’t missed much by the sound of it (certainly not a home win) and at only £3 to get into West Auckland’s Wanted Stadium yesterday my bank balance has been a lot healthier. But Peter is more resilient and he was back at the Stadium of Light to witness a record breaking performance. What did he make of it? Read on…..

If it’s any consolation to poor Robbin Ruiter (and I’m sure it isn’t) that wasn’t quite the worst goalkeeping performance I have ever seen by a Sunderland keeper. That honour goes to Sandy McLaughlan on New Year’s Day 1966 when presumably still under the influence of Irn Bru and deep fried Mars Bars, the Scot conceded 5 at Roker against West Bromwich Albion – and never played for Sunderland again.

Having said that, Ruiter’s performance and that of his Millwall counterpart, Jordan Archer, were an insult to the noble art of goalkeeping. Would Johnny Mapson have allowed one to trickle through his legs? Would Bryan King, the Millwall keeper throughout the 60s and 70s, have dropped the first cross put into him at the feet of the opposition’s top scorer? 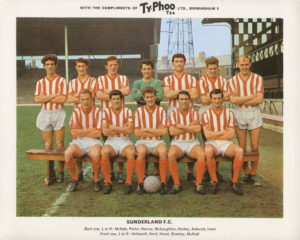 Would Barry Siddall have left his near post as open as the Dutchman did for the second goal – and would his postman’s hands have been able to push it out? And would Billy Casper in Ken Loach’s film “Kes” have made a better attempt at saving Adam Matthews’s admittedly tricky cross? Had PE teacher Mr “I’m Bobby Charlton” Sugden been in charge of The Lions, poor Archer would have been forced through the showers while they were cold and then told to “drip dry” when he emerged.

So a master class in goalkeeping catastrophe as another opportunity to win the first home game since Theresa May looked a viable Prime Minister and Barrack Obama was making apple pie beds all over the White House in preparation for the arrival of Donald Trump, was spurned. Just as it was against Queens Park Rangers, Bolton Wanderers and Nottingham Forest, points which would have put us in a kind of mid table comfort zone instead of propping up the second tier and staring into the abyss that is now known as League One.

Take the two errors out and Ruiter did quite well. He caught every cross that he came for and made one very good save in the second half which stopped Millwall from probably winning their first away game of the season. But keepers stand or fall by the goals they let in and both of those were down to him. Even Rumpole of the Bailey would have a hard job convincing a jury that the Dutchman may well have been hapless but he was not the only one to blame.

Having started brightly and gone ahead, what on earth possessed Johnny Williams to barge into the back of Lee Gregory? Not only did The Lions score from the resultant free kick, but Williams was led off with a shoulder injury and was replaced by George Honeyman.

Then, having just conceded the equaliser, why did John O’Shea foul the same player? Same position, same free kick, same result. A man of his experience should know better – but when your whole career has been spent marking the likes of Aguero, Drogba and Suarez, it can be difficult to come up against a street wise forward who was Jamie Vardy’s replacement at FC Halifax Town.

I shudder to think where we would be without Grabban. He took his goal well and he actually moves into space ready to receive the ball. Unfortunately, he rarely gets it where he wants it. He thrives on running channels and outpacing defenders. We have a tendency to lump the ball up and expect him to chase after it.

Kit Symons was watching from the stands as his pal Chris Coleman was switching on the Christmas lights in Newport. This is what he might have said. “Bloody hell, Chris, we’ve got a job on our hands here. There’s a pair of goalkeepers who have no confidence and who nobody believes in. The full backs are OK going forward but the two central defenders are really creaking. Marc Wilson would make a good stand off for Newport Gwent Dragons, he kicks the ball that far. In midfield, they had Lee Cattermole, harshly booked in the first half and reasonably effective in the second. But he is nowhere near the player he was three years ago and even further away from the player and icon he thinks he is.

Young Williams ran around a lot and then injured himself – not that he needs any help on that score. The lad who came on tries hard but he is neither big enough nor strong enough. McNair has just come back from a bad injury but he was shattered as the game went on and was bullied out of the game by the opposition. McGeady does what he does and is nice to watch but the final ball isn’t good enough and his corners aren’t great. Mind, there’s no height in the team so when it does get into the box, nobody is big enough to win it.

Young Watmore showed a lot of pace and could have had a penalty but then he was injured and went off. McManaman came on, did well to get to the by-line but wasn’t given enough of the ball. He was blowing like a grampus after half an hour and he clearly isn’t match fit. Grabban is good but they don’t play to his strengths – he’s not a player who wastes his energy like Honeyman or Williams, he needs the ball played in front of him.

The crowd were up for the game at the start and almost relaxed when the first goal was scored. But they became edgy and seem quite keen on irony – they cheered when the keeper caught the ball in the second half. This will not be easy, Chris. There is very little confidence or self-belief and not a great number of options. If we want to play three at the back, we will struggle as they only have three centre backs and one of them went off at the end. They were missing Ndong but I think you may have to sell him in order to raise funds for some signings in January.

After Villa on Tuesday, we have five games up to Christmas. Take out Wolves away and the others are games we have to win. Not sure that the sum of the parts will equal a whole one, Chris. What do you mean, I’m on my own? How did you get a job as Santa in a Newport department store? Can you not get me fixed up as an elf?”

Coleman arrives today so let’s hope that the Symonds dossier is a bit thicker and considerably more upbeat than that. He has a difficult job trying to save us from League One, embarrassment and possible oblivion.

The last Welshman to manage us was Alan Durban. He once said “If you want entertainment go to the circus.”

Chris Coleman might see this one as more Monty Python than Billy Smart.