I have been trawling through what passes for my memory for the first time that I saw Millwall play. At Roker, it would have been in 1971, the final game of a disappointing season, our first at the second level since 1963. We finished in the heady heights of 13th place with no promotion challenge and no relegation crisis, no cup runs and precious little excitement. Alan Brown had coughed up our first six figure fee for Dave Watson in December and he had done well, scoring at Vicarage Road on his debut and then having a towering game in the Wear-Tees alleged derby, where we came back from 1-2 down to level.

Watson looked a very good player and improved on that assessment when Brown’s (temporary) successor, Billy Elliott, moved him to centre half. As Watson came in, Joe Baker returned to his first club, Hibernian, where he scored twelve goals in twenty games, the same number he scored at Sunderland but in half the appearances.

By the time Millwall arrived, the season had drifted to an end. The paltry crowd of 11,960 had little to enthuse about as the red and whites saw the season out in desultory style, leaving many of us looking forward to a summer of cricket which featured tours by Pakistan and India – but not at the same time. 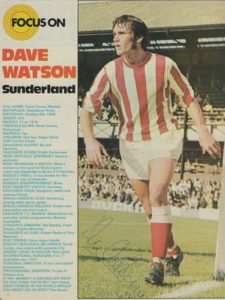 The Lions team was;

There were some interesting players in that Millwall side. Bryan King was an excellent keeper who played over 300 games for Millwall and 30 in the First Division for Coventry. He also made the bench for England in 1974 when we were playing pointless friendly matches, seeing as we had failed to qualify for the World Cup Finals in the Federal Republic of Germany. He now lives in Scandinavia, which is quite fitting seeing as he spent most of his career at Cold Blow Lane.

Barry Kitchener was a big, muscular, physical central defender who replaced Shildon’s own Brian Snowdon (of which more later) in the Lions team. He made a total of 523 appearances before having a spell as a Tampa Bay Rowdie in the early 80s. Tall with flowing locks, he was a giant of a player and is fondly remembered by the South London club’s supporters both as a player and as a man. My abiding memory of him is the day at The Den when he kicked lumps out of Wayne Entwistle only for the punk rocker to bamboozle him and put the winner in near the end. One of the stands at The New Den is named after him; so much better than the dreary North, South, East and West stands that we have.

The winning goal came midway through the first half from Harry Cripps. Like Kitchener he was a Millwall legend in the days when players stayed at their local or first clubs for ever. We had Monty, Cec, Martin Harvey in our line up, they had King, Cripps and Kitchener in theirs. It doesn’t seem to happen anymore and I am not sure that that’s a good thing. I have to say that I know very few of the players who line up for our Championship opponents. It could be a darn site worse next season if the worst comes to the worst.

‘Arry Boy’s goal was a good one as he ran onto a pass and chipped it past Monty. The game was instantly forgettable and I trooped back to the college dining hall for my tea and a night on the Starbrite.

I first saw The Lions at Darlington in October 1967, 50 years ago in a fourth round League Cup tie. The Quakers were on a bit of a roll that year, having dispatched Portsmouth in the last round and Millwall, newly promoted to the Second Division, were seen as a biggish fish. Brian Snowdon, nephew of Norman Corner the owner of our local corner shop and deadly enemy of Madge who had the shop opposite, would often take me to watch his nephew when he appeared in the region. I saw him at Sunderland a couple of times (my first time in the main stand at Roker – Harry Hooper scored twice) when he played at Portsmouth, but he had left The Den when this game took place and was playing for Margate in the Southern League. So no complimentary ticket….

I would have gone through on the No 1 United bus, usually a double decker with electric doors at the front rather than an open platform at the back and it would have lumbered through to Darlo, crossing the newly opened motorway at Burtree and picking up men bedecked in black and white scarves and flat caps at Faverdale and Cockerton before gliding into the bus station. From there, it was a two minute walk across Victoria Road to Feethams and the queue outside the mock-up of Wembley’s twin towers. This was the cricket field entrance and was followed by a run around the perimeter of the cricket pitch to take up a place on the terrace between the main stand and the prosaically named Tin Shed. Darlington won 2-0 and Shildon born centre forward Brian Conlon starred. In fact, to paraphrase Victor Kiam, he was so good that Millwall bought him the same week.

This season they come to us in a higher position (not difficult) and with a genuine manager in charge in Neil Harris. He is a current day Cripps/Kitchener, having made 380 appearances for them in two spells and scoring 125 goals. He replaced Ian Holloway as manager two years ago, so by the standards of the trigger happy Championship, he is a veritable Ferguson/Wenger.

He has accumulated a decent team as well, good enough to get them into this league at the end of last season. There’s the obligatory ex Mag in Shane Ferguson, George Saville who looked a decent player at Wolves and Lee Gregory, who played second striker to Jamie Vardy at FC Halifax Town a few years ago and who has an excellent scoring record at whatever level he has played at.

By the time the game starts, there may be a new manager in situ – but I wouldn’t put the house on it. Recent names are hardly inspiring – Harry Redknapp for goodness sake! Are things that bad – and we may go for a while with Robbie Stockdale but not Billy McKinlay who has sloped off to West Ham to aid and abet The Great Scottish Fraud in his new job.

Hopefully the Lions will act more like pussy cats and gently roll over and allow us to claim our first home win for nearly a year. Or maybe not……..

1 thought on “The first time ever I saw your team: Millwall”

Next Post
If Millwall’s visit isn’t worrying enough, Steve Bruce’s Aston Villa are up next