Malcolm Dawson writes……the last time I went to Wolves, if I remember rightly, Stephen Elliot equalised with about 10 minutes to go and it was the last time I was seriously worried for my personal safety at a football match.

I had arranged to go with a female friend of mine who had been born in the Black Country and claimed to be a Wolves fan, even though she was more into rugby and mixing with the hooray Henry types that sport attracted in rural Leicestershire. I should have known things were going to turn out awry, when I arrived to pick her up at mid-day to find a note (or by then it might have been a text) saying she had nipped out to the shops. The shops being Tesco and her weekly big shop, which of course all had to be unpacked first, then she insisted on a cup of coffee and a sandwich, all the time my fidgity unease becoming a virtual panic. Eventually we set off at around two but by the time we got near the ground, the designated away parking had all gone and I ended up having to leave the car some way away, near the centre of town. We made it just in time for kick off. Wolves led for most of the game then with minutes to go we scored.

As I left the ground in my red and white shirt I was spat at and called a Geordie b*****d! Of course the stock reply is “call me a b*****d but don’t call me a Geordie!” but it was then a more amenable home supporter advised me to remove my Sunderland top before venturing into the underpass that led to the car park. That was the last time I accompanied that particular lady to a game.

Now, in the latest part of his series in which he recalls his own first encounters with the grounds SAFC visit this season, Pete Sixsmith  remembers Molineux from a year when The Ballad of Bonnie and Clyde, The Mighty Quinn and Cinderella Rockerfeller were all topping the charts and the nation held its collective breath to see if Congratulations would see Cliff come back to the UK with the Eurovision trophy …

Read Pete’s companion series about his first view of the current seasons’ visitors to the Stadium of Light here.

It was Saturday, March 9 1968. I was in my first year of Sixth Form at Bishop Auckland Grammar School, desperately trying to pick up a few more O Levels to aid my further education applications and delivering newspapers on a Sunday morning for the princely sum of £1/10 a week (that’s £1.50 in post decimal terms!)

It was also my second season of being a regular away supporter. I travelled on the Supporters’ Association No 1 bus, organised and supervised by John Tennick, the legendary fishing bait salesman of Dundas Street in Monkwearmouth. Most Sunderland supporters of my age would have called into his shop to pay their fares in advance, surrounded by lug worm and other varieties of live bait for the discerning sea fisherman.

I had seen a fair number of games that year, missing out on very few and those usually being long distance. I made it to The Dell, where we were two up and managed to lose 3-2, to Craven Cottage where we lost by a similar score and to the City Ground, where we were three up at half time and managed not to throw that one away. And best of all, I was at Old Trafford, when goals from Colin Suggett and George Mulhall prevented United from claiming the league title and helping City to win it.

It was a poor season though. We slipped out of the League Cup to Leeds United, lost to Norwich City in the FA Cup and, after a bright start (3rd after a 2-0 win at Filbert Street in early September) we slid down the league and by March, we were 21st out of 22, with only Fulham below us. We had sacked the manager in January after the Norwich defeat, Ian McColl beating a retreat back to Scotland and the tranquility of running a garage rather than trying to squeeze something out of the likes of Jim Baxter and George Kinnell.

He had been replaced by Alan Brown, returning from a four-year exile at Hillsborough and not welcomed by many of the older generation who regarded him as responsible for the club’s first relegation in 1958, for taking six years to get back and then for walking out after promotion had been achieved. His second spell started badly and got worse. This game at Molineux was the fourth consecutive defeat and it left us in serious danger of relegation. Fifty years on, nothing has changed bar the colour of the team’s shorts.

Molineux (or the Molineux Grounds to give it its former title) was one of the most distinctive stadiums in England and was “known” to many due to its numerous appearances on television in the 1950s. The highlight of this black and white stardom was in 1954, when the Hungarian army team, Honved, appeared at Molineux, months after the Hungarian national team had thrashed England 7-1 in Budapest. Ferenc Puskas and Sandor Kocsis, stalwarts of the Magical Magyars, were in the Honved team and they went 2-0 up before most of the crowd had smoked their first two Woodbines, Senior Service orPark Drive. (Other lung rotting cigarettes were available). 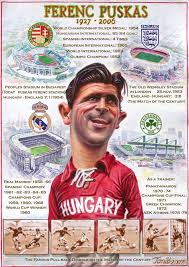 A penalty by dashing winger Johnny Hancocks got the Wolves back into the game before half time and manager Stan Cullis, a man who made no nonsense managers look like namby-pamby softies, instructed his team to go long ball. This they did and the Honved team, who may have quaffed a pint or two of Banks’s beers too many, withered, allowing centre forward Roy Swinbourne to score twice towards the end, to add Honved’s scalp to those of a South African XI, Celtic, Racing Club of Buenos Aires, Spartak Moscow and Maccabi Tel Aviv in a series of spectacular fixtures under the floodlights and in front of the BBC television cameras and Kenneth Wolstenholme.

As a result of this and to counter Cullis’s claim that the Wolves were the finest team in the world, the French paper L’Equipe (M.Salut’s lunchtime reading whilst waiting for the hairdresser to reopen after his obligatory three hour break) prompted the organisation of a tournament to find the finest team in Europe and therefore the world. This begat the European Cup which spawned the monster that we now know as The Champions League – a competition that, nowadays, is for far more than champions. The FA, showing a typical British fear of anything European, refused to partake at first and it was Real Madrid and Reims who conducted the inaugural final in a tournament that was based on a two leg knockout format. The concept of “the group game” was left to FIFA for the World Cup.

By 1968 and my first sight of Molineux, Wolves glory days were behind them and they had departed the First Division at the end of 1964-65. After a couple of seasons rebuilding in Division Two, they came back under the management of Ronnie Allan, a former West Bromwich Albion and England forward and were just about coping with Division One.

The Wolves team was;

There are a number of players who are sure to appear in the Wolves Pantheon.

Phil Parkes played 303 first team games for the Molineux outfit and wasn’t the one who used Cossack hairspray.

Derek Parkin, born in Newcastle, played 501 league games for Wolves after signing from Huddersfield Town and is a genuine legend at the club.

Derek Dougan was a character with a capital C. He had slid down the leagues after a promising start at Blackburn, where he had played against Wolves in the 1959 FA Cup Final (despite handing in a transfer request the day before the game) and had ended up at Peterborough United. A move to Leicester City got him back on track and he became a hero at Molineux, scoring 95 goals in 258 games. He loved the club so much that he headed a consortium that bought it when they were on their uppers in 1982. He reignited interest in a similar way to that of Niall Quinn and like Quinn, left after a disagreement with the major shareholders. Unlike Quinn, he made a couple of court appearances and became involved with UKIP, appearing on Question Time when it was broadcast from his native Belfast before the 1997 election. When he died in 2007, the service was relayed to crowds outside the church in Wolverhampton and he was inducted into the Wolves Hall of Fame with Kenny Hibbitt, who is still with us and who was plying his trade at Bradford Park Avenue at the time.

The game was not a classic. Dougan opened the scoring in the 36th minute and Mike Kenning converted a penalty in the 56th. George Herd pulled one back with two minutes left, but it was a fourth successive defeat for us as we looked to be likely candidates for the drop. The next game at Brammall Lane was to define our season……

Molineux has changed an awful lot since then. The distinctive Molineux Stand, with its multi-span roof and prominent clock was a standout at that time. Painted in Old Gold and Black, it was a fine example of 30s football architecture and was the backdrop for many live and recorded games from the ground. It’s unrecognisable now from the one that I visited in 1968. By the 80s it was a wreck but is now a very tidy, well appointed stadium which should be hosting Premier League football next season.

We would be happy with a continuation of Championship fayre.

2 thoughts on “The First Time Ever I Saw Your Ground: the company of Wolves”

Next Post
Wolves Who are You?: ‘fond of Sunderland but you’ll suffer a mauling’