Malcolm Dawson writes……….with M Salut sunning himself in the Caribbean, it is time I suppose, that one of us pays a somewhat late goodbye to two of our outgoing players. I kind of remember that after the pre-season friendly at Bury and the subsequent (for me) underwhelming signing of James Vaughan, I was trying hard to avoid being a doom and gloom merchant by predicting a relegation struggle in the season ahead but I commented that we looked like a Championship side signing League One players. With James Vaughan it looks like that’s what we got. Vaughan worked hard and put himself about in a Sunderland shirt but then so did Jozy Altidore and on occasions Adnan Januzaj. Ultimately neither of those two became consistent match winners and barely justified the club’s investment in them. Neither has been a great loss and in Altodore’s case the deal which brought Jermain Defoe to the Stadium of Light worked in our favour. I don’t see James Vaughan’s departure as any great loss either, though it leaves us woefully weak in the striking department until/unless Coleman can bring in a couple of the targets he is reportedly working toward securing. So goodbye James Vaughan. Your time on Wearside was brief and barely memorable. 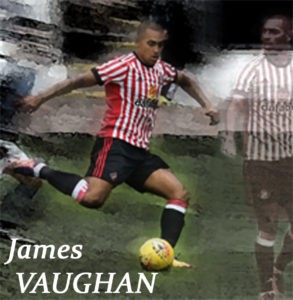 Also goodbye to Mika Dominguez. Brought in very much as a third choice keeper to occupy a place on the bench should either of the incumbents, Jordan Pickford or Vito Mannone suffer injury, the Portugese never played for the first team, though I did see him once at Eppleton playing for the Under 23s. He did OK, but the fact that he has been released from his contract and Max Stryjeck recalled from Accrington Stanley, when the two first choice keepers are Ruiter and Steele, is a fair indication of how the coaching staff feel he would cope in the hurly burly of a Championship relegation scrap. I can understand him wishing to be released from his contract if he wants to play regular football and not just pick up a pay cheque.

Unfortunately the same can’t be said for Jack Rodwell though if I was on 70 grand a week I think I’d be reluctant to give that up too. Rodwell is reported as having said that he is available for selection, but the manager has also stated that he doesn’t want to play for Sunderland. Bearing in mind that the money he gets in a week, takes many of those who pay to watch Sunderland three years or more to earn, this is just another example of the distance now that has come between the modern game and the ordinary man or woman in the street. With his brothers in arms, Kone and Ndong in similar situations, getting money for nothing, it is obvious that the club is in dire straits.

So fare thee well James Vaughan and Mika Dominguez. Good luck at Wigan and wherever. To the others who have expressed a wish to leave all the best in your quest to go. The sooner the better in my view and if you don’t get the move you crave this month then at least do the decent thing and roll up your sleeves and give your all on the pitch. I’d like to say it’s the mugs who turn up each week who pay your wages and deserve better, but we all know that it’s those who watch in the pub, at home and on their phones who really fund your inflated pay packets.

3 thoughts on “View from the North West Corner: a belated bye bye to James Vaughan”

Next Post
The first time ever I saw your team: Hull City