John McCormick writes: It’s appropriate as we look towards Hull, well known Capital of Culture, that we get into the spirit with a contribution of our own. And who better to provide it than Wrinkly Pete.

Pete, via the Bard, poses an interesting question:

Has the loan system served us well, or not?

What do you think? Did Danny Rose get more from us than we got from him? What about Johnny Evans (got us up, kept us up)? And what of all of those others, up to and including Grabban? Or perhaps you might be thinking of loans out – Borini, Khazri and Lens spring to mind.

Pete’s not a fan of the loan system. In this post he makes his case and then we open the floor with a poll which gives you a chance to give us your opinion, after which you’re welcome to leave a comment. So without much ado,

“Neither a borrower nor a lender be”

The full quotation – and its relevance to SAFC – follows.

“Neither a borrower nor a lender be; For loan oft loses both itself and friend, And borrowing dulls the edge of husbandry. This above all: to thine ownself be true, And it must follow, as the night the day, Thou canst not then be false to any man”. 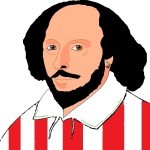 I feel I may have misjudged my literary audience with my Dickens articles, so this – by Lord Polonius from Shakespeare – Hamlet Act 1- should help redress the balance. The specific relevance is in the word “false” and my opinion that the use of loan players is simply wrong.

I will be the first to admit that I have loved watching the likes of Welbeck and Alonso playing for us but cannot believe that it has been for the long term benefit and development of the club. I listen to all the arguments about cost and improvement to existing players by playing alongside these superb talents but I am convinced our use of this arrangement has held us back (“to thine ownself be true”).

Personally I view it as a short term fix; just like the ditching of managers. Yes, it can be argued that our removal of managers has worked in as much as (apart from last season) each time it has secured us Premier League status. However, it has meant we have had no continuity of playing style nor coaching which has, in my opinion, led to our eventual, inevitable, failure (“And it must follow, as the night the day”).

In the same way, by using loan players, unless you were to permanently enlist them at the end of their loan period, it means that whatever benefit was achieved by their presence is lost when they depart.

Thus – see how I am staying in favour with Monsieur Salut by avoiding starting a sentence with “so”? [I do it all the time – Ed] – although I do not wish to see us relegated again at the end of this season, I shall question the wisdom of more loan acquisitions in January. To support my argument, I draw attention to “our” recently departed Lewis Grabban. Some will say “Where would we be without his goals?” I say that we would probably (still) be bottom but might just have got goals from elsewhere and have progressed the career of “one of our own” (“dulls the edge of husbandry”) rather than a “want away” loanee.

Now (avoiding “so” again!), as my festive season was ruined by Manflu, I shall have my amusement a little late and indulge in a fun selection of best and worst loan elevens that I have seen in the ten seasons that I have been present at most of our games, courtesy of friends I have made in the Heart of England branch of SAFC Supporters Association.

Accordingly (no “so” again!), I give you my WORST eleven, set out in 4-4-2 formation without goalkeeper, as this is one position we have not seemingly needed the loan system, together with the season of their loan:

I guess you will have issues with my choices and the formations, indeed I did find it hard to identify midfield loan players. However, I hope you can agree that there is a gulf in quality between the best and worst of these loan players which then to my mind begs the question: “Were those particular loan players any better than our own Academy players?”

“Thou canst not then be false to any man”

Over to you. Here’s a simple poll, and additional comments would be very welcome.

*Gratiano, in The Merchant of Venice

4 thoughts on “Wrinkly Pete says: to be or not to be a borrower, that is the question”

Next Post
Sixer’s sub’s soapbox: Grounds for pessimism after Cardiff