John McCormick writes:  I visited the Statcat to check if we played Sheffield Wednesday in 1968 as I had memories of their supporters in the back room of the Cambridge when I was still an underage drinker. I found I could have been out a year in either direction as we were in the same division as them for a number of seasons, and they even went down with us at the end of that decade. I reckon I would have been at most, if not all, of those home games.

But I’m pretty sure I wasn’t there in April 1965, unlike a certain Pete Sixsmith:

Welcome to The Owls, who make their first appearance at The Stadium of Light since September 2006 when a Grant Leadbitter goal gave us a win which lifted us to the giddy heights of 14th in the Championship. What would we do for that placing now, fellow travellers? The team that day contained Dwight Yorke, Tobias Hysen, Stan Varga and Kenny Cunningham, with Wednesday fielding Chris Brunt in their starting X1. The crowd was 36,574 which will be probably be double the number who give up an Easter Monday to indulge in one of the most extreme forms of sadomasochism known to the human race i.e. watching a Sunderland team slip into Division One……

Fifty three years ago, on the 28th April 1965, I had my first sight of Sheffield Wednesday as they pitched up at Roker on a Wednesday night to wind down the curtain on what had been a mildly disappointing season for us. Alan Brown, guide and mentor to so many, had left in the previous summer to take over at Hillsborough and the Board of Directors in their infinite wisdom, decided to wait until mid-November before appointing George Hardwick as manager. A “Selection Committee” chose the team based on input from those coaches who remained (Arthur Wright, I think) and they even signed players as Sandy McLaughlan, John Parke and Harry Hood crossed the border from Scotland to don the red and white shirts – or in Sandy’s case, the green jumper.

Hardwick did a solid job and guided us to a relatively secure place in the (then) First Division before his contract was not renewed and former Scottish team manager Ian McColl took over. The former Middlesbrough and England full back was a very different figure from the austere Brown. He was a man for whom the cravat may well have been invented and with his pencil moustache and fine head of hair, he created a positive impression. Many were sorry that he left.

Whether he knew that this Wednesday night game was going to be his last, I know not. He did give a couple of the fringe players a game that night, including one who had friends on the bus that M Salut and me now travelled on due to the demise of the rail links to Sunderland.
George’s Last Team (with a nod to Alan Bleasdale) was;

One of the men who ran the bus, Billy Reilly, was a friend of the Slack family and was as proud as the proverbial Punch when he ran out at Roker Park that night. Not that there were many there to see him make his second and final appearance for Sunderland as only 22,467 turned up for a game that had nothing riding on it and took place on an evening where there was ample overtime in the Wearside shipyards. The Central Coaches bus, run by Billy and Kenny Snowdon (still with us, complete with magnificently hirsute chest) wasn’t very busy that night and I can’t remember whether M Salut was with me or not. The game was unremarkable as goals from Lennie Ashurst, George Mulhall and Harry Hood (who bore a striking similarity to Ian from Middridge who usually sat at the front of the bus) gave us a comfortable win and made sure that we finished well away from the relegation scramble at the bottom.

Wolves and Birmingham City went down with barely a murmur, with the demise of The Wanderers provoking much discussion. Their fine team of the late 50’s and early 60’s had broken up and the new players cared little for the style of manager Stan Cullis, a man who made Alan Brown look and sound like a beatnik. Our promotion rivals from the year before, Dorty Leeds, had kicked on well (literally, some might say) and had lost out to champions Manchester United on goal average. Newcastle won the Second Division, Middlesbrough languished in it, while the other two (then) League clubs, Darlington and Hartlepool United, finished 17th and 15th respectively.

Wednesday had had a decent season, finishing eighth under Brown and bringing through some good young players. On this evening, they pitched up with;

Of those, Hickton moved on to Middlesbrough and became a prolific goal scorer in three divisions of the Football League, Springett was second choice keeper in the 66 World Cup and Eustace had two lengthy stints at Hillsborough before managing The Owls as well as The Cheshire Cheese pub in Hope, Derbyshire.

And yes, the outside right was Howard Wilkinson, the man who, up until David Moyes, was the worst manager since McMenemy. He played 22 times for The Owls before moving on to Brighton and Hove Albion and then Boston United, where he started his managerial career. 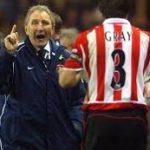 He joined us after Peter Reid left and oversaw two wins in twenty games, the nadir coming when we managed to score three own goals in seven minutes against Charlton Athletic. His tetchiness was well displayed that day when he questioned the qualifications of a journalist who had asked him about the team’s abysmal form. The journo replied “Forty three England caps – fifteen as captain.” It was Jimmy Armfield………

This  video was posted on Youtube by  Echoes of Shildon’s Past on 26 June 2017. The accompanying commentary says:

1 thought on “The First Time Ever I Saw Your Team: Sheffield Wednesday”

Next Post
SAFC vs Sheffield Wednesday prize Guess the Score: can we do it again?