The hot spell appears to be coming to its end in the North-West. It’s cloudy, the temperature has dropped and there’s rain forecast for the weekend.  Nevertheless, we’ll persist with Pete Sixsmith’s summer photo for now, especially as a lot of dark clouds moved away from the Stadium of light on Saturday.

We’re not the only place to have experienced a shift; dark clouds have also moved away from a certain town in the County of Bedfordshire. If you think we have had problems you should spend some time talking to Luton fans, something I’m sure Pete will have done on his previous visits:

And here we go again, back on the road, the length and breadth of England on a tour of some of the lesser footballing outposts of England. With Rochdale, Fleetwood, Accrington, Wycombe and Kingston-upon-Thames to come (it’s where AFC Wimbledon play), there are new places to visit, new breweries to seek out and new grounds to watch Sunderland on. An unexpected and unwanted consequence of relegation…….

First up is Kenilworth Road, Luton. It’s a ground that is probably loved by fans of The Hatters and possibly by nobody else. It’s 11 years since we last visited, on the final Sunday of the Championship season with promotion clinched the week before, after we beat Burnley and Derby County lost at Selhurst Park.

It was a carnival day; promotion was celebrated and the title was a distinct possibility if we won and Birmingham City drew or lost. They lost 0-1 at Preston North End and, as I am sure few need reminding, we crushed Luton 5-0 with Anthony Stokes, Daryl Murphy (2), Ross Wallace and David Connolly scoring.

Luton were relegated that season along with Leeds United (who stayed there for three seasons and were humbled in the FA Cup by Histon) and Southend United, and thus began a nightmare for the Bedfordshire Boys.

On the field they were poor but off the field they were a disaster. They slid straight through Division One and then had 30 points deducted for serious financial irregularities which dumped them in what was then the Football Conference. They spent five seasons at this level, missing out in the playoffs three times before they came back to the Football League in 2014.

Since then, they have consolidated in Division Two and, under Nathan Jones, widely regarded as one of the brightest managers in the lower divisions, they were promoted last season. Jones has two wise old birds to help him in Paul Hart who is his assistant and Mick Harford, who is the Chief Recruitment Officer. He may well have divided loyalties for this one.

My first visit to Kenilworth Road was on May 1st 1974. Luton had clinched promotion to Division One on the Saturday 15 points behind Middlesbrough and 1 ahead of Carlisle United. We finished sixth, 3 points behind Olga the Fox and her chums and, had we not started so badly, would have been back in the top league two years before we actually were.

The game was played on a Wednesday evening. I drove there with Sixsmith Minimus (Mike) as we were both off school – me as a teacher, him as a Sixth Former. In those days, Durham County Council, being a Revolutionary Socialist Organisation, took May Day as a holiday – the actual day, not the nearest Monday to it. I skipped the Karl Marx Afternoon of Fun, Frolics and Fooling Around with economic Theory and The V.I. Lenin seminar on why Stalin was a nasty man who never washed his neck and who smelt a bit of wee, and took off in the trusty VW Beetle to Luton.

The trip down was enlivened by the news that Alf Ramsey had been sacked as England manager and that Bob Stokoe was a possible candidate for the job. In those days, there was no 5Live or TalkSport (thank goodness) and it was news with the odd comment by Bryon Butler on the sports news on Radio 2. There was no Chris Sutton or Robbie Savage or, heaven forbid, Alan Brazil yapping on endlessly. What bliss it was to be alive…….

We stood in the end where the Luton support sits now. In 1974 it was uncovered and there was little need for segregation. The crowd of 20,285 were in rare good humour as they looked forward to welcoming Arsenal, Liverpool and Leeds United to their homely ground – but not Manchester United, as they had been relegated on the Saturday when Dennis Law scored the most famous back heel in Football League history. It didn’t relegate them as they needed to win, but City fans have relished that day ever since.

Husband and Hindson both had Newcastle connections, the former was born there, the latter played for them – and so did the referee.

That was Bob Matthewson who had been born in the city and had played for Byker Boys Club before joining Bolton Wanderers and subsequently Lincoln City. He didn’t play many games for either The Trotters or The Imps so he went back to Lancashire, worked in the aerospace industry and took up refereeing. As an ex-pro, he was fast tracked through the system which in those days was much slower than it is now. 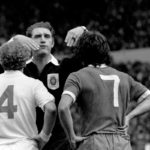 He is best remembered for sending off Kevin Keegan and Billy Bremner in the FA Charity Shield at Wembley three months after this game and he also ran the middle in the 1977 FA Cup Final but it seems incredible now that a man who must have had some allegiance to The Great Satan On The Tyne would be allowed to referee a Sunderland game.

I gather now that referees, when appointed, must say which teams they support and which teams they would feel uncomfortable refereeing which is why, in our Premier league days, we never got Jon Moss (one of us), Mark Clattenburg or Michael Oliver (Mags).

It was a cracking game. Billy Hughes put us ahead in the third minute only for Jimmy Husband to level in the 18th. Back we came and Tony Towers restored the lead in the 26th only for Husband to equalise in the 31st. Jackie Ashurst scored his first goal for the Lads four minutes later and the frenetic pace continued as Barry Butlin made it 3-3 in the 41st.

Players and crowd deserved a breather after all that and there was but a single goal in the second half. It went to us and it had to be scored by Vic Halom, a former Luton player. Hands were shaken at the end between supporters and as Luton looked to a bright future, we had to face another season at a level we thought we shouldn’t be at.

Luton lasted a season in the First Division and we threw promotion away the year after, losing the last game at Aston Villa as the three relegated clubs (Villa, Manchester United and Norwich City) went straight back up. We also lost Dave Watson in the close season to Manchester City, with Jeff Clarke coming in part exchange and Rod Belfitt (complete with Peter Wyngarde sideboards) went to Fulham on loan and then to Huddersfield. 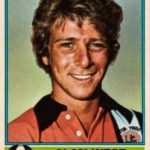 Luton were captained by Alan West (right) who they had signed from Burnley for a considerable fee at the start of the season. He should have been playing for us as he was to be the first signing after the FA Cup win but a medical suggested that there was a problem with his heart. He reckoned there wasn’t. moved to Luton and played 285 games for The Hatters. He became a pastor at the Luton Christian Fellowship and was the club chaplain until his retirement last December.

The Eric Morecambe days are long gone and so, fortunately, are the David Evans ones. He was a particularly unpleasant Tory MP who, in an attempt to ingratiate himself with Margaret Thatcher, introduced a Members Only Scheme at Luton with the express intention of keeping visiting supporters out. They lost a lot of good will over that and it has taken them many years to get their good name back. A new ground would help; this could possibly be the worst one we visit this season.

Martin Fulop  posted on Wikipedia by Lynchg, 2010.  Denis Law backheel posted on Youtube by Pete Stein 18 May 2006. Luton v Sunderland 2007 posted on Youtube by atkin2000 on 12 May 2007. If there is any copyright claim, not answered by ‘fair use’ exemptions, on the videos and other images used to illustrate this report, please make us aware and we will add credits or remove as requested.

10 thoughts on “The First Time Ever I Saw Your Ground: Luton Town and Kenilworth Road”