Following a lot of public criticism of one of our players by followers of The Black Cats, Malcolm Dawson appeals to lovers of social media to consider the effect their negativity might have on the season’s prospects.

Like most football followers I use the internet to find out what is happening with my club, especially with regard to transfers, injuries etc. There is no doubt that the internet is a great way to do this but it can also lead to laziness, sloppy reporting and outright plagiarism.

A few years ago I read an article which I recognised as one that M Salut had written and published on this website. But not only had the contributer not contacted Colin for permission to use it, he had not even credited him as author. It was a pure copy and paste job to which this particular blogger had added his own name. I contacted Colin who got in touch with the website and I have never seen a repeat but trawling various headlines for information and coming up with the same re-hashed material is commonplace these days. I doubt whether the veracity of the original report is ever checked and then suddenly Tino Asprilla has become a Darlington player or Martin O’Neil has become the manager of Shepshed Charterhouse. Oh hang on a sec those things did actually happen but you get my drift!

The comedien Dave Gorman in his programme “Modern Life is Goodish” looks at modern technology and how it affects people’s behaviours. For one episode he placed a card in a newsagent’s window pretending to be an elderly lady who liked jigsaws but didn’t like doing them, offering £50 for someone to do the puzzle for her. This was picked up by one of the local Free newspapers which contacted him and ran a story about it. This in turn was picked up by a national daily which ran the story and it ended up on the internet. To cut a long story short, just like Chinese whispers the point of the original story was lost, it was reported as factual in places as far away as New York and then eventually was referenced by Victoria Coren Mitchell in an episode of “Have I Got News For You”.

More than twenty years ago when primary school classrooms were being equipped with PCs and internet we stressed that children should always double check facts from more than one source and that just because you see something on the web doesn’t make it true but how many people these days get their “facts” from Wikipedia?

M. Salut well knows I am no fan of social media. Like all forms of technology it is how it is used which makes it a valuable tool or simply an embarrasing liability. There are many reasons I’m no fan of Twitter and Facebook. The fact that many so called news sites simply reproduce people’s Tweets as news is one. The ease with which those who so wish can make derogatory and inflammatory comments is another.

There is an anonymity about the internet which reduces the social restraints on people and makes them say and repeat things they might think twice about uttering aloud in public. Then again it might not but a loud mouthed, hard of thinking bigot, ranting in a back street boozer or on Speakers Corner, has a much smaller audience than those posting on Twitter, Facebook or any of the other social media platforms. 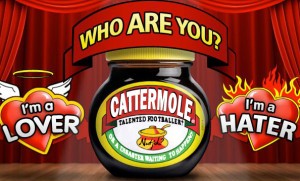 I began writing this before the earlier posting picking up on Sixer’s remarks regarding some fans’ reactions to Josh Maja but it was the treatment of another of our players on social media that prompted me to hit the keyboard. Love him or hate him Lee Cattermole is still one of ours as I write. He may or may not be off to join Gus Poyet in France but until he goes he is still on the payroll and will be until 2021 unless someone offers to sign him fulltime.

When he first came there is no arguing he could be a bit of a liability, getting himself booked or sent off, often for needless challenges in areas of no danger. His behaviour off the field left a lot to be desired too, getting banned from pubs on Teeside and finding himself with Niklas Bendtner damaging cars on Tyneside. But he has calmed down and one thing that is hard to argue against is that he never gives less than 100% commitment. He may not always be as skilful as he was, he may lose his man or misplace a pass but I have never seen him not try. But it seems a section of those who profess to be Sunderland supporters feel it is OK to vilify him on social media, criticising the manager for including him in the squad, then allowing him on the pitch and demanding the club let him go.

There are those stating that he doesn’t want to be at the club and criticising the manager for putting him on ahead of O’Nien on Saturday. Can I assume that those informed comments come from people who socialise with Cattermole and work at the Academy of Light? Thought not. Personally I’ll trust Jack Ross. He works with the players. He knows who has done what in training and how they are reacting to the many changes that are happening just now. If he says he’s talked to Catts and the player is doing what is asked of him then by all means the manager should decide who is in the best place to carry out his plans. O’Nien has so far played just over 45 minutes and has had to uproot himself and move to a new part of the country, get settled and get used to a new club, manager and demands on the way he plays.

I thought JR’s comments about Jack Baldwin interesting. Moving house is stressful for anyone but how much so is it for someone like Max Power, who one minute is sat in bed watching Netflix (he says) on his laptop then two days later, having packed his boots, a toothbrush and a spare pair of pants finds himself running out with ten new team mates at Kennilworth Road. Must be even harder for family men with partners and children to get settled in a new home.

It could be that Catts is on his way and by the time this is published a deal might have been done. Even a loan move after all, would free up some of his wages and allow the club a little more flexibility on loan players coming in but he is on a contract and unlike some others is honouring his commitment while still on Wearside. I suspect Lee Cattermole is the type of player who will be motivated, rather than harmed by negativity but what we need at this point is a unified club moving in the same direction and that includes the fans. Supporters support the team by definition. Now is a time when we all need to be seen to be as one.

It’s early days, there is still progress to be made but this type of public criticism is not helpful and might even affect the mental approach of some of the others in and around the team or those players the club is hoping to bring in.

As was said in one of the better pieces I read recently, Lamine Kone is not a bad player but he certainly performed better when he was a happy player.

8 thoughts on “View From the North West Corner: give Catts a break”

Next Post
After a four-point start to the season, it is time for the carping to stop?