John McCormick writes:  I was in with a chance of a mug for new baby James for almost an hour on Tuesday, then Oviedo got that red card and everything changed.

And, I suppose, I’d better withdraw myself from this week’s competition as it seems a bit unfair for me to get my prediction in before anyone else has a chance. I’d be going for 0-2 (Sinclair and Power) so that scoreline’s open to another reader.

There’s no need for you to feel guilty about taking it and depriving my grandchild; I’m sure James won’t mind waiting. After all, I’ve been saying 2-0 since we were a Premiership club and it still hasn’t happened.  Another two weeks won’t matter.

Here’s a picture of what a Sunderland-supporting winner could get: 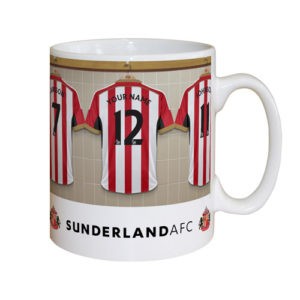 You get to choose the names on the shirts, and a Bradford supporting winner would get a design more to his his/her taste.

17 thoughts on “Bradford City: Guess the Score. You might win a mug. But then again…”

Next Post
Sixer’s Substitute’s Peterborough Soapbox: entertaining night at the Stadium of Light