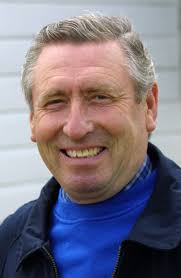 Nick Barnes posted on his Facebook page that Frank Johnson had died.

For those who no longer read newspapers (the majority of the population now), Frank was the long serving Sunderland reporter on the Northern Echo and he covered events at Roker Park and The Stadium of Light from the mid 1960s up to his retirement in 2007.

In his day, each of the North East’s five Football League clubs had a dedicated correspondent. Frank was ours, Nick Scurr reported on events at the soon to be Sports Direct and Ray Robertson had the ‘Boro beat. The Darlington one changed frequently – Bob James and Ray Parker are two that I remember- and Jack Fletcher was the ‘Pools man.

I knew Frank a little as he used to travel on John Tennick’s away bus after he had a barney with club officials on the team coach. Always well turned out with an immaculate coiffure, he sat at the front and yarned away with John and George Forster, occasionally passing the time of day with those further down the aisle and feeding (very) small scraps of information from the inner sanctum of the manager’s office.

He saw the club fail to establish itself in the First Division in the 1960s, witnessed the FA Cup victory over Leeds United and travelled to Budapest by train for the first (of two) European away games in the club’s history. If my memory serves me correctly, he did it with a guy from Chester-le-Street called Lenny Blackbird, a Sunderland supporter who had extremely long hair. Frank survived to tell the tale.

He was there for numerous relegations and promotions, saw a crumbling Roker replaced by a shiny Stadium of Light and reported on more managerial changes than any sane person would care to count. From Alan Brown through to Peter Reid, he saw them all.

As for players, he had to write about the sublime skills of Jim Baxter, the love affair that Charlie Hurley had with Wearside, the strength and power of Dave Watson and the sheer pace of Marco Gabbiadini. He also strove to find something good to say about Steve Hetzke, David Swindlehurst and Rod Belfitt.

As the years flashed by, I would bump into him at away games and he always recognised me and had a kind word. He became more and more disillusioned with modern football, realising that the close friendships he had had with players of the 60s and 70s  would never be replicated in the modern game, and he saw those relationships as being the secret of good sports journalism.

I felt deeply honoured when he commented on a point that I had made about a game against Blackpool in January 2011 and I knew then that I had “arrived” as a respectable blogger.

My condolences go out to his family and I thank him for many years of fine (and brutally honest) reporting of Sunderland AFC.

John Mac adds – here is the piece Pete refers to, plus a second comment after M Salut repeated Frank’s first one:

Frank bows out after a career in football

Next Post
Sunderland vs Peterborough ‘Who are you?’: from Posh Spice to posh football