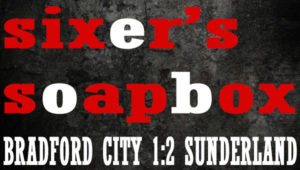 Malcolm Dawson writes…..there is an air of quiet satisfaction floating around Sixsmith Towers this morning, as the staff quietly go about their duties, secure in the knowledge that their young master is full of the joys of the season following his charabanc trip yesterday and with the prospect of Toronto Wolfpack and Featherstone Rovers, both in action later today to keep him occupied.

Following his civic duties, bringing the news of the day to the good folk of Shildon, but before his Sunday morning breakfast of kedgeree, devilled kidneys and chitterlings Peter Sixsmith found time to dash off his account of proceedings in what was an eventful day in West Yorkshire.

My age-old newspaper reading habits have taken a knock recently. The Northern Echo is a mere shadow of its former self and is often finished before my bowl of porridge and round of toast have been devoured, while The Guardian Sports section is full of the usual Premier League guff so it is largely ignored.

On Saturday, while cruising down the A1 and after having avoided pieces on Jose Mourinho and how difficult it is spending money like water and then dropping the players that money has been spent on, how a new Arsenal are evolving at Ashburton Grove and the trials and tribulations of Tottenham at Wembley (all to be repeated ad infinitum), it was a pleasure to read about how Jack Ross has settled into the job at Sunderland and how, every time that we win, an anonymous Sunderland supporter donates a goat to a charity that distributes them to villages in Africa – or maybe Eldon Lane.

After a thrilling game at Valley Parade, the African goat population has increased by one and, if the season continues in this vein, there will be a surfeit of goats in villages and the locals will be urging the donor to send PlayStations instead.

This was the proverbial hard-fought win. We went in 1 up at half time, never looked in trouble, conceded a poor equaliser, retook the lead within two minutes, saw our new captain give away a penalty and get sent off, watched as the penalty was saved, comfortably survived an aerial bombardment not seen at Valley Parade since the days of Ian Ormondroyd before we closed the game out while witnessing a brawl that was more in keeping with the original use of the ground as a rugby league venue. No wonder the coach travellers slept on the way home; we were knackered.

The first half was another example of how Ross would like us to play. The ball was knocked about, forcing the City players to chase and harry and use up lots of energy while we passed and passed. At times we stretched their defence and chances were missed although the referee did not pass up his chance to book Cattermole with a mere ten minutes on the clock.

It was for an innocuous foul, one which other players would have got away with (and did) but it seems that there is a policy amongst the lower league referees of “let’s see how early we can book Cattermole.”

He now had to play 80 minutes without one false move, something which he accomplished with considerable aplomb and made some of us believe that the earlier the yellow card for Cattermole, the more effective he is because he has to concentrate on his game and not do anything silly.

He contributed to the opening goal with a fierce shot which was going fractionally wide until Maja turned it in as it brushed past his left kidney. The Goat Shop were preparing the next departure to Africa by half time as we controlled the game and Bradford’s huffing and puffing barely disturbed anxiety levels amongst the 2,900 who had made the trip.

The second half was a different experience and the goat looked as if it might be staying in the UK when we failed to defend a long throw and O’Connor hooked the ball into the net. However, its passport was out again two minutes later when the ball bounced around in the box and Jack Baldwin opened his account for the club with a firm shot.

In the next ten minutes we could have wrapped the game up and the goat could have caught an earlier boat. Max Power had a shot well saved by O’Donnell and Tom Flanagan (who formed a very effective central defensive partnership with Baldwin) had a header pushed over.

It all changed in the 66th minute when Power was sent off. Being at the other end and thinking of the goat saying its goodbyes, I did not see what had prompted the newly appointed skipper to kick out at Jack Payne. But I did see the kick and the subsequent red card for Power who will have now missed more games through suspension than he has played. I foresee an anger management course for him before he returns and he may not get his place back if we continue to purge the national goat herd.

Up stepped Payne, the protagonist in the Power situation, to take the penalty. He is a confident, nay cocky, youngster, but he was not good enough to beat the Magnificent McLaughlin, who pulled off a tremendous save or the Fantastic Flanagan, whose tackle as Payne lined up to slot home the rebound was as good as the original save.

Maja was replaced by McGeouch and we proceeded to give an almost master class in game management. The ball was retained when we needed to and despatched to the other end of the field when that was necessary. Honeyman came on for McGeady and his running and energy played an important part in preventing a limited home side from putting any real pressure on us.

When he signed for us, some supporters were distinctly underwhelmed by Chris Maguire, claiming that a man who had flopped at Bury was not for us. He has shown that if he is on the right stage, he is a match winner. That turn against Peterborough where he set up Sinclair was a as good as anything I have seen since the halcyon days of Johnson and Summerbee and today, he made sure that the sting was taken out of City by holding the ball up, winning free kicks and generally winding up players who were unsure of how to handle him. He is enjoying being at Sunderland and we are enjoying watching him.

Both full backs did well. Matthews has formed a good partnership with Maguire and gets forward well while Reece James, now third choice in that position, was targeted by Bradford and Sean Scannell in particular, never missed an important tackle and did really well.

In fact, there were no weak links in this team. All worked hard, none more so than Lee Cattermole, who won umpteen headers and tackles and was always there to fill a gap, pass a ball and generally wear down the opposition. I gather he is happy at Sunderland but the size of his wage packet and the length of his contract may be a factor in any possible transfers to a higher division.

After Mr. Backhouse had added on seven minutes and Ross showed his tactical acumen by sending on Ozturk to bolster the defence, the final whistle went and, at a certain goat farm somewhere in England, a Ms. N. Goat was shaking hooves with her friends and hugging her family as she began the long trek to Africa. Her final words were “Don’t worry. We won’t be apart for long. I can see another 25 of you joining me before the first week in May. Ha’way the Goats.”

My journey home was a pleasant one. All on the coach behaved, there was good conversation and the icing on the cake came as the we paused at the traffic lights at Thinford and Alexis Sanchez scored the winner at Old Trafford.

No goats for the black and whites then………