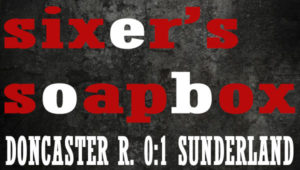 Another away day (or night), another significant win for Sunderland. Pete Sixsmith expects to see quite a few victories this season as Jack Ross’s resurgent squad continues to impress. There’ll be disappointments along the way but three away wins in a row, if it represents a trend that can be maintained, is automatic promotion form …

As the latest goat packed its bags and headed for Africa, it may want to reflect on what was our hardest earned win this season against the strongest side we have played thus far.

He (or she) may also want to prepare the way for a large number of goats that could well be arriving between now and the end of the season because I think we are going to be winning a lot of games in the next six months.

This was an excellent win, fashioned on the training ground and inside the heads of a set of players who have clearly bought into the philosophy of the manager and his coaching staff. Each player is given a specific job and then goes out and does it. This has not happened under the previous three incumbents of the hot seat and only for a dozen games under Sam Allardyce when he got the Three Ks to show the rest of them how to play football.

Jack Ross does not have the talents and abilities of those that Allardyce had at his disposal.

What he does have is a group of hard working players who listen carefully, are well prepared and who clearly enjoy playing for a club whose history, facilities and support mark them out as one of the top clubs in England.

Some of them know that they are playing for Sunderland because the club had been awful for a number of years and that they may only be on Wearside for a short time but they seem to be determined to enjoy it and make a name for themselves as the likes of John McPhail, John Kay and Colin Pascoe did over 30 years ago.

Players like Tom Flanagan, who appears to enjoy playing for new town teams (MK Dons, Stevenage) and Third level stalwarts (Gillingham, Plymouth Argyle) before getting a whiff of the almost big time at Burton Albion.

Signed on a free transfer, he has taken full advantage of Glenn Loovens’s injury and has established himself as a commanding and highly competent central defender. He had an excellent game at the Keepmoat Stadium and played a huge part in helping us to keep a clean sheet for the second successive game.

He was aided and abetted by the increasingly impressive Jon McLaughlin, Edinburgh born but Yorkshire domiciled, who joined us from Hearts, His cv includes early spell at both Harrogate clubs – Railway and Town – and then spells at Bradford City and Burton Albion before spending a season at Heart of Midlothian.

He has looked cool, calm and collected all season (such a contrast to Steele and Camp who were more bewitched, bothered and bewildered) and he made sure that we did not lose this one with two saves in the closing 30 seconds of the first half.

The first came when naughty boy Marik Willis took advantage of poor marking and bore down on goal. The Mighty Mc came off his line and got his hand to a not very good attempt at placing the ball by the Leeds United loanee and Jack Baldwin completed the clearance.

No sooner had Mc got up and dusted himself down when Matty Blair broke away. Faced by a man who had started his senior career at places like Ossett Albion, Clitheroe and Stocksbridge Park Steels (where he may have come across Jamie Vardy), Blair froze and allowed our splendid keeper to make another fine save, this time with his feet.

It allowed us to go in level at half time and within two minutes of the restart we were ahead.

The goal was scored by Chris Maguire who turned the ball in from close range and made even bigger fools of those at Bury who found him hard work last season.

But the spadework was done by two players who have lived through the worst times in the 128-year Football League history of Sunderland AFC.

Lynden Gooch must have thought seriously about leaving in the summer. He had suffered back to back relegations, had lost his place in the USA national squad partly as a result of that and he was in and out of the side. Again, Ross and his coaching staff saw something that they could work on.

The result of that was the reinvigoration of Gooch and a regular place in the team. Restored after injury, his energy and trickery caused problems for the solid Rovers defence in the first half.

At the start of the second he ran at them, bamboozled two defenders and hit a good shot across keeper Marko Marosi which rattled the post and came out to Adam Matthews.

Matthews is a player who has rarely convinced but who has looked far better this year. He gets forward well and does his defensive jobs effectively. It could be that he is playing at the right level but credit must be given to a player who has endured some nightmares in a Sunderland shirt and who appears to be enjoying his football again.

Matthews knocked it in quickly and there was the impish, roguish Maguire to score in front of the 4,000 supporters who had made the effort to travel to the game. My views on Maguire have been made clear since the Scunthorpe game – he is quality and it is players like him, Gooch, Maja and (possibly) McGeady who give us something different in this league.

There were other good performances as well. McGeouch toiled away in the engine room (great cliché; I was saving that one for Ndong, but never quite got round to using it) and was always available. He also tackles well and reads the game effectively. Ross rates him and Power will not walk back into the team when his latest ban is over.

Sinclair was given the unenviable task of being up front on his own against two good central defenders in Wright and Butler. He worked hard, never really looked like scoring but showed that he can play 90 minutes. He was absolutely exhausted at the end but his team mates knew what an important contribution he had made.

It was a team performance against another big, well organised side who played well against opponents they have had little to do with in the recent past.

Joe Wright was their outstanding player and I also Liked John Marquis up front, a mobile centre forward who tried to bring others into the game. Marik Willis had a good opening half hour and caused Reece James some problems but then got himself involved in an unpleasant incident with Maguire which involved an elbow and a face which many thought should have merited a red card rather than the yellow that Jeremy Simpson issued.

Mr Simpson is the epitome of the fussy referee. He waves his arms around a lot, spends time talking to players without appearing to say a great deal and brandishes yellow cards as if he were Michael Miles giving away 10-bob notes on Take Your Pick.

There were 10 in this game including Cattermole (who lasted an impressive 16 minutes before trading names with Mr Simpson) and Butler for a nasty foul on Jerome Sinclair which could also have been a red. He (Simpson) reminded me of Captain Mainwaring – all bluster and little real substance.

One thing is for sure (two if you count the goats) – there will be no cries of “We’re doomed, we’re doomed” around the club. We’ll leave that for Our Friends up the Road.

A home win on Saturday is essential if we are to build on this momentum and take us into November in a healthy position. Southend could well be tricky opponents.

6 thoughts on “Sixer’s Doncaster Soapbox: ‘SAFC will win a lot of games this season’”

Next Post
Sixer’s Sevens: hanging on against Doncaster Rovers – that’ll do nicely