John McCormick writes: The time’s right and I saw all of the players Pete mentions below, including George Kinnell, but I have only the most fleeting memories of this game.  So fleeting that the scoreline rings no bells with me, and surely it should.

Could it be that I wasn’t there and I’m suffering from false memory syndrome because I can’t bear to have missed such a score?

There’s no such doubt troubling Pete Sixsmith. He was there. He saw it. And he hasn’t forgotten:

We stay in the mid 60’s for this one, as The Posh came calling on the 18th February 1967 for an FA Cup Fourth Round match at Roker Park. 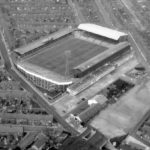 Can you picture it? Four huge floodlight pylons, one in each corner. A double decker stand running the whole length of one side of the pitch and a smaller, single decker one on the other with an art deco clock on the roof which had 1936 underneath it in large red letters. Both stands had standing areas in front of them, known up here as “Paddocks” and as “enclosures”  in less enlightened parts of the country.

Behind one goal a wide and quite steep terrace with a functional roof over it (put there two years earlier for the 1966 World Cup) and behind the other, a huge terrace which seemed to almost reach the sky and was a structure that shouted out how wonderful concrete was for building football stadiums.

With a good crowd in, there were few better stadiums in England and on this day, 43,998 made it by foot, coach, train and private car to see a Sunderland side that was beginning to stretch itself, take on a team who represented a club that eight years earlier had been playing Boston United, Horden CW and Skegness Town in the Midland League. 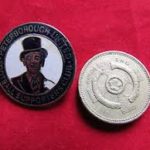 Peterborough had been elected in 1960, replacing Gateshead in Football League Division Four. They were perennial winners of the Midland League, then a significant semi-professional competition which, in 1960, had eight refugees from the abandoned North Eastern League in its ranks. Peterborough won the title by three points from North Shields with Ashington third, South Shields fourth and Stockton fifth.

Gateshead had finished third bottom of the Fourth Division, behind Southport but above Oldham Athletic and Hartlepools (sic) United, but the dilapidated state of their Redheugh Park ground and their proximity to Tyneside and Newcastle United, led to them failing to be re-elected. Peterborough, an expanding town and with a vibrant football club, were seen as a better bet than a relic of England’s industrial past and out went The Heed and in came The Posh.

They won the league, finishing ahead of Crystal Palace, Northampton Town and Bradford Park Avenue, scoring 134 goals in the process. Terry Bly scored 52 of these and commentators were predicting a rise through the leagues and a place amongst the big boys.

They finished fifth in their first season and by the time they came to Roker, they were ensconced in mid table and relegation to Division Four followed the season after. The great days of Terry Bly, Billy Hailes and company were long behind them, although they had seen off Arsenal in a Fourth Round tie in 1965 thanks to goals from Derek Dougan and Peter McNamee.

They came north looking for another upset but came across a Sunderland team that was a good mixture of youth, quality and experience.

The quality came from Martin Harvey, one of the most composed players I have ever seen in a red and white shirt, Jim Baxter, whom I idolised despite being fully aware of his heavy drinking.  (Papa Sixsmith tinkled the ivories in Wetheralls night club in the 1960’s and frequently saw Not So Slim Jim sampling the local Bacardi) and Neil Martin.

The experience came from stalwarts of the promotion side in Monty, Cec and the two Scottish Georges, Herd and Mulhall. Add John O’Hare (When we want goals, he’s always there), who went on to win the League title with Derby County and Nottingham Forest, where he also picked up a couple of European Cup winners medals, and George Kinnell, who could outdrink his cousin Jim Baxter, and we were a formidable side – for about 10 weeks.

In that time, we beat Manchester City at home and Leicester City away, drew at West Ham United and West Bromwich Albion, thrashed Brentford and Peterborough United in the cup and completed a 3-0 double over Newcastle United at Roker.

The bubble burst after defeat to Leeds United at Hull in a Fifth Round Second Replay after two epic games at Roker and Elland Road and we trailed off to finish in 17th position, 7 points above 21st placed Aston Villa who went down with Blackpool.

But this day in February was one of the best in my early Sunderland supporting days. In those days the FA Cup meant something and any manager “resting” his star players would have been dismissed on the spot. Ian McColl had no hesitation in naming an unchanged team from the one that had come back from Upton Park with a point after a 2-2 draw.

Peterborough made a couple of changes from the side that had beaten Brighton and Hove Albion the previous week;

Of those, Millington was a regular in the Wales team and Conmy was a highly regarded Irish winger who played 263 times for United and 5 for the Republic of Ireland in the company of Charlie Hurley.

It made no difference as class told and by the 18th minute, we were three up. John O’Hare opened the scoring in the thirteenth minute, Neil Martin added the second a minute later and when the effervescent Bobby Kerr made it three four minutes later, the game was over.

Martin scored his second in the 27th minute and completed his hat trick two minutes into the second half. It was 6-0 when Kerr scored again three minutes later. Tommy Watson scored the most spectacular goal of the game five minutes after that and then the game meandered to an end with only the usual imperious Jim Baxter penalty to add to the scoring.

The visitors were applauded off and we were roared off as we started to think that maybe McColl had the chemistry right, maybe we could get consistent displays from Baxter and maybe we could start saving for a trip to the Twin Towers in May.

Leeds United brought an end to that dream and within twelve months, McColl had been sacked, Baxter was quaffing Bacardi in Nottingham, Neil Martin had been sold to Coventry City and O’Hare had gone to join his old youth team mentor, Brian Clough, at The Baseball Ground.

Since then, Peterborough have had a couple of seasons in the Championship (or equivalent) and the last time they were on Wearside for a league game was 25 years ago to the day when goals from Phil Gray and Gary Owers saw us to a comfortable 2-0 win. They had Sunderland born Tony Philiskirk leading the line and former Darlington keeper Fred Barber on the bench. Five years ago, they made their Stadium debut in a League Cup tie just after Di Canio had been sacked and were beaten by the same score, with Emanuel Giaccherini and Valentin Roberge scoring.

A similar score to those will send us home happy; a 1967 score line will lead to outbreaks of optimism amongst even the glummest of Red and Whites. We live in hope.

SAFC v Peterborough video published on Youtube in Sep 2013 by A Script Like This. If there is any copyright claim, not answered by ‘fair use’ exemptions, on the video and images used to illustrate this report, please make us aware and we will add credits or remove as requested.

2 thoughts on “The First Time Ever I Saw Your Team: Peterborough United”

Next Post
SAFC vs Peterborough prize Guess the Score: more than a mug at stake