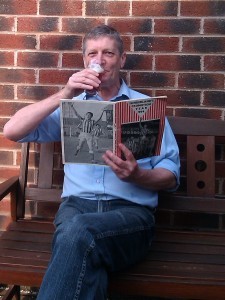 I was a Fullwell ender and I’ve stood on terraces up and down the country, including a crowded Anfield Kop during a full-blooded European night.

You might have seen archive film of the Kop; that mass of people plunging downwards has been shown often enough. The Fulwell end wasn’t so different.

But you could and often did wander during games; for a better spot when some latecomers blocked our view, to buy a pie or have a wee, and in 1968, to talk to West Brom fans and wish them well for the final.

No tickets, no segregation, and not as much danger as you’d think; accidents were rare. I remember only one close shave, when my sister tripped at the top of the Fulwell steps at the end of a game and three of us held back the people behind us while she got up. That was a truly hairy moment – really, and I mean really – scary.

Be it a football game, a rock concert, a demonstration, it’s often at such times that crowd tragedies occur, which leads me to think it’s not necessarily size or behaviour that generates danger.

Although these factors can’t be ignored it’s how people are marshalled and allowed to move at crucial phases, and how facilities are designed and signposted that matters. Think of the Ricoh this month. Standing Sunderland fans filled the away end. And where, when and why did issues arise?

Not that I was at the Ricoh. My last away trips before Shrewsbury were to Deepdale and the Macron. Like the Ricoh and the SOL, they give supporters unrestricted views of the pitch and plenty of space.

The season before brought Goodison and Anfield, old grounds with awful facilities for away supporters. Badly spaced seats and obstructed views in the Bullens, a crowded concourse and poor sight lines in the Anfield Road Stand.

Comparing old and new brings me to my point. Sunderland’s away fans stand, whether it’s legal or not, and they aren’t the only ones. In the older stadiums – the Goodisons, the Anfields – this creates danger because the facilities and architecture are so poor. Entering and leaving is bad enough but there’s also a desire to shift during games because people can’t see. They move, push and tension rises.

In the newer grounds this doesn’t happen. Everyone can see what’s going on all over the pitch. Moving means you have to take your eyes from the game, so you don’t move. Not much, anyway, until we score and you suddenly find yourself next to the stranger three seats away.

You could argue that in the Macrons, Ricohs and the like we get plenty of space because the home crowds are smaller, and there’s some truth in that, but it doesn’t alter my view – standing could be safely accommodated in many post-Taylor grounds. With older grounds it’s not so simple, though they are currently more dangerous and need something doing to them.

Parliament’s recent debate didn’t disagree:
“..Lord Justice Taylor… … did not say that standing was inherently unsafe¹.”;
“…At Newcastle United the away supporters are right up in the gods, and stand in a dangerous position.²”
(1: Clive Betts, Sheffield South East; 2: Mary Glindon, North Tyneside: Hansard, Volume 643, June 2018)

There’s also evidence elsewhere. Celtic have rail seating, as do some German clubs – more of this later – and the safety of fans has never been questioned since its installation.

Though I’m sure standing can be safe in big grounds my only recent experience comes from our visit to Shrewsbury Town, which is on the small side. Like Celtic, there’s a system to ensure entry is regulated and there’s no overcrowding or wandering around on a whim like the old days; it’s designed to be safe and tightly stewarded. Shrewsbury allow only five hundred standing fans, who do create atmosphere, and their experiment has already been deemed a success. What was noticeable, however, was that they couldn’t compete with our ,1700 impeccably behaved but standing fans after we scored. Numbers do matter.

Scaling up Shrewsbury’s 500 would give us a Celtic-sized 3,000 places. Could we do that with a bit of reconfiguring?

Salut! Sunderland’s Pete Sixsmith, who has first-hand experience from Germany, isn’t sure:

“Hoffenheim’s a relatively new stadium with a steep rake. Much of the ground has rail standing where the seats fold back and are held in place by screws and each person has a designated standing spot. In the relatively small crowd that I was part of (16,500), there was plenty of room to move about. My impressions were positive and it should be able to work on either grounds that have the old rake of steep terracing (Old Trafford, Villa Park) or very new grounds (Tottenham’s new one). Whether the rake at the SoL would allow theses rails to be installed is a question I cannot answer.”

I think it’s worth finding out. Properly regulated standing works, and it need be no more dangerous, perhaps it’s even safer, than the seats in some grounds.

An EFL/FSF survey recently favoured safe standing and the FA and EFL have decided to support clubs and leagues in having the option to choose. Words as well as actions are giving a clear message, one which is being repeated here at the Stadium of Light: people want to stand.

Fans, clubs, authorities and MPs recognise this, so why doesn’t the government? Why not accept reality and allow our larger clubs to decide for themselves? It wouldn’t suit every spectator – standing’s no longer for me – but it would be better for the game.