Malcolm Dawson writes……don’t be deceived. This was no walk in the park, though we did finish the game as comfortable winners.

More comfortable than the Sunderland supporter who appeared on Friday’s edition of Mastermind, anyway. If you didn’t see it and want to catch up on the i-player I won’t spoil it for you but I managed to get 11 of the specialised questions right to his 12 and beat him on the General Knowledge round, though admittedly I was sat at home with a brew and not in the “chair of doom” with a spotlight and a studio audience focused on me.

Mind you, he had been given the list of books which the question setters used so he could swat up beforehand but I don’t think there’ll be many red and white visitors to this site who won’t know the name of the man who bought the club from Ellis Short, the former player who wrote a book containing a blank page headed “The Average Director’s Knowledge of Football” or which club we signed Kevin Phillips from. Nothing there to get me scratching my head unless I’d previously run out of “Head and Shoulders”.

What the game, rather than the quiz show, did demonstrate is that in Jack Ross we have a mastermind of our own, who is drilling his team on the training ground so that they know their roles and can adapt to his tweaks in personnel and changes of tactics. Take Chris Maguire, for example, who started off wide left playing deep almost as a fifth defender, went over to the right when McGeouch went off and ended up inside supporting Maja after Gooch left the field.

And to the day itself.

There was a light snow falling as I pulled back the curtains on Saturday morning. It was that wet sort of snow that melts as soon as it hits the street but was lying on higher ground. I popped round early to Sixsmith Towers to collect the young master as we were due at the Stadium of Light earlier than normal for a meet up with M Salut, over from France for a few days [months! – Ed], and to enjoy pre and post match hospitality and to watch the game in the company of one Charlie Methven, with whom Colin had worked when they were both earning a crust in Fleet Street.

Because of our hope of prawn sandwiches prior to the visit of the Shrimpers, Pete and I arrived at the ground a good two hours before kick off and exchanged pleasantries with a number of away fans who had made the long trip up from Essex and who were impressed not only with the Stadium but with the welcome they had received around the city. There was also time to drop off our contributions to the food bank before linking up with M Salut inside the hospitality suite for lunch with Charlie.

Charlie is a down to earth bloke, with obvious energy and passion for the task he has undertaken at Sunderland. With apologies to the recently quietened Brian if that makes me sound sycophantic, but I speak as I find. Much of what we talked about as we enjoyed the pre-match lunch in the Riverside suite has been widely reported but some of the insights we were given were revealing. For instance, of the 52 serious applicants for the manager’s job (Pete Sixsmith’s application was not considered) two had managed England and there were some with experience of managing in the Premier League, but it was a business contact of Charlie’s, with an inside knowledge of Scottish Football, who tipped him off about Jack Ross and of the 6 applicants shortlisted Stewart Donald knew immediately after his interview that JR was the man he wanted.

I was also impressed by his remark that the owners see a football club as a civic institution, that needs to be run in an efficient business-like way and that there was something unique about the position SAFC holds within the community, something which the previous regime signally failed to recognise.

Jack Ross had also been offered the Ipswich job and, looking at what has happened this week in Suffolk, must be wondering if he too would be out of work now had SAFC not come calling, and at the risk of appearing too sycophantic for the second time we now appear to have an astute, intelligent manager who is engineering the kind of results he and we want to see by setting up his team to utilise the strengths of the players at his disposal and who is not afraid to change things around as circumstances dictate.

We started off yesterday in what seemed to be a basic 4-4-2 shape, with McGeouch and Cattermole supporting the back line, Honeyman more advanced on the left and Gooch tucking in on the right and offering support to Sinclair, but Maguire was playing a deeper role, almost as an extra left back and from our seats we could see that in fact the shape was closer to 5-4-1. 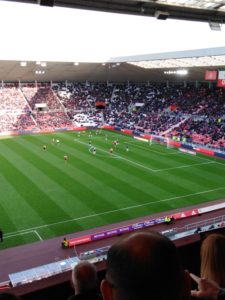 The early play was ours and Sinclair had a decent header saved. Again, Sinclair put in the kind of performance which doesn’t always excite the type of spectator who looks for the spectacular, but football is a team sport and players like him add a dimension that is not always obvious. He was instrumental in Chris Maguire’s wonder strike, of which more later.

Southend were neat and tidy and a typical Chris Powell side, as one Mr Sixsmith observed. They had a few openings but Baldwin and Flanagan are developing a good understanding and with the knowledge that they have a good keeper behind them are beginning to look like a solid pairing. They were aided and abetted by Dylan McGeouch who was the linchpin during the time he was on the field. He, along with Honeyman, has been criticised by some users of social media who display a lack of understanding about players’ contributions.

McGeouch was breaking up play in front of the back line, getting forward when in possession and distributing the ball well so Lee Cattermole, who had another outstanding game (and somehow [how?] avoided getting booked), played around the Scotsman in another example of how this squad is starting to gel.

It was Cattermole who, bursting forward on the left, sent a peach of a cross-field pass straight to the feet of Lynden Gooch, who dribbled into the box, feinted a pass to the overlapping Matthews before delivering a lovely cross which George Honeyman steered into the corner of the net with a lovely delicate header. This was a beautiful goal, the first of three beautiful goals.

Southend were still showing some deft touches and creating chances. They had needed to reorganise after left back Ben Coker fell and injured himself and it was substitute Stephen Hendrie who put in a good ball to Harry Bunn. Bunn took the ball around Flanagan but Baldwin was there to put in a slide and partial block, though it still needed McLaughlin to palm the ball out of the goal. The rebound found the number 10, Simon Cox, whose first attempt was hampered by McGeouch before he finally blasted the third effort to score over the bar to safety.

Southend also had a decent shout for a penalty waved away. We probably would have felt aggrieved had it been at the other end but it remained 1-0 at the interval, so we could enjoy our coffee and torte de fruits in relative calm. Only relative because I am rarely confident of a win until we are at least four goals ahead.

No changes at half time but Colin and I were commenting on how quiet Chris Maguire had been as Aiden McGeady was warming up and looked ready to come on. We both agreed that it would probably be Maguire who was replaced but as he collected the ball I said “now watch him score” and a split second later he unleashed an unstoppable screamer from 35 yards to put us 2-0 ahead. Watch the replay – it was Sinclair harrying Taylor Moore which resulted in the Southend man playing a hasty ball out of defence straight to Chris Maguire, who ran into space and scored with a shot even better than the one with which he had won goal of the month.

That was it and from that point Southend never looked like getting back into the game. Their fans were vocal and commenting on an unusually quiet home crowd. I hope we are not getting to the point of complacency where we don’t get excited at the prospect of “another” win.

McGeouch went off straight after the goal, and Maguire switched sides to allow McGeady to play in his preferred left wing position, Cattermole now became the pivot around which the defence and midfield operated and Honeyman and Gooch continued to hassle the Southend defence and irritate them with little attacking runs.

The hard working Sinclair was replaced by Maja who showed some lovely footwork to retain possession in tight spots and looks like the rest after missing the game midweek has done him good. Gooch was taken off as a precaution, feeling a tight hamstring, and the introduction of O’Nien allowed Maguire to take up his third position of the game.

McLaughlin had a relatively quiet game but had another occasion when he needed to save with his legs but after a bit of ping pong the defence rode that storm on their way to another clean sheet.

The third goal came with around ten minutes left on the clock and started with a long, accurate kick out from our keeper. Maja, just inside the Southend half, held up his man well and with a delicate flick set up McGeady in space. A couple of games ago the Scottish Irishman might not have been able to put the ball away but he appears to be getting up to speed after his long recovery and smashed the ball across Mark Oxley into the bottom corner.

And that was it. Another coffee in the board room, a chat with Kevin Ball, and Mr Sixsmith seized the opportunity to schmooze with a man who has put himself up to become the next President of Uruguay.

Another three points, and with a game in hand and a better goal difference than the two teams above us as the manager remarked to Sixer, who’ll speak to anyone, “it looks like we’re getting there.”

And now off to Eppleton CW for the U23s – if I can find my thermals.