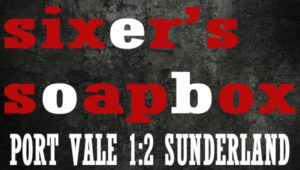 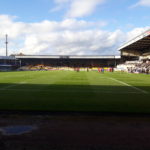 The last time we played (and beat) Port Vale in the FA Cup, we made it all the way to Wembley before losing in the final to Liverpool. That was a comfortable 3-0 win at Roker Park, and goals from Brian Atkinson, Peter Davenport and John Byrne saw us through to Round Four.

Twenty-seven years later, we triumphed over Vale again in a game that was nowhere near as comfortable as that of ’92, although at one stage it looked as if it would be. George Honeyman scored in the 38th second of the game and Lyndon Gooch followed suit 19 minutes later and it looked like a stroll in pleasant sunshine at a tidy Vale Park.

Vale refused to lie down and when Pope soiled our clean sheet with a well taken goal ten minutes before half time, it set up a cracking second half which could have brought an equaliser and also showed that amidst the quality that we undoubtedly have, there is also a grit and a determination not to lose.

It was a grand day out as well. The coach was almost full, there was a replacement courier on board as the regulars were away (he did a decent job but forgot to remind the passengers that hot food was not allowed on board) and we went a different way, traversing the A66 and then down the M6 through the old industrial heartland of Lancashire.

A road traffic incident meant that we had to enter The Potteries via the southerly route and we took in the delights of The Municipal Incinerator Stadium before happening across a couple of the bee hive style chimneys that define this area and are almost as rare as shipyard cranes on Wearside.

Vale Park looked good from the outside – an example of what can be done to an old and tired ground and with a large coach park in front of the away end. There was also a large contingent of Staffordshire Police in the vicinity directing Sunderland supporters clad in regalia to the adjacent social club.

That was not for me and I convinced a young rozzer (they are all young now), that I was a prospective member of the Arnold Bennett Society and that my principal reason for visiting Burslem was to wander around looking for sights that appear in the great man’s novels. Realising that he was dealing with a first class bore, he allowed me to and my carer, Pete Horan, to pass through and we wandered down the road into Bennett’s Bursley.

In Bennett’s lifetime, Burslem was a thriving town with trams and shops and a splendid town hall. Now it is like many English towns, full of charity shops, tattoo parlours and closed pubs and the prosperity has gone, never to return. 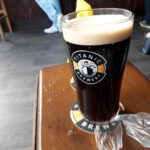 But empty shops can offer an opportunity to entrepreneurs and one such had been converted into a micro pub called Hogs Noggins. The lady on the door realised that we were literary types and encouraged us to enter and we were plunged into an atmosphere of Bennett lovers discussing the merits of the Clayhanger saga and disputing the times of the trams that connected Bursley with Knype . 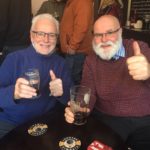 Our rheumy eyes lit up at the sight of Titanic Brewery Plum Porter Special Reserve on the small bar. Pints were ordered and we sat down on a comfortable sofa to indulge in one of the nation’s finest beers. Pete managed a second while I limited myself to another half of this rare treat, although at 6.5%, it was a risky one for such elderly gentlemen.

Pints quaffed, we strolled back to the ground passing bored members of the local constabulary who realised that they could have been at the garden centre or washing the car on a fine Sunday rather than standing on street corners ready to quell any (non-existent) trouble.

There was an impeccably observed silence before the game – I thought of my maternal grandfather, a member of the Cycling Corps, who had been gassed in 1918 – and the game kicked off in front of a decent crowd.

Not all of them were in place when Honeyman finished off a neat move involving Matthews, Sinclair and Maguire by firing a well-placed shot past Brown in the Vale goal. When Lyndon Gooch made it two with an equally well taken goal nineteen minutes later, BT Sport must have feared a mass switch off in the second half.

Whether it was due to our complacency or a tactical switch by Neil Aspin, Vale got back into the game. Tom Vassell departed to be replaced by Manny Oyeleke and, within minutes of entering the game he set up Tom Pope to pull a goal back.

What had looked like an easy win suddenly became difficult and the second half was a cracker. Vale could (probably should) have had a penalty; two text messages suggested that it was a penner but Mr Backhouse thought not. He may just be a tad embarrassed about that decision.

Vale pushed for an equaliser, prompted by a series of the long throws that we associate with the other Potteries team. They were taken by their imposing centre half Leon Legge and aimed at Pope and they caused us more than a few problems. 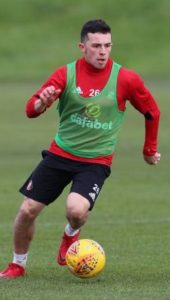 We could have wrapped it up. Honeyman, who had an excellent game, forced a good save out of Brown and both McGeady and Maja had chances to put the game to bed before the end. The arrival of Power and O’Nien restored a greater degree of midfield control and we saw the game out.

There were no weak links in a team that, as usual, worked hard. Flanagan was the outstanding defender and he will be missed next week when we come up against Abedayo Akinfenwa.

In the absence of Cattermole, the centre of midfield looked a little lightweight. McGeouch worked hard and was always there to pick the ball up but we missed someone who would win the ball and move it forward. McGeouch tends to go sideways and bring players in gradually.

Sinclair worked hard up front, played an important part in both goals and he could have scored in the second half but failed to get the ball under control. Maguire was quiet again while McGeady had a tendency to overhit his crosses. But he puts defenders on their toes and is a considerable asset at this level.

The journey home was quiet and peaceful and dark. Road signs flashed past, papers and books were read while the youngsters on the bus slept. We arrived back in Spennymoor twelve hours after we set off, a long day but one which we two old scroats enjoyed thanks to Titanic Plum Porter and a well charted passage into the Second Round of the FA Cup.

Southport away would be nice………

4 thoughts on “Sixer’s Soapbox: Porter at Port Vale and a grand day out”

Next Post
The First Time Ever I Saw Your Ground: Morecambe and The Globe Arena