John McCormick writes……..the last time I wrote about Morecambe was about 18 months ago when I ventured the suggestion that their off-field troubles may have been ending. I think I was right as the intervening months have seen wholesale changes at the club, which are continuing (their chairman has just stepped down). The one exception is their manager, Jim Bentley, who has been in post since 2011 and I think he’s the longest serving manager in the top 4 divisions now that Arsene has gone.

But by the time he took over Pete Sixsmith had already been there: 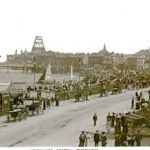 After the industrial delights of Burslem and its surrounding area, off we go to the seaside and a day out in Morecambe, our first ever visit to the town that is beginning to pick itself up after many years of decline.

The railway from Bradford through Keighley, Skipton and Lancaster brought prosperity to the town in the 19th Century. It was a favoured holiday resort for those from West Yorkshire who did not fancy Blackpool or Scarborough, particularly those from Bradford – so much so that Morecambe was known as “Bradford-on-Sea” after the annual departure of passengers from Forster Square station to Morecambe Promenade.

Alan Bennett came here with his parents just after the war and one of his first TV plays Sunset Across the Bay was about an elderly Leeds couple who retired to the town and who did not find retirement a bed of roses, either red or white. 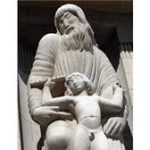 My paternal grandparents also spent time here and aspired to stay at The Midland Hotel, an art deco establishment on the front built by the London Midland Scottish Railway in 1932. It’s a fine example of an art deco hotel, designed by Oliver Hill and with sculptures by Eric Gill, the man responsible for Ariel and Prospero on the exterior of Broadcasting House and who never wore underpants. He was also a man with some unpleasant and illegal sexual habits, so maybe my rather staid grandparents were better off in the small private hotels that abounded along the promenade.

Not so their eldest grandson who, thanks to an unexpected payment from the exam board, is spending Tuesday night at The Midland and who had hoped to visit The Battery pub where he had his first pint of beer in 1966. It was a decent pint of Thwaites, bought by the pater while the mater and the siblings stayed in playing snakes and ladders or some such game. Alas it is derelict.

Since then, success has been surviving in the 92. The town has a population of 35,000 and many of them are either retired, students from nearby Lancaster University or people who have fallen on hard times. Not a great fan base although they do have loyal and consistent support. The average crowd for this season is under 2,000 with Oldham Athletic proving to be the biggest draw so far when 3,050 turned up to watch them in August. 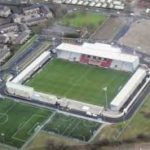 Christie Park is now a Sainsbury’s as the club re-located to The Globe Arena (right) on the edge of the town and a 25-minute walk from the town centre. Opened in 2010 it’s a decent new build with a large main stand (we have seats in it), two covered ends (we have been allocated the smaller of the two) and a narrow open terrace opposite the main stand which replicates the narrow open terrace opposite the main stand at Christie Park which was known as The Carwash Terrace due to Rose Royce spending her formative days in the town. (I made that up but the rapper Busta Rhymes did do some of his growing up in Morecambe).

I visited the ground on the 15th January, 2011 for their Division One clash with Torquay United. We had a blank Saturday as the Wear-Tyne derby was the day after. You may remember that one. We drew 1-1. Kevin Nolan put them ahead and Asamoah Gyan levelled in the last minute.

Our team that day, guided by Steve Bruce was; 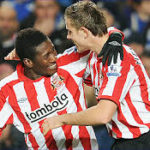 We were sixth in the Premier League, won the next game at Blackpool and then only picked up 10 points from the next 42 available, but we finished tenth, one point and two places above Newcastle, so there was some joy at Sixsmith Towers that summer.

There wasn’t much for the handful of Torquay supporters who had made the 615 miles round trip to West Lancashire. They were elated when Billy Kee put them ahead with 12 minutes to go, crestfallen when Laurence Wilson equalised in the 88th minute and wailed in despair when the same player converted a 92nd minute penalty to wrap the points up for The Shrimps. But it worked out well for both clubs. The home team maintained their place in the league and Torquay still made the play offs, although they lost to Shrewsbury in the semi-final.

I did see a couple of games at Christie Park. One was a pre-season game against Stenhousemuir in 1999, when the Scots invaders went home with the English bonnets to the tune of 4-1 and the other was a game against Darlington in 2007 that lasted 22 minutes before the referee realised that he had made a serious error in starting the game in a monsoon and that he had better abandon it before players and spectators were washed out to sea. 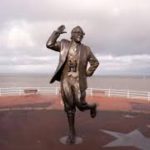 This game is a pleasant distraction for us after the intense league programme and the FA Cup tie at Vale Park. It gives us a chance to visit a town that has seen better days and was once so desperate to attract visitors that it transformed Happy Mount Park into The World of Crinkly Bottom, complete with Mr Blobby and Noel Edmonds. It lasted 13 weeks before it plunged into receivership. It was also the birthplace of one Eric Bartholomew, an aspiring comedian, who took his his stage name from that of his hometown. When he saw that Bartholomew Morecambe would barely fit on the Moss Empire posters he lost the Bartholomew and put Eric in front instead.

MCFC video posted on Youtube by DidzMFC May 2015.  Eric Morecambe photo by Lupin, GNU Free Documentation licence. Original Midland Hotel jpg file believed to be by Rwendland, Creative Commons license. If there is any copyright claim, not answered by ‘fair use’ exemptions, on the video and other images used to illustrate this report, please make us aware and we will add credits or remove as requested.

4 thoughts on “The First Time Ever I Saw Your Ground: Morecambe and The Globe Arena”