Malcolm Dawson writes……as I struggled to sleep in the early hours my thoughts turned to the afternoon’s events and looking for positives, I began to think that perhaps this result was in fact a good thing. Whilst we want to win every game it is unrealistic to expect no slip ups (though Celtic may point to their long unbeaten run) and this game was a bit of a wake up call to any Sunderland supporter who was expecting us to win this league easily. Not though for Jack Ross and the team who constantly remind us how aware they are that this is a tough division and that they will have to be on the top of their game to continue to challenge for top spot.

This was certainly no walk in the park and showed once again that there will be no easy games in this league. How did Pete Sixsmith see it? Read on to find out. 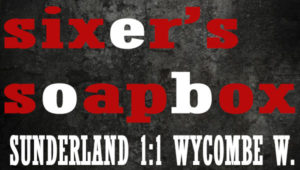 As a Sunderland supporter of (too) many years standing, there is always that nagging feeling that things can and will go wrong. It started in 1963 when a home defeat by Chelsea prevented what should have been an easy promotion and it has continued over the years with a succession of missed promotion targets and slides into relegation places. So far this season, we have looked competent rather than sensational. Wins have been ground out, draws have been hard fought and to only have lost one game at this stage of the season is a great achievement whatever club you are supporting.

For Sunderland supporters, who rarely go into the Christmas period with anything over than gloom and despair, this season is a real change. But, there’s always that nagging feeling that if all the stars are in the wrong position and the gods of football are angry with us for some perceived slight, there could be that feeling of hubris just around the corner.

And so, it (almost) proved to be against Wycombe.

We took a point out of this one and we just about deserved it as we showed resilience when things were not going particularly well.

In other days (and higher divisions) this would have been a home defeat and there would have been grumbles and moans from the crowd, repeated on phone ins and message boards and web sites and the gloom would have pervaded the rest of the week. The new realism that has been evident this season suggests just a mild bout of “We were shite-idness” and a realisation that things do not always work out exactly how you want them.

This was certainly the case here as many saw Wycombe as prospective lambs to the slaughter, a team languishing in the nether regions of the league, with an on-loan keeper making his second debut and their icon, Abedayo Akinfenwaa on the injured list.

Lambs to the slaughter they were not, and after surviving a tricky opening when we could have scored but didn’t they settled down to play some good football. They had a game plan and stuck to it and the longer the first half went on, the higher the anxiety levels went up. Having said that, they never troubled McLaughlin, who could have been sat in a dugout in Tirana watching Steven Fletcher score a goal.

Our other returnee, Tom Flanagan, was busier as Wycombe exerted pressure outside the box, but little inside it.

The stats tell us that we had 61% of the possession. What they don’t say is the amount of that possession that was wasted. Flanagan and Baldwin saw an awful lot of the ball as Wycombe retreated to squeeze out our midfield and forward players. Alas, a lot of that possession was not used wisely as they aimed long balls which were either headed away, cut out, or disappeared into touch.

We missed an outlet at the back, a role that Oviedo fills perfectly. Adam Matthews, the most improved player in the club by an absolute mile, does get forward and Reece James (again excellent defensively) tries to but neither have the absolute quality that comes from the Costa Rican. But hindsight is a great thing and James has done absolutely nothing wrong in his recent run of games.

If the old maxim of “never change a winning team” was going to be followed, we would have seen Jack Cartwright, Jordan Stewart and Jake Hackett lining up, but Jack Ross decided that the team that had won at Port Vale was the one he would entrust with this game. It was seen as a correct decision by the deputy editor and myself as we heard the team whilst sat in the car and we looked forward to seeing Maguire, Gooch and McGeady running at the Wycombe defence and (hopefully) Sinclair add to the solitary goal that appears on his first team stats.

Alas, it was not to be. The three runners all had off days with McGeady being the most effective of the trio. He should have scored just before the break and that would have forced the visitors to change their game plan, but he fluffed a very good opportunity. However,he kept going and lifted our performance levels when we were pushing for the equaliser.

Maguire and Gooch were hardly in the game, with the young American being particularly disappointing. He was tightly marked and when this happens, he tends to need too many touches and this reduces his effectiveness. Sinclair battled away up front but had little support. There is a case for retaining him as he can put pressure on defenders but he needs the midfield players to get up there and support him. This did not happen yesterday and we were far less effective than we have been as a result of this.

The replacements made a difference. Power established the control over midfield that Honeyman and McGeouch had not really had. I like McGeouch. He is a good player, but he needs to be used as a go to player rather than someone who drives you forward. Should Cattermole leave in January, it would be interesting to see the Scotsman and the Scouser linking up together.

The other replacement was Josh Maja, rapidly becoming a goalscoring fixture in the team. He took a good one in the last minute on Tuesday and here, he took another good one with six minutes to go.

Honeyman did well to get to the by-line and did even better to pull the ball back to Maja. He set it up beautifully and there was no doubt where the ball was going and he duly thumped it into the net. We need to enjoy him while he is still with us. A season in the Championship will be the making of this talented young man.

Wycombe, a team of unsung players, did well. They were well organised, with each player knowing what he had to do and then doing it properly. I liked the goal scorer, Fred Ondemyina, who showed some cool touches and who took his goal well and their defence was efficient with the 35-year-old Adam El-Abd standing out.

I also enjoyed the animated responses of manager Gareth Ainsworth who flapped his arms in frustration while patrolling his technical area like a demented vulture. He got his tactics right and there is clearly a strong bond between him and his players. Their fans were good as well and clearly enjoyed their day out. But will they take 700 to their next away game at Gillingham in a month’s time? Answers on a postcard please………

We are still second and looking upwards. The manager looks at games in groups of seven. In the next seven we have Barnsley, Accrington Stanley and Portsmouth, all rivals for one of those two automatic spots. Jack Ross does not need the likes of me to tell him how important this period is. As always, we live in hope.

But, as John Cleese says in Michael Frayn’s wonderfully scripted “Clockwise”, “It’s not the despair, I can stand the despair. It’s the hope I can’t stand.”

We know how he feels.

Next Post
Sixer’s Sevens: Wycombe Wanderers give us a timely reminder