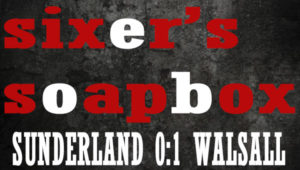 Malcolm Dawson writes……. Pete Sixsmith is usually very busy at this time of year, and although he was at the Stadium of Light last night is otherwise engaged this morning, so once again he has asked me to climb on the soapbox for the Salut! Sunderland take on our FA Cup defeat.

Make no mistake. Walsall deserved to win this game. They were busier, harried and hassled whenever we had the ball and looked dangerous on the break. Technically, I thought we looked to have the more gifted individuals, but Watmore apart, all seemed lacklustre and battle weary. This was certainly not a great display from the home side, though unlike some of the crowd around me, I didn’t feel it merited the four letter synonyms for manure and excrement that they chose to describe our performance.

With four fullbacks unavailable, JR chose to start with O’Nien on the right hand side of a 4-4-2, with the now regular partnership of Baldwin and Flanagan in the centre and Oviedo as an attack minded left back. Power and McGeouch sat just in front of the back four, Maguire nominally wide right and Honeyman buzzing about all over the place and Watmore and Sinclair up front but both playing more towards the flanks than providing any direct threat in more central positions

I am beginning to find Sinclair frustrating. I like his effort and industry but he seems to be having little effect on the play at the moment. I can’t fault his energy or willingness to get involved but he does appear to rely on his right foot. The fact that he often turned up on the left wing last night meant that instead of looking to play an early ball into the danger area, he would look to cut inside first which often resulted in the attack breaking down before there was any real danger of someone threatening Roberts in the Walsall goal.

The other threat down the left came from Oviedo but too often for my liking he appeared to want to beat his man once too often so after showing some fancy footwork to get into a position where a dangerous ball into the box looked on, the opportunity would vanish as the defence got into position and he was closed down.

Maguire’s ball retention wasn’t great. He never stopped trying but he will know this wasn’t one of his better performances. He was guilty on a number of occasions of trying the fancy flick or blind pass and ended up giving the ball away when easier options seemed to be on the cards. It was an ill judged back heel that led to Walsall’s goal. Hemmed in on the right touchline he gave the ball away and although we had plenty of defenders in position, the ball was pushed forward and bobbed about a bit until it was headed back from just outside the penalty area by number 3 Luke Leahy to Josh Ginelly on the left wing and his short side footed pass to Liam Kinsella saw the midfielder drive in a right footed thunderbolt from all of twenty five yards that Bobby Charlton in his heyday would have been proud of and gave McLaughlin no chance.

The goal came early in the second half and we still had plenty of time to get back into the game and whilst it was frustrating and our scoring opportunities were limited, just one goal would have brought extra time and the possibility of a penalty shoot out, so please explain to me the logic of those who started leaving the ground when there was still plenty of time on the clock. Unfortunately last night they didn’t get to miss another hour or so of drama but oh how I wish they had.

Walsall also had the most clear cut chance of the first half, which was entertaining enough without setting the pulses racing, when Osbourne played a short ball to Gordon just inside their own half. He in turn played a lovely forward pass to Ferrier on the left wing who got past Flanagan and squared the ball into the onrushing Gordon, five yards out in front of what looked to be an open goal. Somehow McLaughlin got down and smothered the Walsall man’s side footed effort from point blank range.

We had a few chances of our own. McGeough, Honeyman and Sinclair all combined to set up a position where Power had a clear site of goal but his effort from distance went wide. Watmore who looked delighted to be back and why shouldn’t he after his injury nightmares, was willing to take on defenders and shoot whenever he could but in truth never really looked like scoring in that first half. Like McGeady did, he will need a couple of games to get back to his best but he’s a welcome addition to the squad.

A better opportunity came his way later on and his curling shot would probably have found the far corner or needed a smart save from Roberts, but number 34 Martin was in the right place to head Roadrunner’s right foot effort round the post.

Oviedo had a decent free kick which he fired in towards the far post later on and although it looked as if the Costa Rican was looking to score himself, neither Maguire nor Flanagan was able to get a head on it and it curled around the post with the keeper nowhere.

Maja and Cattermole had replaced Watmore and McGeouch but neither could exert any influence on the game. Mumba came on towards the end and looked lively enough to perhaps justify more game time but overall this was a more lacklustre performance from our boys.

Baldwin and Flanagan defended well enough last night but both were wasteful with the ball at times. I was surprised that Ross didn’t give at least one of them a rest last night. Loovens and Ozturk both looked OK last week and maybe instead of playing O’Nien in an unfamiliar role he could have played a back three with Oviedo and O’Nien or Mumba as wingbacks. Just a thought and perhaps he was taking the opportunity to take a look at a few options in case Matthews, Love, Hume and James are all out of action again.

Positives to take from last night?

Well Bristol Rovers on Saturday is a game we would expect to win but is another of those slippery yellow fruit peelings that can cause someone to go apex over elbow. Let’s hope not.