There are a lot more games in the lower divisions than in the Premier League, and even more with our success so far in the Checkatrade Trophy, keeping Pete Sixsmith busy not only with his unique match reports, but also his reminiscences relating to previous encounters with our forthcoming opponents, so once again Malcolm Dawson has called round to Sixsmith Towers to borrow the soapbox with his view of events from his seat in the West Stand at the Stadium of Light. 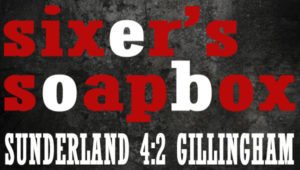 When he arrived we were told that Jack Ross favoured an attacking style of football that would bring us plenty of excitement, a shed load of goals but might mean that at times we could look a bit shaky at the back. That’s certainly what we got in the early days. Good wing play, high pressing of the opposition when not in possession, attacking full backs and plenty of players getting forward and threatening the opponent’s goal.

That’s what we got in the first part of the season. But then for whatever reason, perhaps because of the frustration of our difficulties keeping clean sheets, perhaps because of the personnel that was fit and available, sometime after the defeat at Burton the set up changed, we looked to play a lower risk game, keeping possession whilst defending deeper and waiting for an opportunity to find the net. I’ve been trying to work out which game marked that sea change but it’s not jumping out at me – sometime around the FA Cup loss against Walsall perhaps – but I do recall mentioning a few weeks ago to anyone who’d listen that we seemed to be playing narrower and not getting behind the defence as much. Well that worked to an extent, because we still scored in every game, didn’t concede on several occasions and only lost once – away to (at the time) high flying Portsmouth.

However, in a way three successive home games against sides who we were expecting to beat has proved to be a two edged sword. Had we picked up maximum points all would be hunky dory but we have become the banker team for anyone who still does the pools and two points out of six against Blackpool and Accrington Stanley was frustrating.

But my feelings in those games (unlike some others) were echoed to an extent by Jack Ross in that I felt we looked more like the early season Sunderland, had got to the by line more, played good balls into the danger areas more frequently and created more opportunities to score than in the past couple of months. I also thought the team were still showing tenacity and fight in being able to come from behind in both games to avoid defeat. Yes it was frustrating and yes there are those supporters who feel we should be walking away with this league and for whom those results were unacceptable, but over the past few seasons I have got used to watching Sunderland sides who, on going a goal behind, capitulated far too easily. At least with this group of players I never see heads drop, nor ever feel we are completely out of the game.

That said, with this group of players I am never comfortable either until we are three or four goals ahead as we are always likely to concede possession and gift the opposition a goal or two. This is what we got last night.

Our corner kicks have improved with Leadbitter’s return and we actually score from them on occasions now. It’s a few years since I remember feeling that a corner gives us a chance to score and after only 4 minutes, with the big men up from the back I was hopeful we’d get the early goal to settle the nerves. Leadbitter swung the corner in, Dunne and Flanagan were both manhandled to the ground and while we all screamed for a penalty, the returning Lee Cattermole came in from the back to stick the ball away. Who needs a penalty eh? (Watch this space).

Yesterday morning I got a text from the GP’s surgery saying my blood pressure checks were overdue. They must have realised that it was match day and if it’s ever going to be too high that would be a good time to check as only a minute after taking the lead the game was back level. The Gills attacked down the right before trying to a play a low ball into the box. Flanagan didn’t deal with it too well, it broke for the pony-tailed man mountain who is Tom Eaves as Luke O’Nien was static and calling for offside. Eaves managed to nudge it away from the diving McLaughlin and stick it away before the despairing Tom Flanagan could do anything about it.

After a couple of poor performances, Jack Baldwin wasn’t even on the bench with Alim Ozturk named as defensive cover. Perhaps Baldwin needs a rest, physically and mentally, perhaps Ross decided that with such a big centre forward as Eaves up against us we needed more height at the back, but big centre halves can also be useful up the other end and it was Tom Flanagan who got the second, again from a Leadbitter corner, this time from the opposite side, and restored the lead with a powerful header into the roof of the net. Only ten minutes gone and three goals, two to players who had been brought back into the starting line up.

The third was Chris Maguire and he had come close to scoring just before Flanagan did so I was hoping he would complete the sequence, but unfortunately he got injured when attempting to win the ball back and was obviously hurt. He received treatment, tried to return but within seconds was back on the ground beating the turf in frustration, knowing he couldn’t run it off. Gooch was his replacement.

Though we were the better side, one goal is never enough and we all know there will be periods when we give the ball away too easily and that there will be opportunities for our opponents to find the net. On 40 minutes, a corner from the Gill’s left wasn’t dealt with. It wasn’t easy to follow the play from the opposite end of the ground but the ball bobbled around the box and eventually fell to the feet of Brandon Hanlon who equalised again in front of the 350 or so visiting supporters who looked lost and alone in the top corner of the North Stand Upper.

It’s a long way from Kent to Sunderland for a Tuesday night game but I suppose the fact that we couldn’t get enough tickets for the reverse fixture and packed out the away end is one of the reasons some fans feel we are too big for this division. But the reality is we are here because of past results and we all knew a third successive home draw would not be good enough to get us back challenging for an automatic promotion spot.

But the crowd and the Roker End in particular didn’t communicate this frustration last night and stayed behind the team. McGeady and Gooch both nearly put us in front again before the half time whistle but two all it was at the interval.

The half time entertainment now seems to consist of two ill matched people of various ages, running round the pitch before trying to score into an empty net at the north end of the ground. Last night pitched a Gills’ fan who was given a head start against a fund raising Mackem who had run a series of long distances in successive days. It’s not the most exciting of half time occasions but was of enough interest to stop the Gills’ sub keeper from doing his warm up. It would be the only other goal that someone in a Gillingham shirt would score.

We however, would get two more. Both from penalties and both the result of fouls on Luke O’Nien. The first was a push from the magnificently named Leonardo Da Silva Lopes after a Reece James’s cross evaded all the bodies in the box. O’Nien was charging in at the back post but for once the ref spotted the foul and awarded the spot kick. Immediately Will Grigg ran over and picked up the ball. Aiden McGeady is the appointed penalty taker but apparently was confident enough to allow Grigg to stick it away and hopefully ignite his Sunderland goal scoring career. I’ve seen penalties that are more difficult for keepers to save than this one, but the giant of a man who is Tomás Hóly went the wrong way and we were back in front.

So What? you may ask, but it was Charles-Cook who grabbed O’Nien’s ankle as he dribbled into the box to leave the visitors feeling A Kind of Blue when Aiden McGeady tucked away the second penalty in a similar fashion to Grigg’s. Mind you a finicky ref would have ordered it to be retaken as Cattermole was at least six yards inside the box when McGeady struck the ball. But he didn’t.

Honeyman could have made it five after good work from Aiden McGeady but sent it over the bar, rather than into the net. This was a more encouraging display and more like the early season Sunderland, although by no means perfect. We still have the propensity to give the ball away needlessly, the defence still looks shaky at times but that is the result of a more attacking mindset and personally I’ll be happy if we concede two every game as long as we score more than two.

Portsmouth and Barnsley both dropped points yesterday. Bristol Rovers on Saturday won’t be a push over – no games in this league are – and with us now in third place, four points behind Barnsley with a game in hand and the Tykes playing Portsmouth at the weekend the game at Oakwell in a few weeks could take on increasing importance.

Next Post
Sixer’s Sevens: Gillingham shown what for as Will Grigg steps up