Malcolm Dawson writes……..in yesterday’s programme notes Charlie Methven spoke about the need for all those involved with Sunderland AFC to be seen to be doing their part, if success is to be achieved this season. While he talked about the manager, the coaching staff, the players, the board and the administrators it was really a plea to the fan base to put all the negativity to one side and get behind the team. I sympathise with him and agree to a large extent.

When I was working I found that very few people improved their performance when subjected to constant criticism. By far a better tactic in the majority of cases was to highlight the things that were going well before suggesting ways in which they could be improved and like Charlie Methven I am convinced that frustration and an overt show of disapproval from the stands transmits itself to the pitch, making it more likely that things will get worse rather than improve, but that a positive show of support, even when things aren’t going well, can help spur the team on.

But sometimes it is very difficult to highlight the positives and yesterday was one of those days. The crowd was quiet without being overtly negative and the team’s performance was decidedly lacklustre.

Yet we are still on course for success. It is usually said that winning your home games and avoiding defeat when playing away will almost certainly ensure one of the top spots in any league and while we are not doing that to the letter, we are averaging two points a game and should we maintain that with the games in hand we would be in second spot. It is also frequently said that good teams know how to win ugly and we certainly did that yesterday.

Were there any positives, apart from the result yesterday?

Sterling I thought looked like he could be useful. He’s not a lone striker or target man but he is quick and enthusiastic as is Luke O’Nien. Liam Morgan too looks as if he will be able to give us a bit of width. He wasn’t due to start yesterday but in between my getting out of the car and getting to the ground Lynden Gooch’s partner apparently went into labour and so the new loan signing was thrust into the starting line up. He looks OK.

Had the season so far been back to front I suspect most of us would be more than happy, but in truth, despite the fact we are still picking up results we don’t look as assured or as positive as we were were earlier in the campaign. Does Pete Sixsmith agree. Let him enlighten you. 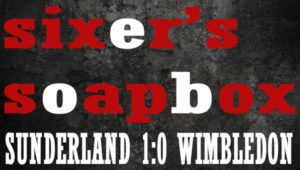 Four weeks ago, I commandeered my good friend Peter Horan to take me to James Cook Hospital at Middlesbrough in order for an “emergency procedure” to be carried out on a particularly sensitive part of the male anatomy.

The evening ended with your correspondent being taken down to theatre, where a very capable young Scottish surgeon gave me a local anaesthetic and performed a “dorsal slit” on the appendage that was giving me some serious grief as a result of a rogue catheter that was literally “taking the p*** “out of me.

Most males of my age have relatively low thresholds to pain (although not as low as that of Kwesi Appiah, the AFC Wimbledon No.9 who squealed and writhed at every opportunity) and in those dark hours before falling asleep, I can still vividly remember the sound of the surgical instrument grinding away and the sounds of yours truly grunting and groaning for the best part of half an hour. Where was Florence Nightingale when I needed her?

Watching this game was somewhat akin to that.

Like the rush to hospital I went in anticipation of it being over quickly, hoping for an early feeling of relief and pleasure but instead having to settle for a gruelling 75 minutes, where the dorsal slit was almost preferable to seeing poor Charlie Wyke struggle to make any impact on yet another game. At the end of the day we came away with the three points, something that Portsmouth, Charlton Athletic and Peterborough United didn’t. We crept closer to an ailing Pompey and remain in very close touch with Luton Town and Barnsley.

We did this because of the anticipation of John McLaughlin, the control of Grant Leadbitter, the promise of Lewis Morgan, the belated arrival of Luke O’Nien and the one moment of true quality in the game from Aiden McGeady when he finally got a shot lined up and despatched it into the net.

The bottom team in Division One can feel a little aggrieved at losing although any chances they had usually came from errors that our players made. They worked hard, showed some good touches and in their captain Deji Oshilaja, had the most composed player on the pitch. If they go down, he will be on the list of a good many Championship clubs. He was certainly far too good for Charlie Wyke, who had a real stinker and who is beginning to look like another Tom Ritchie, Danny Graham or Jozy Altidore, names that must send a shiver down the spine of Ken Knighton, Martin O’Neill and whichever half-wit suggested that we sign Jozy.

I thought that Wyke would flourish at Sunderland. He was back in his native North East, had signed for a club far bigger than any he had played for before and he brought with him a good reputation for scoring goals at this level. He is a big man so he would not get bullied and he would lead the line well, bringing on Josh Maja and whichever other forwards played alongside him. Unfortunately, he was injured before he signed for us, appeared to be regaining his fitness after scoring on his debut and then got injured again at Burton Albion, an injury which put him out for weeks.

I had faith in him. “Wait until he gets back,” I told all and sundry. “He will butcher some of these defences and we will be scoring goals for fun.” Alas, at the time of writing, my faith has been misplaced. His contribution has been negligible and the crowd are beginning to turn against him. That awful header against Luton Town sticks in many memories and today, the post-match analysis in the Gents was not kind to him.

The whole performance was a stumbling one after the initial twenty minutes. In that opening period, we attacked with some gusto, George Honeyman looked bright and Grant Leadbitter made it perfectly clear that he was going to be in charge of the central midfield. His presence allowed Max Power to get forward and we saw some of those great runs into the box that thrilled us in the early days of the season.

But it faded. We allowed the visitors to come back at us and they could have scored at least once. An audacious 40-yard lob from Wordsworth (no daffodil watching aesthete, he) and a shot and header from Nightingale that both flew over the bar. Florence could have put the shot in, I think.

Our attempts on goal in the first half were a big fat zero and the AFC keeper had not muddied his knees or even exerted himself as he went off for his half time orange. Despite the majority of possession, we looked toothless and lacking in imagination, At the back, Jimmy Dunne had struggled while Adam Matthews looked more like the Adam Matthews of the previous seasons rather than the much improved one we have seen this year.

The second half wasn’t a whole lot better.

Wyke departed on the hour to be replaced by Tottenham loanee Kazaiah Sterling. He looked busy and could be an asset as we get into the business end of the season. He appears (note that word) to have more composure and awareness than Jerome Sinclair and looks a useful man to have on the bench. Also off the bench was Luke O’Nien, who replaced George Honeyman and received a rousing welcome from the quiet and rather bored crowd. He is becoming a very popular figure and I imagine that 30,000 people were a little mystified that he was not in the starting XI. He brings energy to the midfield in that he looks for the ball, gets forward and can tackle cleanly and effectively. As a reluctant full back, he did well but it’s in midfield where he shows his abilities off best. Our performance perked up when he vacated the bench and within four minutes of his arrival, McGeady won the game for us.

I sat back and waited for the second goal to come but it didn’t and there was the usual last ten minutes when the eager but limited visitors pinned us back as we invited them to score by returning the ball to them with monotonous regularity. Many of us foresaw another Scunthorpe.

Better teams with more punch up front would have taken a point from us and Scott Wagstaff, a real hero the week before with his two excellent goals against West Ham United, should have claimed it but his tame shot was well saved by the ever-reliable John McLaughlin.

Referee Ben Toner (decent) blew his whistle to muted cheers from our support and loud ones from the noisy away following who clearly enjoyed their day on Wearside. We had the lot from them; “Is this a library,” “Your ground’s too big for you,” “Your support is f****** shit,” and some good ones about their return to their spiritual home at Plough Lane. They are a club I admire and I would love to see them survive but I fear not.

The other results were OK. Portsmouth look as if they are seriously wobbling, Charlton Athletic lost ground again and I bet (geddit) that Barry Fry is cursing his suspension as Peterborough United crashed at home to Plymouth Argyle. But the Luton Town bandwagon rolls on and Barnsley continue to win far more comfortably than we do. That game at Oakwell in a few weeks’ time is looming and could be a season defining clash.

The squad that we have is a big one and could be described as top heavy. Players not involved yesterday (Oviedo, Ozturk, Cattermole, Mumba, Kimpioka, Grigg) would probably get into most teams in this league. The manager has a plethora of players to choose from and he and his coaching staff have to make some big decisions before we head for the dreaming spires of Oxford next week.

No doubt the redoubtable Brian will have something to say about that…….

Next Post
A belated welcome to Will Grigg from Salut! Sunderland – and Christopher Murphy