A WEMBLEY A DAY

If you were born on May 6 1973 or on any day since then, you will have never experienced the thrill of being on this planet on the day a Sunderland team brought home a trophy from Wembley Stadium, writes Malcolm Dawson, Salut! Sunderland‘s deputy editor.

All of your regular contributors to this website remember our last successful visit to the National Stadium and will be hoping for a second on Sunday but not all were lucky enough to get a ticket to see the underdogs in red and white defeat the might that was Don Revie’s Leeds United. Pete Sixsmith was.

The Checkatrade Trophy may not be the FA Cup, but 80,000 fans of Sunderland and Portsmouth will make this a special occasion. This competition might not provoke much excitement in the early rounds, but the demand for tickets from both the south and north east coasts shows that a visit to Wembley and the chance of silverware is still a big draw and a day to look forward to.

Pete will of course be there and each day in the run up to the final, will recall one of his previous visits to Wembley. In today’s offering, he thinks back to what has so far been the greatest day in the life of any Sunderland supporter between the ages of 46 and 82.

We move forward 11 years for my second and most satisfactory visit to a Wembley stadium that now had a roof over all the spectator areas. The 11-year-old schoolboy in short trousers, who had first visited what was then the Empire Stadium with his Uncle Ken in 1962, was now a considerably larger 22-year-old on the other side of the teacher’s desk and was first and foremost a Sunderland supporter of 10 years’ vintage.

I had abandoned my attempts to win over the County Durham natives to the pleasures of rugby league and in order to fit in, had taken an interest in football. I had started by going to Shildon games, had graduated to regular visits to Darlington’s charming old ground at Feethams and, because of a burgeoning friendship with Monsieur Salut, who back then was a mere garçon, had taken an even greater interest in Sunderland AFC.

By the mid 60s I was hooked and began travelling regularly to away games. I did my teacher training in Sunderland in order to watch them and suffered the second relegation in the club’s history in 1970 while still a student.

In 1973 I was almost a fully-fledged teacher.

I did my probationary year at Broom Cottages Secondary Modern School where a cursory meeting with the then Director of Education, George Metcalfe, saw me fully qualify and I learnt the art of teaching from colleagues like Brian Watts, Peter Scott, Dennis Walker and Ronnie Stewart, with help from students like Stephen “Gus” Hopper, Kel Garbutt, Robert Todd, Billy Robson, Julie Wright and many others.

It was a tough year not helped by the team’s form in the first five months which was less than inspiring. Exit Alan Brown, enter Bob Stokoe and the shackles fell off. The turning point came in a largely ignored Third Round replay against Notts County. Over 30,000 turned up that night and we went on to put out Reading, Manchester City, Luton Town and Arsenal – but then you knew that.

There is little to be gained from going through the whole day, so here are some memories that have remained with me for 46 years;

*the scenes on the platform at Sunderland station as trains pulled in and people piled on. Nowadays, Health and Safety would have a dicky fit if they saw scenes like that.

*the man who crawled into the luggage rack and slept there all night. Never tried it, don’t think I will.

*hordes of bleary eyed Sunderland and fewer Leeds United fans stumbling around the streets of London (with apologies to Ralph McTell).

*a torrential downpour before the game started soaking all and sundry.

*the save – the header by Trevor Cherry which produced a fine save from Monty. The ball falling to Peter Lorimer. The 40,000 red and whites convinced for a split second that it was going in for the equaliser. Monty’s reactions pushing it on to the bar. A very sharp intake of breath then pandemonium and bouncing on the terraces.

*ordering “three pints of elementary” in the Sherlock Holmes pub and being sneered at by the barman. 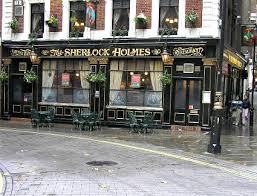 *spending the entire summer walking round with a huge smile on my face.

We neglected to visit Downing Street that day and anyway, Ted Heath, the incumbent Prime Minister, would probably be down at Broadstairs on Morning Cloud while contemplating taking on the NUM. Instead, we availed ourselves of liquid refreshment at 20p a pint (15p at home) which sounds good but my monthly take home pay was £72 or approximately £18 a week. The beer, which was probably brewed by Courage or Whitbreads or Ind Coope or Charringtons, was weak and watery and looked like cold tea. We thirsted for a pint of Samson as dispensed from the barrel in the Albion in Vine Place. 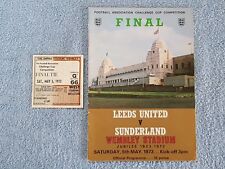 The programme cost 15p, the match ticket £1.00 and the train fare £3.50 return on carriages that had last been used when troops arrived back from Dunkirk. No doubt we sang the current hit single Tie A Yellow Ribbon Round The Old Oak Tree by Tony Orlando and Dawn and we probably substituted the words “Tie A Red and White Ribbon Around the FA Cup” for the title riff.

Those at home could watch the game on two of the three channels we had then. David Coleman commentated for the BBC with Brian Moore the voice of ITV coverage. Both stations had a long, long build up to the game, with the BBC offering It’s A Cup Final Knockout with Stuart Hall and Eddie Waring (link with 1962 there) and ITV giving us wrestling from Brent Town Hall featuring Mick McManus and Jackie “Mr TV” Pallo plus Giant Haystacks v Big Daddy, all supervised by that old smoothie, Kent Walton.

Later on, for those at home who were not out celebrating, they could watch a show featuring Jimmy Saville and then a Dick Emery special in which he “took off” Cyril Smith. Hall, Saville and Smith all in the same night. Interesting. (And possibly you might have heard Tie Me Kangaroo Down Sport on Ed Stewart’s Junior Choice before turning on the telly! Ed)

The finest programme of the evening was tucked away at 11.30 when the BBC showed the umpteenth rerun of Sergeant Bilko, still one of the finest comedy shows of all time with characters like Corporals Barbella and Henshaw, Private Duane Doberman, Colonel Hall and Sergeant Rupert Ritzik. Had we possessed a VCR recorder (VHS or Betamax) I would have demanded that my mother tape it. But we didn’t.

9 thoughts on “A Wembley a Day: the one where the Wearsiders vanquished the mighty Leeds”

Next Post
A Wembley a Day: long before Portsmouth came Huddersfield and Wakefield Trinity