Well, Coventry did come out of February well and they also did us a favour, with a draw against Luton, but our own inability to convert draws into wins meant we didn’t fully capitalise on their efforts. Since then Coventry have beaten Peterborough and climbed above them into 7th place. Their keyboard warriors must be sweating as they pore over their computers looking at the table and working out the possibilities, but with more winnable games just around the corner they are certainly in with a chance of the playoffs. Well done them.

Here are the points aggregated by the selected clubs: 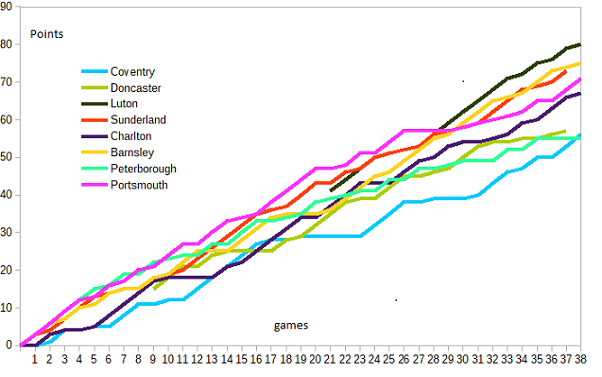 You can see how Coventry’s recent good run (they are second in (footystat’s form table) has closed the gap to the top. In contrast, Peterborough have been in decline for some time. Portsmouth, too, dipped although they have now staged something of a recovery, and Charlton have also had an iffy patch though their recent form is as good as anyone’s.

These teams show how necessary consistency is if a club is to get out of the division, so the question arises

“Can any of these four keep it up enough to ward off Doncaster, whose recent form has not been too good – tough games notwithstanding – or to challenge the top three?” 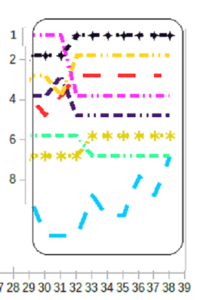 … since when excellent form by  Luton combined with slippage from Portsmouth and a concerted effort from Barnsley (very erratic ealier, now drawing a lot), plus Sunderland’s unravelling of some of their games in hand, began to produce more stability at the very top, as you can see from the enlargement on the right:

However, the playoff mini-league below these remains unsettled, with Blackpool and even Fleetwood (neither are shown) still able to mount a challenge. Have another look at the main graph and decide who of Doncaster and Coventry are most likely to grab sixth spot – or even better – and don’t forget there are a number of six-pointers coming up. More of this below.

That doesn’t mean Sunderland, Portsmouth and Charlton are guaranteed playoff places or better but goal differences, current form and, most importantly, points to date are all pointing that way. Only two points separate 6th and 8th but there’s a 10 point gap between 5th and 6th. That will take some closing.

There is also the matter of games in hand, with both top and bottom of the playoff zone being affected though it’s not as acute as it was as only Sunderland and Doncaster are playing catch up. 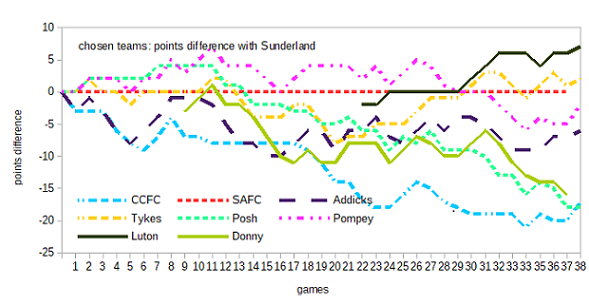 In this graph I’ve set Sunderland as the baseline because Coventry – the intial choice – are too far out of the top three to be a factor right now. You can see that Sunderland and Doncaster’s lines finish early because of their games in hand but it still gives a decent illustration of the gap between Luton and the rest, and it shows quite well that Sunderland have managed to close the gap on Barnsley. It also shows that Coventry, for all their recent fight, haven’t. They have gone past Posh to within spitting distance of Doncaster, and my “in with a chance” can’t be denied by anyone, but it’s surely only a chance of the top six. And will it remain on the final day of the season? That could result in a crucial game. 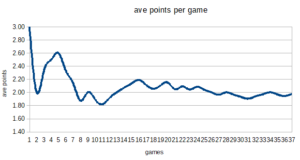 Returning to the  2nd-3rd fight, Barnsley are doing slightly better than Sunderland (shown right) when it comes to points per game. The difference is marginal and while recent draws mean neither have managed to get back to the 2.00pts so beloved of Jack Ross they would both rise above it if they won their next match. Games in hand have to be won so the advantage must lie with Barnsley but I’m hoping Coventry’s good form continues through March. It’s that close.

So it’s looking like it will be an interesting run-in. Are Luton home and dry? There are those who think so. Will Sunderland be boosted by a break or hammered by a clogged-up April? So many questions, so few answers.

And there are those head-to-heads. The double pointers that could make or break a season. They start tomorrow when Luton host Doncaster but they go on until the very last day of the season, with peak time around the middle of April.

Have a look at the table below and see if you can work out the final top ten, never mind the final two and six:

And then think about the games I haven’t included.

Not double pointers, maybe, but don’t tell me any game’s easy in League One. This weekend sees a lot of games between clubs in or near the bottom four and clubs at the other end of the table and I don’t think they will all be going to form.  I see shocks ahead.

I’ll try to get back  in a few days and see if I’m right.

Until then, keep the faith.

Barnsley lurk behind Peterborough, Portsmouth and Sunderland, while Charlton and Coventry stutter.

Portsmouth, Luton, Barnsley and Sunderland, plus Charlton – the League One breakaway group?

MCCORMICK’S DODGY NUMBERS: THE ARITHMETIC’S CORRECT, IT’S JUST THE REST COULD BE A BIT WONKY. ACKNOWLEDGEMENT: ORIGINAL CARTOON COURTESY OF WPCLIPART, GRAPHICS BY JAKE, graphs by me

4 thoughts on “Coventry hanging on to Doncaster and Charlton as Portsmouth chase Barnsley, Sunderland and Luton.”

Next Post
Another one from the archives: Ken Gambles and some childhood heroes