Part one of  our mid-season review looked forward to the Christmas games.

Part three was meant to go out after the Luton game. Repetitive strain injury decided otherwise and I still have to take care so here’s what I’ve managed, with a focus on a couple of comments I made towards the end of that second part:

It provides an alternative way of comparing the clubs on our original watch list* (Portsmouth, Peterborough, Charlton, Barnsley and Coventry**). I’ve set Sunderland’s points as the baseline and am showing the other clubs in relation to them. When Doncaster were doing well, some while ago now,  they were added to the chart and some eight games ago, when it became obvious Luton weren’t going away, I added them as well. You’ll find Luton in the circled area to the top right of the chart. 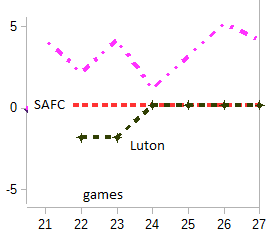 a gap appears to seperate the top five from Peterborough and Donny, which means not only that Barnsley did catch up but that Charlton also did enough to stay with the breakaway group. However, Portsmouth, Luton and Doncaster each have a game in hand over Charlton while Barnsley and Sunderland have two. Remember Charlton’s points per game ratio of 1.83? That’s quite a bit below the top four, making it a tough call as to whether the breakaway really does comprise five clubs rather than four.

That said, it’s really too early to write Charlton off for even one of the top two slots and their result at Peterborough this afternoon will be one to look for. Win and they are truly with us. Lose and Posh could also claim membership of that breakaway group. Doncaster aren’t playing and would finish the day on the wrong side of a four point gap. Would that be too much?

Peterborough – Charlton isn’t the only interesting game coming up. Tuesday 29th sees Luton take on Portsmouth and Barnsley travelling to resurgent Oxford United (perhaps I’m hoping too hard). Then, as Sunderland entertain Wimbledon, Portsmouth entertain Doncaster. The table could look different when those results (and don’t forget there are other games involving top clubs) come in.

It’s not only results that are interesting. Luton have lost a manager while gaining a decent player from Barnsley and Sunderland’s top scorer has done a bunk. How much will that shake things up? Luton’s good run has continued since Nathan Jones left but will it continue? Josh Maja’s departure is problematic, given Sunderland’s inability to close out games, but will a replacement bring new life to the front line?

My overall feeling is that February will see the breakaway group I identified consolidate. There are some double headers (Portsmouth – Barnsley on 23rd Feb looks tasty) but not as many as the past month has seen and most of the top clubs should pick up points. Feel free to differ

I might come back in early March and have another look at what’s happening but before I go I must revisit Coventry City**. Currently 10th after a poor January, and with a negative GD and no games in hand, their fans must be disappointed after an earlier decent run raised hopes. On the other hand, they are a full nine points and ten places above the bottom three. Would they have accepted that at the start of the season? I think so. Perhaps they’ll let us know; it’s time we heard from them. I do think, however, that if things continue as they are I’ll have to remove Coventry City from my charts to make them clearer.

5 thoughts on “Portsmouth, Luton, Barnsley and Sunderland, plus Charlton – the League One breakaway group?”

Next Post
Rate the Ref: And the worst by far is….