MONSIEUR SALUT writes: the series has been an interesting exercise but will now be discontinued for the reasons set out below. Our thanks to Ken Gambles for the idea and Salut! Sunderland’s associate editor John McCormick for making it work

John McCormick writes: I have to include a warning right from the outset. Some of the judgements below are dodgier than even the dodgiest of McCormick’s dodgy numbers. The arithmetic’s correct, as always, and I removed the Accrington ratings because of the abandonment, but some games – away games especially – had low numbers of responses and that brings into question the reliability of our findings. For example, removing the one person who gave Craig Hicks (Scunthorpe Utd away) a Coote-like 1 would have increased the rating for that particular ref from 6.14 to 6.54.

A couple of refs got responses into the low hundreds, which you might think would improve reliability.

Well, it might. But this is football, and we are biased. So you might guess what happens when the referee in the most critical game of the ten we have rated, and a home game with a large crowd at that, decides to make one or two strange decisions such as awarding a penalty and a red card against us. We get the largest turnout of the series and the lowest rating by far, although Mr Coote himself may have done worse had he actually been given a rating rather than the place of honour in the scale Ken Gambles devised for us and which I have faithfully reproduced below:

Here are the results in full: 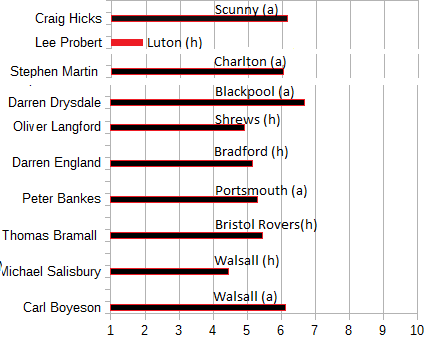 Take a bow, Mr. Probert, but please don’t take any more of our games.