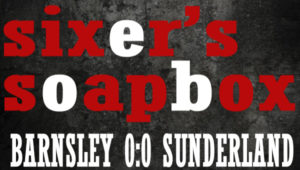 John McCormick writes: Games like this have to be taken in context. Lose and we can forget about automatic promotion. Win and we’re back in control of our own destiny. But draw? It means we’re still reliant on other teams dropping points (while Luton widen the gap) but it doesn’t mean we’re out of the race.
So what did Pete Sixsmith think of it after a little reflection?  (And by the way, it’s he, not me, who is adding the editorials)

On the surface, a goalless draw at the team above you looks like a positive result. Indeed, there were positives to be taken from this, but, on the two-hour journey home, the more I thought about it, the more I thought that this was a good opportunity lost.

Lost, not wasted. We still have a chance of passing Barnsley. Luton Town can order the champagne because I think that they are just disappearing over the horizon, but the other automatic place is between ourselves. The Tykes and Pompey.

What we got on Tuesday was a good game between two good sides who both played good football and which was officiated by a good referee. (Memo from ed; buy the old fool a new Thesaurus).

An excellent crowd in excess of 18,000 just about filled Oakwell for this one. The thirteen and a half thousand who went back to Cudworth (pronounced Cuddeth), Dodworth (pronounced Doddeth) and Worsborough Bridge (pronounced exactly as it says on the tin) would be the more disappointed at not winning, but probably more pleased with the point, while those returning to Shildon, Spennymoor and South Hetton would be pleased not to lose but slightly disappointed with the single point.

On the balance of play, Barnsley were the slightly better side. They play with energy and gusto under their German head coach, Daniel Stendel, playing a very tight but also fluid 4-2-4. The two wingers, Green and Thiam were a constant presence and Thiam came close to scoring on a couple of occasions in the first half. Like the teams built by his fellow Germans at Liverpool and Norwich, Stendel’s team plays with enormous energy and we had to be on our toes to combat it. At times it was all hands to the pumps, but the recalled Jack Baldwin held the back four together and Lee Cattermole never stopped in midfield. Both made goal saving tackles; Baldwin when he dispossessed Woodrow when he was about to shoot and Cattermole on the same player after he had been dispossessed by a gang of three Tykes. 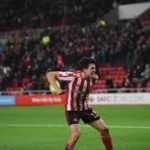 Other players found the intensity of the game difficult. Luke O’Nien (left) had his least effective game at full back and it may be time to restore Denver Hume to the team and push O’Nien into midfield. Lynden Gooch continues to need an extra touch when he is moving in on goal and was unable to pick his way through the huddle of Barnsley players who surrounded him. Will Grigg got no service at all and there is a tendency to bang the ball up to him, where tall, muscular central defenders like Ethan Pinnock will dominate him. He needs the ball on the floor and he needs support from midfield.

He got the latter from Max Power, in for suspended George Honeyman. The former Wigan man had our two best chances, one in each half. The first was well saved by Adam Davies, the second rolled agonisingly wide. Power is charged up now to play an important part in the final run in and to help guide us ohm. ( No more electrical puns; they were shocking; Ed)

The game was the complete antithesis of the sordid affair at Adams Park. Tackles were hard but fair, time wasting was non-existent – 1 minute added time in the first half, 2 in the second – and the medical teams remained in their seats for the entire game. The referee, Peter Bankes, was as good as Lee Swarbey had been awful, keeping up with play and getting all the important decisions correct. I would be pleased to see him again; he had an aura about him and spoke to players properly.

The weather played a part in the game in that it was windy although there was a minimum amount of rain. After last week that was something to be grateful for, but both keepers found kicking into the wind difficult and corners taken at our end had a tendency to fly across the goal and out for a goal kick, landing somewhere near the opposite corner flag.

Perhaps we could be criticised for being too cautious but seeing as we are currently without Chris Maguire and Duncan Watmore, that our leading scorer has departed for La Gironde and our big (for us) summer signing has been poor, we are not overburdened with attackers. Kazaiah Sterling made the briefest of appearances and it does suggest that he is in the manager’s mind for future games.

The news that Watmore is out for the rest of the campaign is extremely annoying That spiteful challenge from Bean on Saturday was seen as being worthy of a second yellow card by Lee Swarbey, meaning that Bean will serve a one match suspension. Not fair. In a perfect world, the FA would review that and slap a long ban of 8 or 10 games on him. In Rugby League, a player deliberately trying to injure another would receive a long ban; in Australia, they would probably feed him to the wombats. Thuggish behaviour by players is as unacceptable as that by those who think that they can enter the playing area and assault those on it.

Both Marcus Bean and the Birmingham City fan who attacked Jack Grealish issued apologies which may well have had a trace of sincerity but smacked of self-preservation. The game is under some pressure at the moment and the likes of Lee Swarbey and Marcus Bean are doing nothing to relieve it. 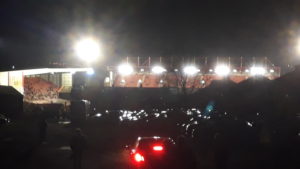 Barnsley is a good venue for a midweek away game.

It’s not far, the floodlights shine out from a distance and the town centre with its revamped indoor market is a fifteen minute walk away. 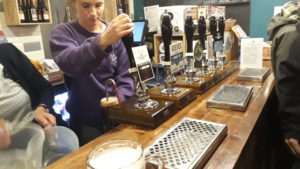 Pre match refreshments were taken in The Arcade micro pub alongside Steve Norris, a former Ferryhill lad and landlord of The Carriages in Lytham, a fine pub which includes Ross Wallace, Gavin McCann and, er, Joey Barton amongst its regulars.

Walsall are here on Saturday so let’s hope that we can send them home so sore that they won’t want to sit in their saddles.

Next Post
Sixer’s Barnsley Sevens: a good Sunderland point on a bad night.