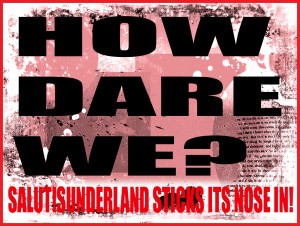 Monsieur Salut writes: he calls himself Matty at Twitter but I will not embed the tweet, purporting to show a full name, because a) it may not be his for all I know and b) I have no wish to spread his word, other than to challenge it …

Maybe I missed an element of self-defence in the untold story when “Matty” tweeted this: “To the Sunderland fan that chinned a Pompey fan sat in the home end. Hats off to you sir.”

Was the “chinned” Portsmouth fan doing more than we, as Sunderland supporters, do often enough when he sat in a home area? Had he put women and children at risk with some vile, aggressive behaviour or even brought into the Stadium of Light one of those flares that certain visitors – minority pondlife among Pompey and Coventry support being guilty as charged – like to throw towards people beneath them in the North Stand?

There certainly wasn’t anything in the tweet to suggest it. Just the implication that being an away fan in a home section was sufficient reason for one human being – if that is not being excessively generous – to assault another. It is depressing enough on any level; oddly enough, I would expect anyone capable of writing “Hats of to you sir” to possess a degree of wit and that depresses me further.

And most disturbing of all, worse than our Matty’s possibly kneejerk approval of an act of simple thuggishness – unless he can now offer evidence or at least testimony of actual provocation – is that at the last count, 1,335 people (presumably SAFC fans) have actually “liked” his tweet.

This is not the best forum for trying to reason with them. Almost certainly, no one who thinks it is a good idea to act like a mindless yob would bother to come to Salut! Sunderland. If they did, they’d soon be put off by the grown-up writing and joined-up thinking evident in our posts and a vast majority of readers’ responses.

But as someone who has never wanted to “chin” another person at a football match, however angry I have become with events on the field or around me, I feel entitled to show renewed solidarity with football’s slow but obvious advance from its neanderthal age.

And I claim the right to believe that in order to ensure our game does not degenerate once more into ugly hooliganism, someone who does make an unprovoked attack of the sort Matty seems to acclaim should be banned from every stadium and allowed back only if able to prove he – it would be a “he”, though women were among the “likers” – no longer represents a threat to others.

I did try to point out to Matty that unless there genuinely was an issue of self-defence, which could change my view greatly, this was an act of lowlife thuggery. I even thought a light might go on above his head when I mentioned that Sunderland supporters have often enough had to make do with whatever seats they could find in home ends. I have seen yobs wearing other clubs’ colours make similarly disgusting attacks on our fans.

Matty replied with a routinely abusive tweet that he seems subsequently to have deleted. Perhaps he’s now considering civilisation as an option to barbarism.

5 thoughts on “Back to the neanderthal age of football?”

Next Post
The First Time Ever I Saw Your Ground: Fleetwood Town and Highbury