Malcolm Dawson writes….this was a pretty good day all round. The sun was shining as we left County Durham and it stayed that way as we made our trouble free journey down the A1 and M62 arriving at Brighouse just as the sun climbed above the yardarm. Surprise, surprise the pub was awash with red and white striped shirts enjoying a beer and a Wetherspoons breakfast. I’d hazard a guess that most other pubs near the roads leading to Rochdale in this part of West Yorkshire and over the county boundary would have been the same.

We managed to get parked close to the ground and I got myself a commemorative mug. 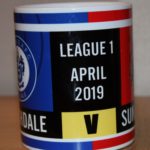 There are many different ways to win. The home game with Rochdale had been relatively straightforward and provided the satisfaction of a comfortable victory, but there is a different kind of contentment that comes from conceding early then sealing victory in the dying minutes. As we saw in that first game of the season against Charlton, and last week at Wembley, this is a team that will keep trying until the final whistle and testament to the work ethic that Jack Ross and his backroom team have instilled at the Academy of Light.

And still the sun shone.

I was home by 7.30 which is not much later than many a journey back from the Stadium of Light when there’s been a big crowd. On the whole a pretty good day.

Rochdale might be struggling near the foot of the table but there have been few easy games in this league and this was another where our boys had to dig deep to get a result. How did Pete Sixsmith see things and what sort of day did he have? Read on to find out. 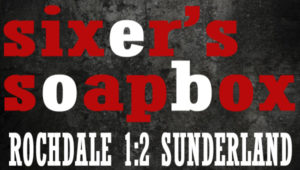 The Duke of Wellington was not a great football fan. As a pupil at Eton College, he was probably more inclined to the eponymous Wall Game before he became an eminently quotable soldier and politician.

He preceded the European Reform Group by two centuries when he said “We always have been, we are and I hope we shall always be, detested in France.” His view of railways was spectacularly wrong – “Depend upon it sir, nothing will ever come of them” – but he was often succinct with his advice. When, in his dotage, he was asked by Queen Victoria how to rid the Crystal Palace of sparrows, he replied “Sparrowhawks, Ma’am, sparrowhawks.” It worked.

His best known quote relates to Waterloo – the battle not the station – which he described as “the nearest run thing you ever saw in your life” and that could well be a summary of the win at Spotland on Saturday, a win that left us maintaining our lead over a dogged Portsmouth, breathing down the necks of a worried of Barnsley and putting us within catching distance of long time leaders Luton Town.

It was by no means the footballing master class that we produced on Wednesday. This was a win that had to be dug out after we went into the break a goal down to an invigorated Rochdale side who gave everything and ended up with nothing. Had I been a neutral, I would have felt some considerable sympathy for them and their newly appointed manager, Brian Barry-Murphy, but sympathy is of no use if you are in the relegation zone.

It needed a performance of some character to overcome them and we got that in the second half, with Charlie Wyke, Dylan McGeouch and Luke O’Nien leading the way as we stormed back to take three oh so valuable points and send a shudder down the spines of Tykes’ and Hatters’ fans and management.

Aiden McGeady, the catalyst of the splendid win at Accrington on Wednesday, was missing and was replaced by Lyndon Gooch. He lasted half an hour before he limped off and was replaced by George Honeyman. Cometh the hour, cometh the man as they say in the gentrified parts of Southwick, Shildon and Shotton.

By half time we were a goal down and struggling. Rochdale had absorbed our early pressure, with keeper Josh Lillis making a fine save from Will Grigg and when our defence committed its only serious lapse, Ian Henderson was on hand to take advantage of a Joe Bunney cross to put Dale ahead.

Henderson formed a striking partnership with Aaron Wilbraham, a partnership with a combined age of 73. The former is a mere stripling of 34, the latter a venerable 39 and they caused us some problems, mainly by denying both Baldwin and Flanagan the space to move forward. At Accrington on Wednesday and at Wembley, both had brought the ball out. This was denied them here.

Henderson’s shot was the only one on target from a Rochdale player and McLaughlin had a relatively quiet afternoon although he did make a fine second half save when a clearance from Baldwin ballooned into the air and he had to be quick to push it over the bar.

The players did the usual “girding up of loins” and showed their character and fitness in the second half. 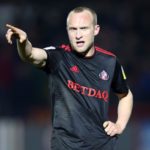 Dylan McGeouch was outstanding, fetching and carrying and wearing out Camps and Rathbone, who had thwarted him in the first. His drive and energy enabled us to spend the entire forty-five minutes on the front foot and he will continue to play a major part in the promotion push.

Charlie Wyke had won many sceptical fans over on Wednesday with a thundering performance at The Crown Ground. He did it again here and was rewarded with the kind of goal that he scored for fun at Carlisle United and Bradford City.

Denver Hume played him in and he rolled a Rochdale defender before turning and tucking away a well-placed shot beyond the keeper to level the scores and create an impetus that ended up with a late, late winner. He looks fitter and more up for it and he appears to enjoy working with Grigg. There is less pressure on him and Grigg is a much more straightforward player to link up with than Josh Maja was. The sound of his name ringing around Spotland will have done him a world of good. 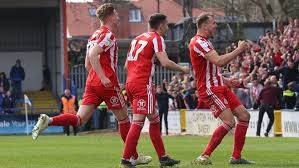 We pressed for the winner.

Denver Hume, a tad disappointing today, was replaced by the returning Bryan Oviedo which meant that the thrust of our attacking came from the full backs. By this time, O’Nien was running Joe Bunney ragged down the right hand side and it was from here that the winner came.

In the 89th minute, O’Nien once again got past Bunney and into the box. His low cross was picked up by George Honeyman who turned it past Lillis to send the 3,500 Red and Whites into a frenzy and to heap despair on the Blue and Whites who were preparing to celebrate a point well taken.

We closed the game out comfortably and news came through that Luton had drawn and Barnsley had lost so there was joy unconfined amongst the hordes as they poured back to the buses and cars scattered around the residential streets of Spotland – although in my case I missed the street where the bus had parked and had to be collected on the main road having walked a mile away from the ground. My face was redder than a Sunderland track suit top. Silly old fool…….

Sometimes promotions are won when you have to dig a win out. We are good at come backs and have a reputation for resilience. Late goals at Walsall, Wycombe and now Rochdale have put us in a strong position. The squad is the deepest in the division and players who have come with strong reputations and had not so far lived up to them, have stepped up and shown why Jack Ross and Tony Coton brought them to the club in the first place. Others have improved as the season has gone on and have played major parts in continuing this promotion push.

The only drawback in going up is that it takes away the visits to places that we have rarely been to before. Rochdale was a pleasure. The sun shone, the town looked good and there was plenty to do pre match.

Many headed for a large Wetherspoons where a customer came in, took his coat off and revealed a Newcastle United top. He was ushered out by staff as the Greater Manchester Constabulary arrived and called him an idiot. 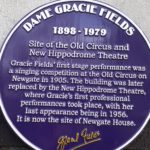 My wanderings took me past the site of a theatre where Gracie Fields made her first public appearance, I gazed in wonder at the Gothic splendour of the Town Hall,

so admired by Hitler and spent a pleasant hour in the Rochdale Pioneers Museum where I bumped into Gary and Jane Stout. He has just retired from teaching so I was able to assure him that it was a time to look forward to.

The Baum next door to the museum fed and watered me with a cottage pie with pickled red cabbage and a pint of Admiral from Rochdale’s Pictish Brewery. Should you find yourself in the town I heartily recommend this fine pub with its cheery bar staff and excellent food and drink.

So, apart from wandering the roads of Rochdale post match, a grand day out and a pleasant journey back in the light. Home by 8.00, I even stayed up to watch the highlights on Quest. I shan’t be bothering with that any more.

We now go into a sequence of three successive home games which will define where we finish up. Let’s get behind the team and roar them home. Near run things are fine once in a while but straightforward victories are much better for the blood pressure.

I don’t know what the First Duke of Wellington would have made of all of this, but he would have admired the fighting spirit of Jack Ross’s troops.

“Up Guards and at ‘em” seems a fitting way to end.

5 thoughts on “Sixer’s Rochdale Soapbox: a victory won on the playing fields of Cleadon”

Next Post
Sixer’s Sevens: a good day for Sunderland at Rochdale, Burton and Luton