John McCormick writes: My mam worked in a munitions factory during the war, so I suppose she was – “the girl who makes the thing that holds the oil that oils the ring that works the thing-ummy-bob that’s going to win the war.”

It’s because  Pete Sixsmith resumes his journey around football grounds and his “First Time” series with a visit to Rochdale, home not only of the Pioneers, Cyril Smith, Lisa Stansfield and a football ground once known as Spotland but also Gracie Fields, who sang some excruciating songs before heading off to Capri, much to my mam’s relief.

I was there a couple of years ago for an early season EFL Trophy game, in the days where we didn’t show a great deal of interest in it and we lost on penalties after Elliott Embleton (currently injured at Grimsby Town) had put us ahead. The prolific and iconic Ian Henderson equalised a few minutes later and we lost 4-2 in the penalty shoot-out. Of the team that evening, only George Honeyman is in our current squad although Josh Maja did play a full game. Jan Kirchhoff completed 90 minutes to raise our hopes and Jason Denayer, who is currently at Olympique Lyon, also turned out. Maybe M Salut could pop over and see him.

Rochdale, imaginatively nicknamed “The Dale” which I suppose is better than “The Spots” but not as historically relevant as “The Co-Ops” or “The Pioneers,” hold two unwanted records i.e. the longest period of any current member of the 92 never to have played above the third tier and the lowest average league position of all the clubs that have continuously played in the 92 since four national divisions were introduced in 1959, standing as they do at 76th. Success and Rochdale do not go hand in hand.

The Crown Oil Arena, or Spotland to give it its proper name is situated in the district of, er, Spotland and is shared with Rochdale Hornets Rugby League club. It’s a tidy ground which has a capacity of 10, 249 which means that just over 10% of Rochdalians could squeeze into it should they so wish.

They rarely do as they have a “small but loyal fanbase” which makes them a bit like many current and former northern lower league clubs – Halifax, Hartlepool, Darlington, Middlesbrough – and like the first three, they have flirted with the dreaded drop into the hell of non-league.

The closest they came was in 1980 when relegation was not automatic and clubs were elected to the Football League. They had finished bottom for the second season out of three and, having survived in 1978 (Southport were hoofed out that year) they once again survived by the skin of their teeth, garnering a single vote more than Altrincham. Since then, they have avoided the relegation places and have had a modicum of success, being promoted twice, both times under Keith Hill. He got them up in 2010 after two unsuccessful play off campaigns and they stayed where they were for two seasons although Hill decamped to Barnsley.

Things did not improve this year and Hill was relieved of his duties a month ago with The ‘Dale ensconced in the bottom four.

Hill brought stability and success; the next man may not get the time to do either.

I first visited Spotland on the 14th March 1987 when I sacrificed a home game against Plymouth Argyle to visit my brother in Southport for the weekend. This was the season we slipped out of the Second Division under Lawrie McMenemy. He was a fortnight away from being given the old heave-ho and the football was so dire that I just couldn’t be bothered. I missed a 2-1 win as well, thanks to goals from David Buchanan and Paul Lemon which kept us in 15th position out of 22 and we felt that safety was almost certain. How much do we know, as the Football Gods laughed at us and sent us on a run where we only managed 2 points from a potential 24. We finished 20th and lost to Gillingham in the play offs.

I saw Rochdale play Lincoln City that afternoon. The ground was dilapidated, the crowd was paltry (1,490) and the football wasn’t great. City were sat in mid table after reaching the edge of the promotion group in January and they were looking to get back on track.

The manager who had overseen that good start and the subsequent slump was George Kerr, brother of Bobby, who had spent much of his career in Lincolnshire. He had played at Barnsley, Bury and Oxford United, ending up at Scunthorpe United and then managing Lincoln City, Grimsby Town, Rotherham United, Lincoln City (again) and finishing off at Boston United.

His replacement was Peter Daniel who had made 35 appearances for us and who was a part of the Milk Cup Final team, back in the days when defeat at Wembley was the exception rather than the rule. He was still playing and turned in an accomplished performance as The Imps (now that’s a nickname!!) drew 1-1 and halted their slide.

Except they didn’t and when the crunch came, they lost their last game at Swansea while Burnley played Orient at Turf Moor and won 2-1. That game was deemed so volatile that G.C. Courtney (Spennymoor) was despatched to referee it.

Still, if Torquay lost their last game at home to Crewe, they would go down instead and with minutes remaining Lincoln were 2-1 up and The Gulls were looking like becoming the first side to be relegated from the Football League to the Conference.

Enter Bryn the police dog, who bit Torquay player Jim McNichol causing a five-minute delay while he was treated. It enabled Hartlepool born Paul Dobson to equalise and save United from the ignominy of going down. Instead City spent the next season travelling to Enfield, Fisher Athletic and newly promoted Wycombe Wanderers. They bounced back straight away, pipping Barnet by two points and exchanging places with Darlington.

As a town, Rochdale has a fine history and some splendid buildings. It was originally noted for the quality of its woollen cloth but the advent of cotton and machinery turned it into a boom town. Some say that it was the first industrial town in the world. The population grew and unscrupulous mill owners and shop keepers conspired to pay the workers in tokens and then adulterate the quality of the food.

So, on December 1st 1844 in Toad Lane, a group calling themselves The Rochdale Society of Equitable Pioneers set up their own store to sell good quality food at low prices and pay the members of the said Society a dividend.

This was the beginning of the Co-Operative Wholesale Society, whose stores were such a feature of industrial towns. The Co-Op divi bought many a Christmas present in places like Shildon, Salford and Sowerby Bridge. 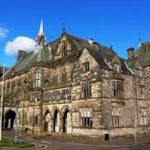 It has a mightily impressive Town Hall, designed by Alfred Waterhouse who built the ones in Manchester and Darlington, but Rochdale’s trumps them due to its William Morris windows and to the fact that Adolf Hitler wanted to dismantle it brick by brick and bring it to Germany once he had seen off Captain Mainwaring and his doughty crew.

The most famous resident of Rochdale has been dead for nearly 40 years, but the name of Gracie Fields is one that the older readers (are there any others?) of this blog will remember. 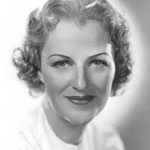 Born Grace Stansfield, above a fish and chip shop in the town, she was a genuine Working-Class Hero. Songs like “Sally.” “Walter, Walter, Lead Me The Altar’ “The Biggest Aspidistra In The World,” and “Stop and Shop At The Co-Op Shop On Your Way To Spotland” (I made the last bit up) endeared her to the British public.

She made films where she epitomised the strong, Northern working-class woman which has been passed down through characters like Elsie Tanner, Hilda Ogden and actors like Maxine Peake and Anna Friel.

I am looking forward to this one. Hopefully, we will have collected three points in North East Lancs on Wednesday and can double that total in the same area on Saturday.

1 thought on “The First Time Ever I Saw Your Ground: Rochdale and Spotland”

Next Post
The Rochdale Who are You? Sunderland should be too good to let Wembley affect them