John McCormick writes: Me and Mr Sixsmith are pretty much of an age yet when it comes to the archives he leaves me standing. I can’t remember Andy Kerr, don’t believe I ever saw Harry Hooper and I definitely never saw Brian Clough. Roker was too difficult for me to get to on my own and there was no one to take me. I could have got to Newcastle easily but didn’t, and I had to wait another season before I could follow the club I had chosen over them.

But, ladies and gentlemen, I did get to see Charlie Hurley, Jimmy Montgomery and Nick Sharkey, among others. I can count myself blessed.

But I digress, unlike Pete, who would never divert from SAFC to discuss TV programmes or topical music.

We’re going back a long way for this one, to a world of black and white TV, food that was designed to fill you up rather than tantalise your taste buds and footballers with first names like Harry, Stan, Len and Charlie.

It’s Easter 1963. Sunderland AFC were in their fifth season of involuntary exile from the top league and they mounted an impressive promotion challenge. Since the beginning of December and a 3-0 win at Huddersfield, they only spent one week out of the two promotion places and the crowds were on the up with anything below 35,000 a real disappointment.

But they were being stalked by Stoke City and Chelsea. Stoke had appointed a youngish manager in Tony Waddington, and he pulled off a master stroke by tempting local hero Stanley Matthews to return to his Hanley roots and turn out for the Potters. This led to a bit of a spending spree with Eddie Clamp joining from Wolves, Dennis Viollet coming from Manchester United and Jimmy McIlroy finally turning his back on Bob Lord and Burnley and travelling down the M6 to Staffordshire (or at least he would have done if it had been built).

Chelsea also had a young manager in the inventive, abrasive Scot, Tommy Docherty. He had taken a struggling team and club and by judicious use of the transfer market had put them on the right road.

And they had a little inside forward from Tottenham by the name of Tommy Harmer who broke our hearts five weeks later – but that’s another story.

Stoke had been at Roker the day before the Portsmouth game. A huge crowd of 62,138 had turned up to see an awful 0-0 draw, where City feigned injury, kicked the ball away and generally wasted time just as most Division One sides have against us this season. It’s a pity we haven’t developed that particular dark art. Think of where we would be if we hadn’t conceded at Scunthorpe, Oxford and Peterborough.

Twenty-four hours later, Portsmouth arrived, not having played on Good Friday, which may have helped them or it may have not. Their previous game was a 3-0 home defeat to Stoke City, so they must have been looking forward to playing a team who usually scored goals for fun.

This was my second visit to Roker Park. My father had taken me the previous season for a game against Middlesbrough in the company of a work mate of his who was a Boro fan. I had no real preference for any of the North East Big 3 (all in the Second Division) being an incomer with a strange accent and a penchant for a game (rugby league) that few in the region followed or understood. 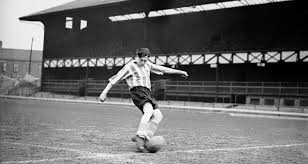 I had fallen for Roker Park on that first visit. As I walked up the steps in the Roker End, I saw the Archibald Leitch main stand, full to the gunwales and I was smitten. From that day on, I read avidly about this club and how they had the longest continuous spell in the top division and how they had fallen from grace in the 50s. I started to hang about with an older boy who lived down the street, a fellow smitten incomer.

But I was not deemed old enough to venture to Sunderland in company other than that of adults and my dad had no interest and usually napped his way through Saturday afternoons. I watched Shildon at Dean Street in the company of the aforementioned “older boy” (yes, it was Monsieur Salut) and sometimes got the bus over to Darlington where I was met by another workmate of my dad’s who took me to Feethams.

For the Portsmouth game, I went with the man who kept our local corner shop who rejoiced in the wonderfully appropriate name of Mr Corner. His emporium was on the corner of Pearl Street and Byerley Road and was the kind of place where there was a bacon slicer, a cheese dome and bottles of pop from the Jones factory at Spennymoor. 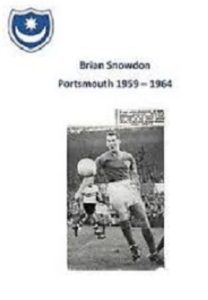 And football pictures on the wall.

They were there because, like many men of his age, Norman Corner liked the game. He was a regular at Dean Street, sometimes went to Feethams and would, once in a while, venture to Sunderland or the other two clubs that were in the higher divisions. Pride of place on his wall was a picture from Charles Buchan’s Football Monthly of a player called Brian Snowdon. He was Norman’s nephew and his career was followed avidly in the shop. After a spell at First Division Blackpool, where he rubbed shoulders with Stanley Matthews, Stanley Mortenson and dear old Jimmy Armfield, he moved to Pompey and formed a formidable half back line (ask yer da) with Harry Harris (380 appearances) and Jimmy Dickinson (764 appearances). Brian made 114 before moving on to Millwall, Palace, Detroit Cougars and Margate. 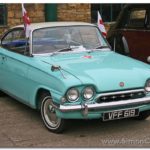 Mr Corner didn’t drive, but two of his customers did – and they lived in my road so the parents knew and trusted them. They liked a day at the football, so the grocer arranged for four tickets – to be collected at the main window – and we set off for Sunderland in Colin Trotter’s Ford Capri, a racy model that had just been introduced.

I think we parked near the New Derby pub and walked round and then, on receipt of the tickets, we took our place in the Leitch main stand. This dwarfed anything I had seen at rugby league grounds, where stands tended to be low (see Wakefield Trinity’s before it goes) and the view was magnificent.

The teams lined up thus:

Alan Brown had signed Andy Kerr to give us a push over the promotion line. Brian Clough had been injured on Boxing Day and Nicky Sharkey was not deemed ready yet. So Brown persuaded the parsimonious directors to open the club cheque book and pay Kilmarnock a staggering £40,000 for a man who had scored prolifically for them but who had flopped at Manchester City. Parallels between Clough and Kerr and Maja and Grigg are entirely at your discretion……

Pompey’s team contained two players who went on to become legends at Aston Villa – so that rules Steve Bruce out…..

Saunders led Villa to the League title 18 years later before departing the next year after a difference of opinion with Doug Ellis, and his assistant, Tony Barton, took over and guided Villa to a famous European Cup win over Bayern Munich thanks to a Peter Withe goal. 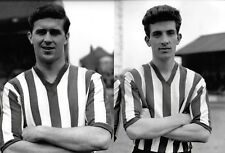 I don’t remember a great deal about the game, other than it was won in the 35th minute thanks to a fierce shot from Harry Hooper. He was a good player and was very popular with the crowd. He was from Pittington and played for Hylton Juniors but signed pro for West Ham United, because his father, Harry Hooper Senior, was the trainer at Upton Park. From there he had moved to Wolves and then on to Birmingham, making 263 appearances and scoring 92 goals for his three clubs. He played 65 times in a red and white striped shirts and his total of 16 goals was adequate in a team that consisted of natural scorers like Clough and Crossan – but not Andy Kerr.

I met him briefly in the 90s when the 63-64 promotion side had a reunion at Rainton Meadows. Clutching my 1964 Promotion Souvenir Booklet, I wandered round getting Charlie and Monty and George Mulhall to sign it for me when I saw this little feller stood on his own.

“Sorry, I don’t recognise you,” I said.
“I’m Harry Hooper,” came the reply so I told him about the goal I saw him score against Portsmouth. He seemed pleased that someone remembered it and came across as a very pleasant man.

To the best of my knowledge, he is still with us and will be a ripe old 86. If he reads this, I hope he will be proud of the impression he made on a young boy taking his first steps on a lifetime’s journey of supporting Sunderland.

On the way home, we may well have had the radio on. Colin and Pauline were music fans and there might just have been a pop music show on the Light Programme. I don’t think Mr Corner would have enjoyed it. There were a number of discs in the Top 50 then that may well apply to our situation now.

Gerry and the Pacemakers were at No.1 with How Do You Do It which might refer to our propensity to throwing away leads, while Helen Shapiro’s Oh Woe Is Me could have been written for those who trooped out of London Road on Monday. But we can still do it so hopefully Skeeter Davies’s End of The World need not necessarily apply. On a positive note, Ruby and the Romantics summed up our optimism with Our Day Will Come and The Chiffons He’s So Fine could describe any one of Jon McLaughlin, Chris Maguire, Aiden McGeady and Luke O’Nien.

Let’s hope we go home excited on Saturday to celebrate wins for us and Blackpool.

Exciters video posted on Youtube by Ina Chansons,  Jul 2012. Peter Bonetti clip posted on Youtube by TheShedEndForum, Nov 2009. If there is any copyright claim, not answered by “fair comment”, on the clips or images used in this report please let us know and we will acknowledge or remeove as requested.

5 thoughts on “The First Time Ever I Saw Your Team: Portsmouth”

Next Post
Sunderland vs Portsmouth Who are You? ‘We should be runaway favourites by now’