Malcolm Dawson writes……I said after the Southend game that I actually thought finishing 5th wasn’t such a bad thing, as I felt we stood a better chance of beating Portsmouth over two legs than Charlton, and that a one off game at Wembley against Charlton was preferable to another meeting with Portsmouth at the National Stadium. I fancied us getting the better of Doncaster in either situation if we ended up having to play them. 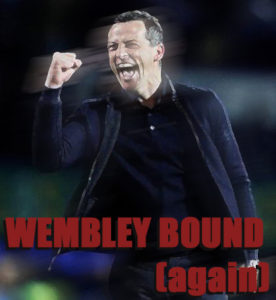 Well it looks like Donny pushed the Addicks all the way but we now find ourselves facing a repeat of the 97/98 play off final, albeit one division lower. Can we do a week on Sunday what we couldn’t do 21 years ago? Let’s hope so, though if we are successful this time, there will be a fair bit of work for Jack Ross, Tony Coton and the rest of the recruitment team to do over the summer.

This current squad have rarely dominated games but showed their character and determination in both legs of this tie. I couldn’t fit in a visit to Fratton Park, which was a shame as I could have got to Doncaster but Pete Sixsmith did. It’s a long way to Portsmouth and Pete sensibly stayed over which is why we’ve all had to wait for his match report but it’s here now. 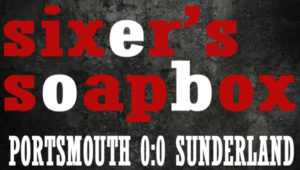 That was a tense evening. Nails were bitten (finger and toe), hankies were shredded and fingers were peeped through but in the end, we came through and we are probably all now in the process of sorting out transport and buying match tickets for Wembley.

Smug people like me took a chance and bought a train ticket a while ago once it became clear that the play offs were likelier than an automatic. Had we failed to reach the final, I would still have gone to London and booked myself into the British Museum for the Edvard Munch exhibition. The Scream would have been most appropriate if Portsmouth and their charmless fans had got there.

I have also purchased my ticket with the ease of George Sanders putting on his cravat. Simple and straightforward, all I have to do now is hope that Royal Mail and Ticketmaster between them can get them delivered pdq and then I can relax.

Which is more than I did on Thursday night.
Non
I imagine that those who watched and/or listened to it at home suffered the same anguish and torture that 1400 of us went through at Fratton Park – not that the home team ever really threatened but there was always the off chance that they might sneak one through a dubious penalty or a wicked deflection. But they didn’t.

I enjoyed the feel of Fratton Park. It’s a real old school ground which has been improved over the years and is an example of what Roker Park might have been like had we not decided to take the plunge and build a new stadium.

It still has floodlight pylons that towered above the stands although this was the last time they would be used as they are coming down. As the sun set over the yardarm, the lights came into their own and walking away from the ground at the end, through terraced streets with the floodlights shining above took me back to walking along Roker Baths Road and standing at the hatch at the Roker Pie Shop before going in to the Clock Stand Paddock.

The game was not a classic.

If you want free flowing football spiced with silky skills, this was not for you. But if you wanted to see a Sunderland side show that when they need a result they can actually hack it, you’d have appreciated this. I hope that Jack Ross and his staff get the praise they deserve. They had a game plan and it worked. They picked a team that was strong, eager and not likely to be intimidated by elements of the crowd who seemed to think that every tackle made by a Sunderland player was either a penalty or a sending off or both.

Grant Leadbitter epitomised this. He has been marginalised recently and his lack of form is probably explained by his mother’s terminal illness. As most know, she passed away the day before the game but Grant rose to the occasion and did his parents proud with a commanding performance. It was different from the vibrant attacking one that I remember from along the coast at Southampton twelve years earlier when he struck a magnificent winner to take us to the top of the Championship but it was just as important. Most definitely one of our own.

He was aided by his old sparring partner, Lee Cattermole, who was magnificent in the face of some appalling provocation. Gareth Evans, a man with a bigger mouth than Piers Morgan and Jeremy Kyle combined, committed a foul on Cattermole in the fourth minute that, had it been later in the game, would certainly have been a red card. His boot was almost wrapped round our man’s head but he got up and proceeded to snap and crackle about the pitch, timing his tackles, winning the ball and hitching up his shorts without giving Peter Bankes the slightest opportunity of booking him.

There were others who stood out – in fact the whole team did. There were no late lapses a la Scunthorpe and Peterborough, no careless challenges and no dropping deeper and deeper. We controlled this game from the first minute to the ninety sixth.

John McLaughlin was so steady and reliable that when he got a weakish punch on a cross near the end, there were gasps of astonishment from the support who don’t expect him to do such things. The confidence that he gives his defenders is palpable and they know where he is at all times. He collects the ball in a way I have rarely seen in a Sunderland keeper, using the minimum of effort and the maximum of timing. He’s my player of the year and as a former goalkeeper of some repute myself, I knows a good ‘un when I sees one.

Both full backs were excellent with Luke O’Nien even popping into the paddock to exchange banter with the Jolly Jack Tars in the crowd.

They thought he was a weak link and attacked his flank. He gave them nothing, just that lovely cheeky grin as their attempts to intimidate him failed yet again.

On the other flank, Bryan Oviedo was brilliant and showed his class throughout. With respect to Reece James and Denver Hume, Oviedo is a far better player than they are – he glides forward and, when defending, jockeys his opponents rather than committing himself. When Jamal Lowe finally appeared, he never passed Wearside’s favourite Costa Rican once.

Flanagan and Allan were a successful partnership on the stage and Flanagan and Ozturk look a good combination on the pitch. Both rarely put a foot wrong or missed a header and Ollie Hawkins, who had caused Baldwin and Flanagan problems at Wembley cut a lonely figure as he was hauled off with twenty minutes left. 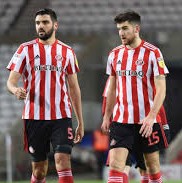 The others all played a major part.

George Honeyman is an easy target for the naysayers and doom mongers but he made them eat their words here. He popped up everywhere – a tackle in one corner, an interception in another, a pass through the middle, a header saved by the keeper; he did it all. Leave him alone. He’s not a world beater but his efforts are prodigious.

As were those of Max Power who was the junior partner in the midfield three and did all the heavy leg work that Grant Leadbitter can’t do. He was exhausted when Lewis Morgan replaced him with ten minutes left on the clock. The Scot did a good job as well by taking the ball into the corner and not losing it, I think he is a decent player and we would do well to bring him in permanently.

Chris Maguire succeeded in annoying the Portsmouth players, none more so than Tom Naylor who threw the ball at Mr Wind-Ups head. Could have been a red card, but again the ref, who generally speaking had a decent game only saw fit to issue a yellow. But Naylor was walking the metaphorical tight rope and his game was ineffective. Maguire’s second important contribution to the tie.

Charlie Wyke was left on his own to tangle with Clarke (good player; should we go up, try and sign him) and Burgess (as big a baby as Steven Taylor) and he revelled in his role. His all-out efforts have won over a sceptical fan base who, let’s face it, have had much to be sceptical about over the last few years, and we can look forward to a full season from him come August.

And finally, the home team players, manager and supporters.

If you are a Portsmouth fan or ever harboured a soft spot for them as I once did, look away now.

The players carried out their manager’s instructions to commit early fouls, roll around, dive, behave like big babies and wrestle with Charlie Wyke. Players (with the exception of Chelsea goalkeepers! MD) do as managers ask.

Ours stuck to their tasks with diligence and honesty and reflected Jack Ross.

Portsmouth’s reflected Kenny Jackett, a man with no tactical nous and a limited appreciation of the game. There were copious moans about him from those in the queue at Fratton Station and I would be surprised if he lasted the summer.

Most of the support is decent and voluble, but the snarlers, kickers and flare throwers who have disfigured this series of games do not reflect very well on Portsmouth as a city or a football club. The fool who kicked Luke O’Nien needs banning and they really need to look at the way in which their seating is allocated. Naughty, naughty boys.

I called into a pub in Fareham on my way back to the hotel and met long time Fareham residents Ian Tindale and his lads George and Harry. Loyal Mackems surrounded by Saints and Pompey, we shared memories over a beer and a couple of Jameson’s to set the seal on a very rewarding and ultimately enjoyable evening.

More of the same on Sunday 26th will do nicely.

8 thoughts on “Sixer’s Portsmouth Soapbox: dogged, determined and disciplined as the Lads get to Wembley”