Malcolm Dawson writes………none of us really wanted to go through the playoffs, even those who would have settled for that scenario before the season kicked off, but for Pete Sixsmith they represent an increased workload. With 46 league games to report on, plus all those cup ties and his twin series of First Time Evers, he is doing far more than his fair share this season, so we agreed that I would once again step onto the soapbox to cover this game.

Rest assured he was at Highbury last night and he will be at Southend on Saturday, where he is making a weekend of it, so you may have to wait until Monday to get your Sixer fix, via his final soapbox of the regular season. Until then you’ll have to put up with me and what John McCormick suggested might be a more measured assessment of events at Highbury Stadium than Peter might have provided. 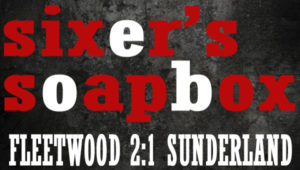 About ten times a year I have a commitment which takes me to Lytham St Annes, just south of Blackpool, and this rearranged fixture with Fleetwood fell slap bang in the middle of one of those weeks. So last night’s game was only a short drive for me up the Fylde coast and knowing someone who lives only five minutes from the ground, parking was no problem. The final part of my journey was literally a walk in the park and while Pete Sixsmith was snoozing on the coach back to County Durham, I was back in my hotel having a brew and mulling over a game which to my mind was a microcosm of the whole season.

We started off well, and jumped ahead, seemingly in control and way ahead of the opposition, but failed to consolidate our start. Then came a bit of a wobble but with still enough of a showing to suggest we might find a way back, until crash, bang, thank you mam and our fate was sealed. This was the first time all season we have been beaten after taking the lead, but not the first time we have been unable to build onto, nor even hold onto an early advantage.

Fleetwood’s stadium has been smartened up considerably in recent years, but still retains elements which reflect the fact that not so long ago this was a club playing in the Evostick North including the clubhouse in the corner, which has to have advertising banners in front of the windows so you can’t enjoy a pint and watch the game at the same time – just one more thing for me to hold against Margaret Thatcher.

The whole ground holds less than six thousand and from my vantage point I was able to scan our section of terracing and identify people I knew, including Wrinkly Pete and others of the HoE branch who I waved to, but who didn’t acknowledge my presence in the posh seats. Disappointingly, the stand opposite was only half full and almost half the total attendance of a tad over 4,000, would have been wanting a Sunderland win.

We started with three changes from Saturday’s team with Gooch and Maguire replacing Honeyman and McGeady and Will Grigg leading the line in place of Charlie Wyke. Grigg is a different type of player to Wyke and this formation saw us playing more controlled, possession football, looking to create gaps in the Fleetwood defence, rather than hump the ball to, then play off a target man. I thought we did it well in that first half. We dominated possession and moved the ball better than we have done for some time, but for all the attempts to create scoring opportunities, we were mostly ineffective. When we did lose the ball we never seriously looked threatened and McLaughlin was always in the right place and hardly had a save to make.

Up the other end Alex Cairns in the Fleetwood goal was seeing a little more of the ball, saving well from Max Power after good work from Maguire and a cross from Lewis Morgan. On another day it could have gone in but credit the keeper for a good stop and then grabbing the ball at the second attempt, before Power could finish it off. Soon after Will Grigg curled a shot onto crossbar. On another day that too could have gone in but rebounded to safety. Grigg had another opportunity not long after that, but this time a rather tame header was an easy catch for Cairns.

Earlier, Lee Cattermole had tried his luck from outside the box and had seen his effort go high, but it was he who finally broke the deadlock and got us the goal our bright start deserved. A corner on the right was whipped in by Lewis Morgan and Catts got in a glancing header following his near post run.

One nil as news was coming in that the Posh were two nil ahead at Portsmouth and the buzz around me was whether the impossible scenario might still be a possibility come Saturday? Personally, at that stage and with how we were playing I thought it might be, but only if we could eat further into the GD deficit with at least another two goals.

There was little in that first period to suggest we wouldn’t go on to win the game, but anyone who has seen us on a regular basis would not have felt confident that we would.

Joey Barton, who unsurprisingly had been the object of some less than complimentary comments from the away sections of the ground, made one change at half time but it wasn’t really obvious that there was any change in formation or approach from the Fisherman. Rather, as we have unfortunately seen several times this season, it was our own performance which slipped after the break. We became more wasteful in possession, lost more second balls and defended deeper, allowing the home side to play higher up the pitch.

We were still 1-0 ahead when Sterling replaced Grigg. Sterling I feel could make a decent player in the right set up and given the right sort of service but this was not the case last evening. Apart from Ozturk, Flanagan and McLaughlin, there was little height in the side and yet those at the back seemed to think the Tottenham loanee could do the job Charlie Wyke does and pumped long balls up for him to hold onto or head on. He did neither and apart from one run and penalty shout was pretty ineffective. Honeyman came on for Maguire in a straight swap and was immediately sent crashing to the floor by Wes Burns who was only yellow carded, when a red might have been more appropriate. It would be easy to say that this might have been a deliberate ploy from the manager, who we all know is no angel, but we have seen several teams at this level indulge in dubious practices and time wasting and Fleetwood were no different. Their time wasting saw the referee add five minutes extra time at the end of the ninety, but it would only benefit the home side in the end.

We were still 1-0 up at this point but it was difficult to see where any more goals would come from. Meanwhile, Fleetwood were starting to get back into the game as former Black Cat Ross Wallace showed us a bit of trickery and produced some decent balls into the box, but it was a neat bit of interplay between Paddy Madden and overlapping full back Lewie Coyle which brought about the equaliser, as Madden found the space to side foot Coyle’s pull back out of McLaughlin’s reach.

I couldn’t see any way back after that, even though a draw was no good to us. We had some half chances but even a 2-1 win was unlikely to be enough as despite the events at Fratton Park the required turn around in goal difference meant we would still be unlikely to catch Luton or Barnsley. So the losing goal in the additional time was pretty irrelevant in the grand scheme of things, though it probably means we will have to face Charlton in the two leg stage of the play offs instead of Doncaster or possibly Peterborough. Despite my age I never thought I’d be able to say that I saw Eastham, in a red shirt with white sleeves score at Highbury, but it was Ashley, not George who grabbed the winner.

There were only three touches after that before the full time whistle went and a number of people around me went ballistic hurling abuse at the team and the club. I refuse to do that. I may criticise players who don’t show commitment or who are lacking in effort but I have never seen this squad fail to give 100%. The fact that they don’t always succeed or achieve the results we would wish to see is not down to those factors. The truth is that apart from Oviedo, Lee Cattermole and Lynden Gooch, the starting line up last night was composed of players who have learned their trade in Leagues 1 and 2 or the Scottish League.

I’d like to know how standing and berating players, including people like Jimmy Dunne who had spent the entire game running up and down the touchline in a training bib is supposed to help the side improve. Perhaps a former girl friend of mine was right when she accused me of lacking emotion, but while I am disappointed when we don’t win I can’t get angry about it unless I think the players are not trying and I can’t accuse any of them of that crime in any game I have witnessed this season.

Yes it is disappointing that we couldn’t be in with at least an outside chance of automatic promotion at Southend, but realistically we were always looking at the playoffs once we failed to beat Coventry. It has been a long season. We will have played more games than anyone else in this division, bar Portsmouth come the end of the campaign. We have a squad that was largely cobbled together over the summer, have had more than our fair share of injuries and they have, in my view, done well to achieve what they have. To my mind, Jack Ross has only made a few errors in his team selection (with Burton away being the main one) or in the way his teams have lined up, with Coventry being the most obvious example when we were too exposed at the back. Tactically we may have been more adventurous after opening the scoring as too often we have failed to press home an advantage. Hindsight would say that a few more wins and a few less draws would have been preferable in terms of points gained.

Southend is a bit of a no event game for us but could mean the difference between the Shrimpers staying in League One or being relegated. While I expect to see a few players rested for this game, we still need to put a decent side out and can’t be seen to take our foot off the gas with six teams still facing the drop.

The next time I am due over in this neck of the woods is Sunday 26th May, which just happens to be the day of the League 1 Play Off Final, so it’ll be an early drive over and find a pub showing the match if we are involved. The way things are going I’m not confident we will even feature in that game but nil desperandum. You know what they say about overweight divas.

Next Post
Sixer’s Fleetwood Sevens: Sunderland had to win, managed to lose