I didn’t know when I’d get back to this series but it seems appropriate to visit these three now, though matters aren’t completely resolved. In two of the three clubs I’m not sure when they will be, and it’s possible we’ll get to the start of the season first.

And that introduces a small problem. The origins of the series arose from my curiosity about the finances and solvency of League One clubs in the context of their having the resources and ability to mount a promotion challenge. I never intended to be digging through files in the Companies House website and thought two posts would enable me to cover 20 clubs, with a third to deal with the three where administration was possible plus Sunderland, who were facing a takeover.

It didn’t work out like that. The start went pretty much as planned but my second dip into the League revealed a level of complexity that resulted in fewer clubs being covered in slightly more depth over two posts.

And then, when I got to Blackpool, Bolton and Bury, not to mention Sunderland, not everything was in order and I did have to dig deeper than I really wanted.  I managed to cover Blackpool and got up to speed with Bolton but in Bury’s case I could still be digging. However, everything has to finish somewhere, so here’s the last post in the series:

Let’s start with Sunderland, probably the easiest by far to deal with, though conspiracy theorists may not agree. Sunderland’s accounts for 2017-18, after relegation from the Championship, were presented with a strategic report for the year ended July 31. By then Ellis Short had departed and new owners were trying to stabilise a club that was deep in trouble. Turnover had halved, from £126 million to £63 million on relegation from the Premiership, although transfers out decreased the deficit to about £20 million. Despite wholesale departures wages and salaries (down from £73 million to £40 million) were still far too high for League One, thanks to a legacy of overpaid players, some of whom who were still there. The potential for disaster was huge.

Yet there was hope. Ellis Short had wiped out a load of debt on leaving the club, parachute payments were still arriving, income streams were being explored and exploited and season tickets were selling. That, followed by bumper crowds and runs to Wembley, was enough to ensure survival and though a second season in League One beckons the club is stable.

Not everyone agrees. There are those who ask about hidden or deferred debt, destination of parachute payments, residual amounts for Ellis Short and so on, and who point to a cancelled takeover as proof that all is not well. All I can do is refer them to the most recent meeting between directors and fans, to statements about the club’s need for investment and to the continued movement out of expensive players.

All the indications are that the club can manage its finances and is able to mount another promotion challenge. That’s good enough for me, and a good place from which to move on to Bolton.

When I left the series Bolton were awaiting both the announcement of the preferred bidder for the club and the start of the pre-season. The bidder turned out to be “Football Ventures (Whites Ltd)” and the pre-season turned out to be a little bit fraught. The players who did turn up were locked out of their training ground because of unpaid bills, which may have been why they kept losing some of their first team, although the fact that players were – and are – still going unpaid might have had more to do with it. As matters stand, the players can now use the training facilities and the club is inching closer to a sale.

There are still some issues to resolve, including the sale of Whites Hotel and the actual level of debt, which is in the region of £25 million, owed to around three hundred creditors. Some of the secured creditors – ie the ones at the front of the queue, after players – are claiming they are owed more than the administrators are saying. I reckon a lot of local companies will be left out of pocket when the sale goes through, but at least the players will finally get paid. Will that leave the club in a position where they can mount a promotion challenge? Our promotion poll had them in the top half of the League. I think they will need to get more players in before that becomes a feasible proposition. Let’s not forget they will start at least 12 points behind every other team, except possibly one of their neighbours.

And so to Bury

Let’s go back a few years, to 2013, 28th May to be precise. That date saw the appointment of Stewart Paul Day as a director. That year the club published abbreviated accounts in which it was noted that it met its day to day capital requirement with an overdraft facility and loans from related parties, with no immediate requirement to repay. This presumably referred to directors or their companies, and particularly SG Sports Management, owned and controlled by S Day and G Thomas, which made revolving credit of £2 million available to the club. 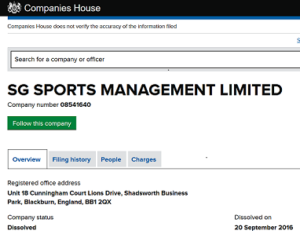 According to Companies House, SG Sports Management was incorporated on 23 May 2013 (a week before the takeover, which makes me wonder why it was set up) and dissolved on 20 Sept 2016. Clearly, from then on another source of funding was needed for a club that couldn’t operate at a profit. Not a problem, it would seem, even though accounts then and subsequently showed an operating loss of 2.5 million per year. Accounts in April 2017 included a statement to the effect that the company was meeting its requirements through loans and these would not require repayment within 12 months. Mederco, owned by Stewart Day, was providing revolving credit of up to £5 million, and could convert this loan to equity.

Only Mederco wasn’t going anywhere. Go back to the companies house website and visit Stewart Day once more. Have a look at the number of Mederco companies he controlled. Then have a look at them in detail and see how many were active by the end of 2018.

Stewart Day made money through property development and building management. One  speciality was the building of student residential blocks up and down the country. Huddersfield, Cardiff and many more benefited from his presence. Institutional and private investors were invited to buy apartments which would then be rented out and provide an income. There were sidelines, too. Parking spaces were sold at Gigg Lane, with investors told they could receive income from them.

It didn’t quite work out. Some of the properties didn’t open on time, there were problems with safety certificates, rents didn’t arrive when they should have and the businesses lost money. Lots of it. By the time 2018 ticked over losses were up to £27 million and Mr Day needed to do something.

So he shut down a lot of his businesses and transferred ownership of Bury FC to Steven Dale for £1, a change that was recorded as taking place on 7th December 2018, a month before Mederco went into administration.

Did that improve things? The club were promoted at the end of the season, so the immediate answer is “yes”.

However, Mr Dale is claiming Bury’s debt was greater than appreciated when he took over the club – it is being pursued for millions by creditors, and loans are secured on both the ground and social club – and in the face of various winding up orders (HMRC want a lot of unpaid tax) and so on that he had to introduce cost-cutting measures, hence non-payment of wages (which began in February), movement of trophies to a new company (Bury Heritage, in order to safeguard them and it’s definitely not asset stripping) and a failure to maintain training facilities at Carrington, from which the club are likely to be evicted. So a more considered answer is “no”.

Furthermore, it appears that Mr Dale has yet to provide the EFL with proof of his financial worth. Without such proof that he can pay new players the club can’t sign any, and as the ones already there aren’t being paid no one is sure how many will remain before the season starts. Their promotion winning manager has already left, replaced by Paul Wilkinson, whose managerial career is marked by the relegation of Truro from the National League South.

Mr Dale’s most recent attempt to resolve issues involves a Company Voluntary Arrangement (CVA) which would see some creditors receive about a quarter of what they were owed. It wouldn’t clear the debt charges on Gigg Lane or the social club, and it would result in a 12-point deduction but the players would get paid. A decision was expected earlier this week but it has been postponed until near the end of August. With that I don’t see any point in waiting for a resolution. I wish Bury well but survival at this level, for this season, will be no mean achievement. I can’t see them challenging the top clubs in League One for a good while, so I’ve no need to go on. If Bury fans would like to keep us up to date, or keep the story going they are very welcome to use the comments section below.

So that’s it. I hope you’ve enjoyed the series. If you missed any earlier posts you’ll find them here:

Rambling through Accrington, Coventry and Ipswich to Lincoln. How do Sunderland’s rivals shape up financially?

From MK Dons to Rochdale via Oxford, Peterborough and Portsmouth: it’s a short financial ramble

Just Blackpool and Bolton, the financial ramble continues without Bury or Sunderland.

McCormick’s Dodgy Numbers: The arithmetic’s correct, it’s just the rest could be a bit wonky

Ellis Short photo courtesy of safc.com. Gigg Lane photo ©Jarek Roover. You do not have permission to use or copy this photo. Please visit https://en.wikipedia.org/wiki/File:Gigg_Lane_from_Above.jpeg for licensing/fair use information. If there is any copyright claim , not answered by fair use, on the other graphics used in this post please let us know and we will remove or acknowledge as requested.

5 thoughts on “Sunderland, Bolton and Bury. Our League One financial ramble has to end somewhere.”

Next Post
ALS, Charlie Methven and ‘a small cabal of so-called supporters’