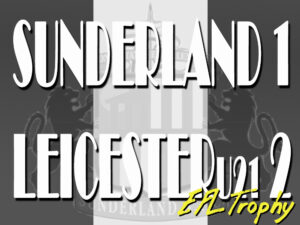 Following the expulsion of Bury from the Football League, the hierarchy of SAFC decided that free admission for season card holders to this game would be adequate compensation.

A wise move as it prevented the majority of the sparse crowd within the stadium from demanding a refund. The fact that this match took place on Bonfire Night lends itself to all sorts of puns, some of which John McCormick used for his headlines to Pete Sixsmith’s Seven last night. Well let’s get a few more out of the way.

Few sparklers as home side fail to set the crowd alight. Maguire’s rocket the only bright spot as Sunderland’s display fizzles out. Fox cubs provide the fireworks as Cats’ Wembley ambitions go up in flames.

That last statement is not 100% accurate as a win at Scunthorpe next Tuesday will see the Lads get through the group stages but if last night’s performance is anything to go by a cup final at Wembley and promotion to the Championship both seem a long way off. It may well be that league games are the priority in the minds of the management, the players and the supporters but surely games like this ought to be the opportunity the club needs to try to implement the manager’s plans in a competitive environment, for players who are not automatic first choices in their positions to challenge for a spot in the starting line up and for those long suffering fans who took the trouble to turn up, to enjoy a bit of entertainment on a chilly night.

None of the above occurred last night.

For me the most entertaining thirty minutes was spent on the drive into town, listening to “The Lost Hancocks” on Radio 4, where a group of actors recreate lost episodes of “Hancock’s Half Hour” from the original scripts. Last night’s programme started with Hancock dressed as a schoolboy, badgering passers by for a penny for the guy (Bill Kerr wearing a mask and sitting in a pram) and ending with the two of them given long prison sentences after falling once again for a bit of nefarious behaviour from Sid James. I’ve just about given up on BBC Newcastle’s Total Sport as it takes me about thirty seconds to either get totally bored or totally frustrated with the repetitive nature of the pundits and callers stating the bleedin’ obvious. On Monday when I switched on I heard John Anderson saying “VAR isn’t working. Get rid of it.” Last night I tried again as I set off for the match, only to hear John Anderson say “VAR isn’t working. Get rid of it.” Some caller was bemoaning the fact that our squad was poorer than last season’s and was only League 1 standard and I was thinking “what do you expect when we are forced to replace Lee Cattermole, Brian Oviedo and George Honeyman with Conor McLaughlin, George Dobson and Laurens de Bock for financial reasons?”

On paper we had a strong starting XI. Admittedly most of the team do not seem to be Phil Parkinson’s preferred options but Benji Kimpioka apart, all have had plenty of first team experience and all should have been looking to put themselves at the forefront of the manager’s thinking when he gets around to picking his side for the next league game, which may or may not be Bristol Rovers in ten days time. Not one of them did themselves a favour last night. I was surprised at how few youngsters featured. Only one of those I watched at Hetton on Sunday were even on the bench and that because of Lee Burge’s injury. No Bali Mumba, no Jack Bainbridge (thus denying me the opportunity of a jumping jack pun), no Ruben Sammut, no Williams Kokolo. Only Benji Kimpioka of the 17 might be classed as a fringe player with Anthony Patterson providing cover between the sticks.

Many fans seem to think that any young player who has a bit of success at U23 level will automatically reproduce their success in the first team. We’ve seen it in the past with Connor Wickham and Duncan Watmore and now there are those who are demanding the manager starts Benji Kimpioka but for me he looks far from ready and did little to convince me otherwise yesterday. A few good bits of close control and a few twisty runs but nothing that looked threatening. When he elected to run, he inevitably ran into a wall of defenders and lost possession and when he looked to pass found a young man in a blue shirt rather than one in red and white. A bit like a Swedish Duncan Watmore who did much the same. Those two, plus Marc McNulty and Chris Maguire were supposed to be the attacking threat, but all game we played too narrow and they frequently found themselves trying to get the ball at the same time.

We look most dangerous when we play with width, get around the back of defenders or whip balls into the box early. Luke O’Nien’s goal against Southend was a good example of this. Last night it was all tippy tappy out wide with little attacking intent, or tippy tappy in central areas outside of the 18 yard box, looking for a clear shot on goal, which rarely came and when they did come were either off target, blocked or easy for the keeper to deal with.

Conor McLaughlin started at right back and on paper he is a more natural full back than O’Nien but as the saying goes he plays on grass, where he is slower going forward, takes longer to get back in position and his attacking threat is less dynamic. He can be turned quite easily and it was he who gave away the penalty which gifted City the equaliser. Mind you it was as soft a pen as you are ever likely to see, with the slightest of shoulder to shoulder contacts. A poor decision from another poor referee at this level. It would be less hard to take if there was some consistency but far worse fouls went unpunished.

We had taken the lead in the thirteenth minute when Maguire produced a carbon copy of his free kick against Tranmere but that was it for the rest of the evening. We did get the ball in the net a second time when Leadbitter took a quick free kick, chipping the ball to McNulty who buried his shot. The result? Disallowed goal, retaken free kick and a yellow card for Leadbitter. I thought the idea behind free kicks was to deter foul play and hand the advantage back to the team who had been sinned against. Shows what I know.

Leicester’s second goal was smartly taken by the stately home that is Dewsbury-Hall, whose powerful shot across McLaughlin (J) found the far corner, but came about thanks to poor defending and the failure to clear our lines when McGeouch miskicked 20 yards out. Two goals in three minutes and we never really looked like getting back into the game.

Lynch and Willis have nothing to fear and it is clear why they are now the first choice centre back pairings. Ozturk, back from injury lasted less than forty minutes before suffering further hamstring problems. As early as the third minute he had almost gifted the visitors a goal following a mix-up with our man in light green but managed to recover and put in a clearing tackle. Overall his distribution was poor and we looked stronger at the back when Willis replaced him. Tom Flanagan was nothing to write home about without being dreadful. De Bock did nothing out of the ordinary either and Leadbitter and McGeouch were ineffective and created little in the way of an attacking threat.

The whole performance was underwhelming, with too much short passing, not enough use of the wide areas and a preference for playing the ball backwards and sideways. The only players with any pace just wanted to put their heads down and run and inevitably played the ball too far away from their bodies and conceded possession far too easily.

Usually I am able to find some positives from the most disappointing of results. Ah well if this is anything to go by I won’t be shelling out any money on trips to London next year.

We have another two games before the league programme resumes so two games in which to look for improvements. Another win for Ipswich last night and it already looks as if there will only be one automatic promotion spot up for grabs. At this rate I can’t see us filling it.

Highlights for anyone in the UK who wants to see them via safc.com

PS – it would appear that the gremlins preventing anyone leaving comments are still with us. Apparently you can say what you want to say through the Salut! Sunderland Facebook group should you be so inclined.

1 thought on “Remember, remember the 5th of November? SAFC v Leicester U21s one to forget”