I imagine that Bolton, after all their recent trials and tribulations, are just pleased to be in existence, unlike near neighbours Bury, who may well start in the North West Counties League next season and enjoy trips to Padiham, Lower Breck and Barnoldswick.

The Trotters brought a decent number of fans with them who made it clear that they were not over enamoured of the style of play that previous manager, and our current incumbent (or at least he was when I wrote this), Phil Parkinson had adopted at Horwich. By the end of a gruesome 95 minutes that was as enjoyable as having all your teeth pulled out by Nosher Stibbs with his rustiest pliers, many of those who had remained in the forlorn hope that we might sneak a win, agreed with our Lancashire counterparts. 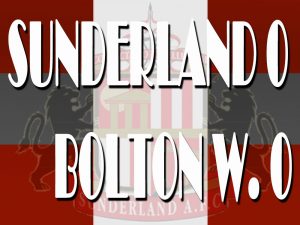 For the youngsters on our bus who were being given a Boxing Day treat by dads and grandads, this may well put them off Sunderland AFC for life. The lack of young people making the journey, sitting in the stands and actively supporting the club is worrying – although only to the likes of us oldies, as those in nominal charge of the club appear only to have no long-term interests in SAFC.

The annual remembering those who have left us this year was a shambles. There was a good visual tribute to Billy Hughes which was well compiled, but when the minute’s silence started, somebody thought that it was appropriate to play Wise Men Say over it. It wasn’t. It was crass, spoiled the atmosphere and is yet another stick to beat those responsible for our current situation with.

The football was awful. There was a short spell where Gooch and Hume joined together down the . left and caused some problems for Bolton. Their response was the time-honoured method of fouling until the referee books you and, after Emmanuel and Lowe had gone into the referee’s notebook,  the persistent fouling ceased – for a while.

They fielded two of our former players from amongst the millions we have employed since 2006.

Daryl Murphy is at the end of his career and it showed. He worked hard, put himself about and should have scored in the second half when his header was well saved by John McLaughlin.

Liam Bridcutt was the other and he was possibly the best player on the park. Brought to Sunderland by Gus Poyet, he left after 18 months when Sam Allardyce saw him as surplus to requirements and, after moves to Leeds United and Nottingham Forest, he was snapped up on loan by Keith Hill.

Oh how we laughed when we saw him lining up at centre half. Did Hill not realise that we had the fearsome Charlie Wyke up front and that he would easily dominate the relatively small Bridcutt in the air? We sat back and waited for a stream of accurate, well hit, powerful crosses for Charlie to pop into the net.

And we are still waiting.

There were a few, but Bridcutt organised his fellow defenders, brought back his midfielders and showed our shaky back three how to set up a solid defence. His legs went towards the end, but he did really well and it was good to see him interacting with Watmore and Gooch, players that he would have come across in his time on Wearside.

Been covering #safc 4.5 years now and can’t remember a more deflating, dispiriting time than this. Twice now fans called for PP to be sacked, not many managers come back from that yet focus remains on Jan. Big gamble. And what level of quality can they now attract?Desperate times

Denver Hume got forward effectively and now needs to complete his transition from “promising youngster” to “first team regular” with a goal. He had a couple of chances but he passed on them, preferring to move the ball sideways. He was probably our best player on a day when nobody really stood out and the paucity of our playing staff and structure was there for all to see.

There is no real pace in the team, the midfield lacks creativity as neither Power nor Leadbitter have this in their game. Power is best at bursting through from deep and getting into the box, but someone needs to set him up. Presumably, that is why Jack Ross brought Dylan McGeouch to the club – and why he will almost certainly be taking him back to Edinburgh in January.

Grant is just too slow. His legs have gone and the wisdom of signing him when we cried out for someone who would give us pace and energy in that department is questionable. As for the rest, they are undoubtedly playing at the right level. These players would not deal with the Championship. Not that they are likely to see it.

The team were booed off at the end of a dismal game which, in the past, would have spoiled my . Christmas. As it is, I am almost past caring and am resigned to seeing Sunderland as a Third Division club for the next few years. The manager was ridiculed by large elements of the crowd – no doubt many were equally vociferous in their treatment of Jack Ross- and this is looking like a disastrous appointment by the owner.

The ghost of Howard Wilkinson is looming over the stadium…

And so, it comes to an end. In my first report I spoke of Kenwyne Jones, Dwight Yorke and Kieran . Richardson. Now it’s Charlie Wyke, Max Power and Lyndon Gooch. I have seen Bolo Zenden, John Mensah, Jermain Defoe and John O’Shea pull on the red and white shirt, all of them long established internationals with a pedigree that would grace Crufts. Now it’s loanees from the Championship, bargain basement signings and players who rarely produce what we need.

I fear for the future. The stadium was a little over half full for a Boxing Day game and crowds will drop as the season meanders away. Promotion is neither achievable or desirable as the structures are not in place for a Championship team and, unless the American investors are prepared to invest rather than lend, there is no way that Stewart Donald can carry a club this size.

I fear for the Academy which is no longer producing players like Jordan Henderson, Jordan Pickford,  Josh Maja and a young Grant Leadbitter. I watched a naïve Under 18 team lose easily to Birmingham City in an FA Youth Cup game a couple of weeks ago, and not one of them looked anywhere near good enough – and that included Bali Mumba. No Billy Hughes, Bobby Kerr, Colin Todd or Dennis Tueart in this batch.

I fear that the club will never again challenge Newcastle United as the top club in the region and fear that Middlesbrough will continue to outshine us as we linger in the third level. I will not se Sunderland in the Premier League in my lifetime.

It’s been a pleasure to write for Salut! Sunderland. My thanks go to Jake, Malcolm Dawson and John McCormick who have edited and set up my text. I have made a good friend in John and I hope to see him at Blackpool in March. Malcolm is always a good companion at Northern League grounds – and I suspect we will be spending a lot more time at those over the next few years. Jake is a hoot; a genuinely funny man. Thanks.

Colin, aka Monsieur Salut, has been brilliant. He has encouraged me, guided me and taught me how pieces should be written [there is no need to teach a natural – Ed]. We have been good friends for the neck end of 60 years and it was his influence over me that took me to Roker Park all those years ago, when football was a game and not the . business it is now. We have had some good days on the terraces and in the seats – and some bloody grim ones as well. The latter may be prevalent in the autumn of our lives.

Finally, my thanks go to the readers who have been loyal and faithful as all Sunderland supporters . are. The faith is harder to keep at the moment and I may be wavering. The good times may return. I hope we can all be there to share in it.

1 thought on “The Last Post: after the Bolton shocker, Sixer bids farewell”

Sixer’s Sevens: Bolton’s Happy Wanderers finish a dark year for Sunderland at the Stadium Of Light