Charlie Methven, the Old Etonian, Oxford-educated “farmer’s lad” who divides opinion on Wearside, has left his role as executive director of SAFC “for family and work-related reasons” though he will retain his minority stake in the club, writes Monsieur Salut.

The news prompted a flurry of social media comment, a little in praise, a lot of bile and some downright nonsense. In the latter category was the suggestion that he had been on the general election campaign trail with Nigel Farage and that the future “political consultancy” work mentioned in his statement below would involve working with the Brexit Party leader.

It will surprise no Salut! Sunderland readers to hear that I regard Farage as a far-right ogre intent on imposing a hard, no-deal Brexit that would devastate Wearside (and the country) and tap into the worst and most snarling, anti-foreigner instincts of society. There, said it.

But the Farage link to Charlie, he assures me and I believe him, is simply untrue. They know each other from Charlie’s journalistic work, bumped into each other on Seaham cliffs and chatted. That does not make CM a fellow traveller anymore than my shaking hands with Marine Le Pen (an act of normal courtesy when I approached her before a press conference and rally) made me a supporter of her rotten party, then called the Front National. I do regret the handshake though!

Here, though, is Charlie’s statement:

‘This is a really tough decision to make, but for both family and work-related reasons it was something I felt I had to do.

My wife and I are expecting our first child in the New Year, and the reality of my day job – which is largely political consultancy – is that the first months of a new government will be very challenging.

I’ve been a largely absentee husband, father and colleague for nearly two years, as the SAFC project took over most of my life, and it’s time that I re-paid those close to me for their patience.

As a shareholder, I will of course take a very keen interest in how we get on in the coming months and there are a couple of projects away from the day-to-day running of the club where I will continue to help Stewart and Juan [Sartori, also a SAFC shareholder], who has now returned to the country.

Finally, I would like to thank Stewart, for his unfailing friendship and some great times, the SAFC staff, who have worked hard to keep the club running so professionally as we went about a tough re-structuring and SAFC’s supporters, especially those involved with the Red and White Army and the Branch Liaison Council. I strongly believe that with the restructuring completed, and investment in place, the club now has the stable platform to move onwards and upwards.’

Stewart Donald replied: “This is a really difficult one for me, as Charlie and I have been working non-stop together on this for almost two years.

“He came and asked if he could resign a couple of months ago, as he was finding it very difficult to keep all the plates in his life spinning, but I asked him to stay on until the investment process was concluded and Juan was back in the UK.

“I am grateful that he did that, as it enabled me to take a breather and re-gather my energies for the next stage, but it will still feel odd without him, even if we still see each other on a social basis. I want to wish him and Helene all the best as they look to start their family.”

As for Charlie and politics, he is indeed a pro-Leave Tory (I am emphatically not) and “100% behind my old boss [Boris Johnson]”.

In a further exchange, he admits that Mackems have difficulties pigeonholing him.

“As an Oxfordshire farmer’s lad I am a Tory. In my parents’ village, a new entrant who stuck up a Labour poster had their window bricked. Post the hunting ban, Labour will never again win an English rural constituency. Blair correctly describes it as his biggest mistake [I could think of another!].

“However, despite that tribal allegiance (which is precisely akin to Mackem loyalty to Labour) I am actually quite left and as you know was a committed union shop steward who called and won a strike ballot [at The Daily Telegraph, where we both worked, though I never inhaled].

“I have friends who are Labour MPs, Tories and Farage. I disagree with all of them about all sorts, but in a friendly way. Most of these things are not right and wrong but based on tribalism and/or self-interest.

“I know leftist Tories in Oxfordshire and Labourites in Sunderland who are right wing. Such is life. I admire Nigel Farage for his commitment and energy and bloody-mindedness and will always say an affectionate hello. As I always would have done to Prezza. And Ken Clarke. And Norman Tebbit. My political hero is Ernest Bevin.”

I don’t suppose that will settle the debate. But it might inject of reality into it.

In 13 years of offering Salut! Sunderland to the SAFC-supporting and general football public, we have done our best to accommodate dissent. What one writer thinks or says is not what everyone else thinks. One reader – the only one whose comment could be found ‘beneath the bonnet’ before our technical issues prevented other comments being seen at all – took exception to the above, though he clearly did not read on far enough to see that his own view was at least partly reflected.

Stopped reading after the left wing diatribe. Keep your views on Brexit and politics out of football. Last I heard you don’t have to be a Remainer Labour lefty to follow Sunderland. 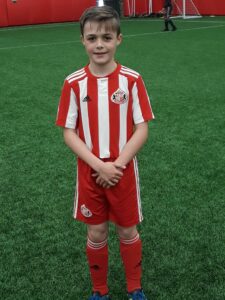 Meet Adam, the Middlesbrough-supporting grandson of a NUFC fan making his mark at Sunderland