John McCormick writes. Pete Sixsmith is still on Santa duty and mad busy. Even so he found the time to compose another epic piece. It’s better than the Labour manifesto or the Queen’s speech and more honest and compelling than anything from Boris.

And we aren’t even half way through Pete’s series, recalling the men in charge at SAFC during the time Salut! Sunderland has been on the interweb!

As Martin O’Neill packed his bags and left, Paolo Di Canio rode in through the revolving doors at the Stadium of Light. If O’Neill was the experienced US Marshal who had come to bring peace to a notoriously disruptive town, Di Canio was the young gun who shot from the hip and didn’t care who got in the way of his bullets.

It was the most divisive appointment in the history of the club. They sacked an experienced manager who had achieved huge success in Scotland and had done well in England at all levels (Pete Horan and myself saw his Wycombe Wanderers side win promotion to the Football League at Gateshead) and replaced him with a volatile, emotional and outspoken man who had taken Swindon Town from Division Two to Division One and who had caused ructions in doing that.

Di Canio had spoken of his admiration for Il Duce, The Leader, a man renowned for getting the trains to run on time, building Hydro Electric plants and draining the Pontine Marshes – and having his opponents shot or thrown into prison.

He sided with Franco during the Spanish Civil War and joined Hitler in 1940 as the Wehrmacht swept through France. He was Hitler’s inspiration, who became Hitler’s puppet, and here was a man of whom a Sunderland manager was a serious, serious fan. Di Canio described the barrel chested former Socialist as “a very principled ethical individual who was deeply misunderstood” – which is a bit like saying that King Herod liked children but sometimes they got on his nerves.

There were even greater ructions than the good folk of Wiltshire had experienced before Di Canio walked out on the Robins. David Miliband, the de facto vice chairman and former Foreign Secretary, resigned within hours of the arrival of the fun-loving fascist. The leader of the Durham Miners’ Union asked that the club return its iconic banner to the NUM. Pieces were written on web sites, in newspapers and TV crews descended on the city looking for thoughtful opinions.

Some were appalled by his appointment and referred to a photo of him giving the fascist salute to the ultras at Lazio. Others thought it was better to judge him as a manager rather than as a politician and there was the hope that he might put some energy into what was a rather sluggish and lethargic team.

He started off with a tough one at Stamford Bridge and the 2-1 defeat pushed us further down the table and nearer to relegation. The next two games were at Newcastle and at home to Everton, a team we beat as frequently as Boris Johnson tells the truth.

So, two weeks and six points later, we were singing Giovinezza and extolling the virtues of manliness after a rousing 3-0 win at the Sports Direct and a 1-0 win over the Toffees. Or at least some were. 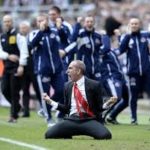 But the game is not remembered for his actions, or those of the linesman who disallowed a good equaliser from Ameobi for offside or those of Adam Johnson who scored the clincher when the Newcastle defence stood off and allowed him to pick his spot. It’s the knee slide along the touchline, the fists in the air, the torn suit and the beating of the chest that we remember. He looked like a man who had been a Sunderland supporter all his life and he breathed fire and passion into a moribund team.

When Sessegnon scored another fine goal the next week at home to Everton, we looked safe. The new manager had made a difference. The rather dull days of Bruce and O’Neill were replaced by a new era, an era where men behaved like men and where physical courage and mental fortitude were the order of the day. Onwards and upwards we would go. The sky was the limit….

We lost the next game 6-1 at Villa Park. So much for mental fortitude.

We limped to safety with a couple of scrappy home draws and lost the last game of the season to a last minute stunner from Gareth Bale and where we had six youngsters on the bench; Liam Marrs, Adam Mitchell, Scott Harrison, David Ferguson, Billy Knott and Mikael Mandron. Where are they now?

And as the great mayonnaise saga hit us in the summer, Roberto Di Fanti, a hitherto unknown football agent, became director of football and brought in the greatest ragbag of players known to man……and a whole new team that could have lined up like this: Mannone: Celutska, Roberge, Diakite, Dossena: Mavrias, Cabral, Giaccherini, Ba: Altidore, Moberg Karlsson.

Added to the players already there and we should have had something approaching a decent team. Mannone was an established keeper, Giaccherini was a real coup, an Italian international with a good scoring record, but with injury problems. Others seemed to be solid pros (Roberge, Diakite, Celutska), Altidore was a hunch and there were young European players who might learn in the Academy and make the step up.

That summer was interesting. The football world looked and wondered about how things would pan out with an emotional and excitable manager in charge after the traditional British types that the club had attracted in the past. Di Canio had his supporters and his detractors but most of us just hoped that all went well.

But there were problems. Some of the more traditional players were not keen on mayonnaise and ketchup being withdrawn from the dining tables at the Academy. Pasta became the meal of the day. The training methods were intense, although players accepted this and got on with it – as they should.

Pre season was spent in Hong Kong at some fabricated tournament. A decent Spurs team were seen off in a game played in a torrential downpour. Cabral scored a fine goal, Altidore looked a strong centre forward with much to prove after a disappointing spell at Hull City, Moberg Karlsson came on and scored. The future looked bright, the future was minus mayonnaise. Manchester City thanked us for helping them to their first league title by bursting the bubble a couple of days later, but a win in Denmark against FC Midtjylland, where Jack Colback was sent off only for the referee to change his mind, had us looking forward to the first league games with some anticipation, despite the rumours of senior players being very unhappy with the authoritarian style of the manager. 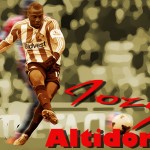 The season started with a degree of optimism and the hope that the new players would gel quickly. The opening game against Fulham. A crowd of 43,000 turned up to see and, as is so often the case with this club, left disappointed as the visitors, with their usual travelling band of 300+ fans, deservedly won 1-0 thanks to a header from Pajtim Kasami, who out-muscled Valentin Roberge to score. Roberge was one of five players making their debut that day, the others being Cabral, Ondrej Celutska, Jozy Altidore and Emanuele Giaccherini. El-Hadji Ba and David Moberg Karlsson made the bench.

A week later, there was a bust up in a Southampton hotel which resulted in Cabral being dropped, and Mobido Diakite coming in and we played quite well. Giaccherini opened his account with a header in the third minute and we looked comfortable for much of the game until Jose Fonte equalised in the 88th.

Rumours of unrest and reports of bullying continued to come out of the camp. A League Cup tie at home to MK Dons looked like turning sour when they led 2-0 with 12 minutes left, only for goals from Jozy Altidore (a rare occurrence), two from Connor Wickham and a last minute clincher from Adam Johnson saw us through.

The next two league games saw 3-1 defeats at Crystal Palace, where John O’Shea was sent off and at home to Arsenal. By this time, Di Fanti had brought in Ki Sung Yueng and Fabio Borini on loan and sanctioned the selling of Stephane Sessegnon to West Bromwich Albion. That move went down badly as Sess was a popular figure with the support and it came back to haunt Paolo.

After five games of the new league season, that point gained at Southampton was all the team had to show for its efforts. Di Canio was shown the door, Margaret Byrne claiming that as well as the poor form, his sacking was in response to a deputation of senior players claiming to have no confidence in his methods. Di Canio himself has always denied this but whatever the true story is, Di Canio was gone after only six months and 13 games.

Mud slide video posted on YouTube by  Savage91, April 2013. Graphics by Jake If there is any copyright claim on the video or images used in this report please let us know and we will acknowledge or remove as requested.

1 thought on “Salut! Sunderland’s 13 years and 13 managers. The PDC era – mudslides and mayonnaise”