With a break this weekend it’s time to revisit our “Ones to watch”.

If you’ve been following this series you’ll remember that we’re tracking six clubs over the course of the season. The six were chosen by a people’s vote, that new tool of democracy,  with the club which came top of the poll – Coventry City – also providing a baseline against which the other five will be compared.

If you’re wondering how Coventry came to be chosen click the hyperlinks at the bottom of the page. (And if you want to see how I’ve followed our selected teams in previous seasons you can follow this link ).

The last time I wrote, five games in, four of our chosen six, Peterborough, Sunderland, Barnsley and Portsmouth were at the top of the League. Charlton were in a lowly  position and Coventry City were doing a bit worse.

Since then there has been some place swapping among the first four, who have also have had visits from clubs that weren’t chosen at the start of the season, but it’s fair to say the picture at the top hasn’t changed a lot over the seven games since my last report, while Charlton and Coventry have improved.

Here’s how the six clubs are faring when it comes to points: 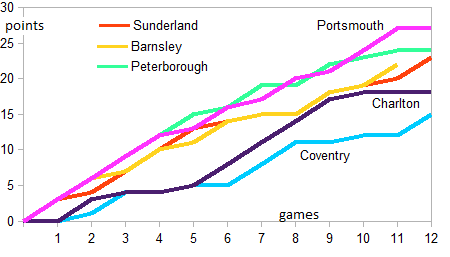 Translating points into positions leads to some close lines so I’ve enlarged that graph: 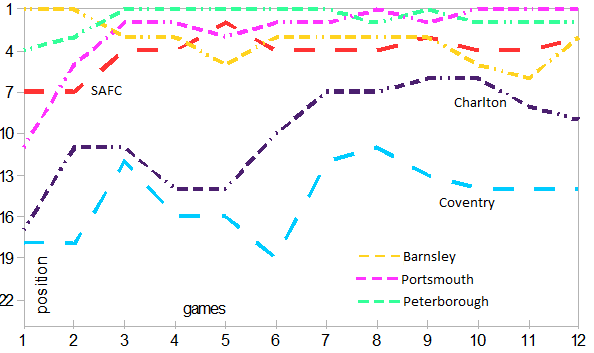 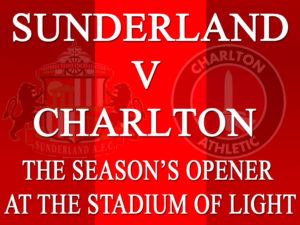 You can see that Charlton made a recovery of some kind after a slowish start but haven’t managed to break into the top six. It didn’t help their cause that they lost (narrowly) to us in the first game of the season but they recovered in September, which went brilliantly for them.

Since then, they might have expected to do well at Scunthorpe United but shipped five goals, after which they conceded two late goals to go down at home to Coventry, who are themselves just a tad too erratic for their own good.

You can see this in the graph below, where Coventry provide the baseline:

As the season progressed the other five clubs, even Charlton, pulled away from Coventry. Then came a dip in Barnsley and Sunderland’s lines at game eight, which is when Coventry beat Barnsley – no mean feat – and we lost against Burton Albion, the only club to beat us so far.

However, although Coventry could manage to hold us and beat both Charlton and Barnsley they lost to Oxford United and Bristol Rovers (who both currently occupy relegation spots) in September and the points gap is now at least as wide as it was for the first seven games.

Coventry are also the only one of the chosen clubs to have a negative goal difference and I can’t see them making the top six, whereas I can see the current top four staying there. Nor would I exclude Charlton from the reckoning, although our own experience suggests they will need to sort out a lot of issues off the pitch to achieve sixth or better.

Of the four in the top spots, Peterborough and Portsmouth are no longer invincible. Posh have even lost two of their last five games while winning only one. However, Portsmouth looked strong until last weekend, when unfancied and struggling Gillingham came home with the points. It wasn’t enough to knock Pompey off top spot but both Sunderland and Barnsley won and closed the gap a little.

Which brings me to Barnsley, best described as Loitering with intent. The League table shows them in fourth place, behind Sunderland, but my graph shows this to be an aberration. Barnsley v Burton Albion was postponed in September and they have been playing catch-up.

On a game by game basis Barnsley have had more points than Sunderland for the last three games. This weekend sees them at home to Luton Town, so they could soon be occupying third spot.  It’s not a forgone conclusion, however. Barnsley managed to win away at Fleetwood and Peterborough since that postponement but sandwiched between those very impressive results was a home draw against Plymouth Argyle, who have one of the worst defensive records in the League.

Which leaves Sunderland. We’re improving our form, have players returning from  injury and no matter how well Barnsley and  6th place Doncaster Rovers (at Rochdale) do this weekend we’ll remain in the top six  despite not playing ourselves.

That’s not bad for a team which is rebuilding and adjusting to the league, and which looks capable of digging in for the long haul. I’m optimistic  Sunderland will remain in contention. I also think Barnsley will remain solid. But will either be able to displace Posh or Pompey? Perhaps we’ll have a better idea around Christmastime, which is when I’d expect to return unless 17th November brings another postponement.

Whichever it is, I hope to be back by New Year. In the meantime, if you want to let us know what you think, feel free to leave a comment.

Other posts in this series:

McCormick’s dodgy numbers: the arithmetic’s correct, it’s just the rest could be a bit wonky

Acknowledgement: original cartoon courtesy of  wpclipart, graphics by Jake (and graphs by me).

3 thoughts on “Barnsley lurk behind Peterborough, Portsmouth and Sunderland, while Charlton and Coventry stutter.”

Next Post
Sixer’s Carlisle United Soapbox: is this the beginning of a great adventure?