Before we get on to Pete Sixsmith‘s bleakly compelling report from the 4-1 home defeat to Man City, or even look up last season’s 4-1 home defeat to Man City, spare a thought and a vote for Sixer and the others who put this site together. We won’t win the Football Blogging Awards any more than we’ll set the Premier alight. But it would be nice to see an electoral pat on the back for all the effort people like Sixer, Malcolm Dawson, John McCormick, Jake and a platoon of contributors put into making Salut! Sunderland whatever it is.

http://www.footballbloggingawards.co.uk/about/how-to-vote-football-blogging-awards/ is the link that tells you how to vote, at the FBA website or on Twitter. Now over to Sixer …

It could have been worse.

Somehow, Sergio Aquero failed to slide the ball into the net, allowing John O’Shea and Sebastian Coates to scramble the ball clear. If that had gone in it would have been 5-0 to the visitors and the clatter of seats as fans departed for their cars or the pubs near the ground would have been deafening.

No doubt some did leave at half time not to return, but most came back in order to admire a City side that looked like a beautifully prepared unit with hardly a weak link, a bit like those smooth-running Audi diesel cars that have such low emissions. Of course, it was also a side that was smarting from home defeats to Juventus and West Ham.

The win was routine, their forward play was outstanding and our defending was catastrophic.

Let’s look for positives – and, surprisingly enough, there are some. For the first 20 minutes we gave them a game. The opening was bright and had them on the back foot. The players, particularly those who Advocaat has brought in recently, those who play the European way, buzzed around and played some pacy and skilful stuff.

Even after going a goal down, we were by no means out of the game. Borini had what looked to be a perfectly good goal disallowed and Toivonen forced an excellent save out of Caballero, the only clear reserve in the City team. Unfortunately, from the resultant corner, City went straight down and scored at the other end.

There was an encouraging display from DeAndre Yedlin at right back. He fits into the Advocaat mould far better than Billy Jones, getting forward quickly and tackling further up the field. He is small but, as Julian and Sandy would say, perfectly formed and his background emphasises the melting pot that is the USA – African American, Dominican, Native American on his father’s side, Latvian Jewish on his mothers. Billy Jones comes from Shrewsbury so there may be some Welsh in his.

M’Vila worked hard and it was his raking pass that put Borini in. Unlike Defoe in the last two games, he put this one away, but Roger East brought it back for a “push” on Nicolas Otamendi when it seemed to me and most of the crowd, that the £35m defender had fallen over. Borini looked more effective through the middle with his pace and strength unsettling the City defence at times.

Cattermole did well in the second half, although the game was beyond us by then. He showed a much more careful approach to his tackling and he closed down well. Maybe he and M’Vila could form a midfield partnership.

A special hand to the stewards who had the misfortune to have to chase two 12-year-olds who ran around on the pitch for no apparent reason other than they are wee s*****. One of the boys in yellow had a turn of speed and a tackle that the England Rugby Union boys may want to employ against Wales on Saturday.

Alas, the negatives far outweigh the positives, starting with the goalkeeper. Poor Mannone looks but a shadow of the player who performed heroics 18 months ago as we stayed up and got to Wembley. Beaten at his near post for the second, he managed to flap at a centre from Sagna, and then see the subsequent shot from Sterling hit the post and bounce off him into the net. It may be a wise move to recall Pickford from Preston and send Mannone to Millwall or Mantua. If Pantilimon is injured, I have little faith in the Italian.

Playing behind a defence that is as porous as a ream of blotting paper (showing my age here) doesn’t help. Van Aanholt gave away the penalty for the first goal with a needlessly clumsy tackle on the edge of the box (ie not a penalty but a free kick if M Salut’s scrutiny of replays was correct ). Mr East consulted his assistant, who gave it straight away and Aquero does not miss a gift.

For the second goal, the pace of De Bruyne and Sterling was too much for us as they broke up field and the £55m Belgian finished with a crisp shot. Poor goalkeeping and a lack of pace in getting back did for us there.
Goal 3 was a disaster for poor Mannone and for the fourth, holding your hand up in the forlorn hope that the £49m Sterling might be offside does not constitute a defensive tactic.

Individuals to be singled out in this section are van Aanholt for his part in goals 1 and 4, where again he looked a poor defender and not a great deal better pushing on. Rodwell was awful throughout the first half and was replaced by Cattermole at the half. Here is a player who was, to quote Dave Cam, pig lover, dining club member and part time PM when talking about Tony Blair, “the future once”. Not now. Yet another insipid performance from a player who cost £10m and whose agent should be putting out feelers to see if anyone in the Championship is interested in taking him.

City are a light years away from us. They brought on an 18-year-old (Patrick Roberts) who cost them £11m from Fulham. They had a three man forward line that cost the staggering sum of £139m so it is hardly surprising that they are expected to win the League this year – and with flair.

How can clubs like ours possibly compete against that?

The answer is we cannot. On Saturday, battered and bruised, we head for Old Trafford, where Van Gaal has spent £97.75m on new players over the latest window. Another chasm yawns between a club that draws its support from its immediate community and one that has a world-wide fan base whose understanding of the balance that the English league once had is non-existent. I travel with little hope other than the chance of a decent pint in The Marble Arch.

VOTE for Salut! Sunderland at this link: http://www.footballbloggingawards.co.uk/vote-now/

Correction: we’ve had that many hits, which does not of course mean individual visitors. Unless everyone who ever came here stomped off after the first look and kept a promise never to return, the 2.9m must be divided quite a lot to arrive at the true number.

Read moreFootball Blogging Awards: vote for Salut! Sunderland if you think we deserve it 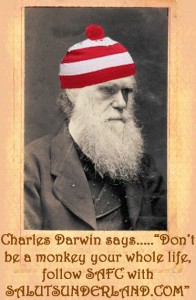 STOP PRESS: Monsieur Salut writes: I could have sworn the Football Blogging Awards website had November 7 as the closing date for votes. I looked again today, wondering whether to make one final plea for support, and found that the preliminary stage is now over and shortlists have been announced. We are not to be found. but thanks hugely to all who voted for Salut! Sunderland in any of the categories and may the best of the remaining blogs and bloggers prove triumphant. I’ll leave the original post intact below so that you have an idea of the categories and a link to enable you to cast votes in the playoffs if you wish …

Read moreFootball Blogging Awards: even Dylan and Darwin couldn’t save us

It is time to vote in the annual Football Blogging Awards. There are some big guns in the field and Salut! Sunderland is under no illusions about its chances of picking up an award. We are not sure this is how it works in the Oscars but invite you, all the same, to consider voting for us. You can go directly to the voting form at http://www.footballbloggingawards.co.uk/about/how-to-vote-football-blogging-awards/, or read on first to learn a little about one site courting your support. Salut! Sunderland qualifies for votes in four (not three as I thought) of the 11 sections: Established, Forum, Club and Young Blogger …