Read moreLuke’s World: how Sunderland could line up with or without Sessegnon

With apologies for the laboured pun – and M Salut promises not to add, ”Or Well, what did you expect?” – we present the third of Luke Harvey’s series of defining moments in the season just ended. We’ve had Signing of the Season and Opponents of the Season. Here is Luke’s Game of the Season …

Read moreGame of the Season: the road to Wigan’s peerless joy

Almost to rival the series of end-of-season reviews just begun – and to which others are free to contribute – Luke Harvey, having described the impact of our signing of the season, James McClean, gives special attention to another specific aspect of the football he saw at the Stadium of Light. Step forward Everton, Luke’s opponents of the season …

Last game of the season so Martin O’Neill’s last post-match e-mail to Salut! Sunderland (and a few others). As I awaited its arrival, I thought about what I’d like to find in it: relief that the season’s over, unbridled optimism for the next one, a hint of contrition? Would we have settled for 13th top when Steve Bruce left us in something closely resembling a shambles last November? Maybe. But the MON-inspired revival raised hopes, admittedly too high given what he inherited and had to make do with, and it is difficult for this Sunderland fan – who, incidentally, feels a little sympathy for the United fans, though this rare experience of failure may prove character building – to escape the flattest of feelings tonight. Then the e-mail dropped and this is what the boss had to say …

Read moreMartin’s Musings on keeping to script against Manchester United: time for reflection

On Saturday, as we stuttered unconvincingly to 2-2 draw against relegation-haunted Bolton Wanderers, important eyes were focused on one man. The Irish team manager Giovanni Trapattoni is preparing to name his squad for Euro 2012 and was again having James McClean closely watched ahead of his final decision on whether to include him. Reports from Dublin quote the boss as saying our man’s chances are 90 to 99 per cent. And he scored a cracker against Bolton. Luke Harvey continues his personal reflection on the season just ending with an assessment of McClean’s impact at the SoL …

Luke Harvey is Salut! Sunderland’s youngest regular writer but has already seen two Irish revolutions at the Stadium of Light. It may be a trifle early for end-of-season reviews, but Luke has been reflecting on a bumpy ride to safety – and the hope of something more glorious to come …

In truth, the Sunderland link may seem slight as Afcon 2012 prepares for launch. A glance at our history offers a reminder of its mighty origins. Luke Harvey explans … 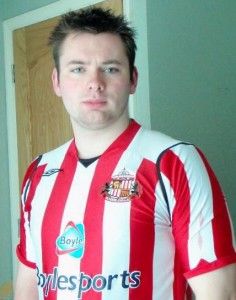 Luke Harvey, another of our regular writers, offers a hardcore enthusiast’s welcome to the return – gormless rioters permitting – of the football season …

You’ll have heard the rumours: football is back.

It doesn’t feel like very long since the season ended. For Manchester United fans I’m sure the defeat at the hands of Barcelona is still providing a dull ache somewhere within, despite the FA Community Shield victory over Man City.

But the football league is definitely back, and it will surely provide the thrills and spills as well as plenty of other assorted clichés along the way.

Never mind the Florida sun. our regular contributor Luke Harvey had some serious sporting spectacles – one with a Sunderland interest – to keep up with at either end of the day …

Everyone has their own thoughts about going on holiday.

Jetting off to a sunkissed part of the world to enjoy peace and relaxation and forget about any troubles at work. That would be one interpretation of a holiday. For me, once there, the trick was how to figure out how I could convince my family that watching Wimbledon for a fortnight while keeping up to date with the Fifa Under 17 World Cup should not be seen as antisocial.

As it turned out, it was relatively easy. Due to the time difference in Florida I could keep up with Wimbledon in the morning, though iI was often subjected to ESPN showing me whichever American they hoped wouldn’t lose that day, and I could watch the Mexico-based World Cup in the evening when the daytime pursuits were done. It all worked out rather well.

And I had an extra incentive to be interested in the Under 17 World Cup, and so should all of you: Jordan Pickford, of Washington, is on the books at Sunderland and the number one goalkeeper for England.

Read moreLuke’s World: in praise of another SAFC Jordan, England’s No 1