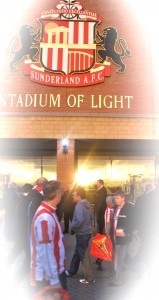 There really is no need for a review of the week today.

All the busy reader of Salut! Sunderland, who gets here only once in a while, needs to do is visit the home page – www.salutsunderland.com – and take a look at the six most recent articles all displayed there and available for further scrutiny.

There are lots of reasons why Monsieur Salut has never faced the dilemma of playing for another team against Sunderland. 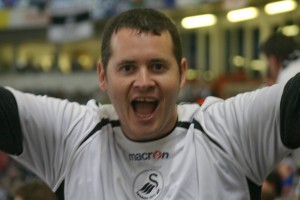 Football fans don’t get much more involved than Jim White*, who’ll be in the away end for Sunderland v Swansea. Jim is vice-chairman of the Swans Trust (the supporters’ group that owns 20 per cent of the club, a unique phenomenon in the Premier), runs the fan site SCFC2.co.uk and gets to loads of games. Even before the fine win against Arsenal, he was enjoying the Swans’ Premier experience …

Pete Sixsmith‘s test messages from South Wales suggested a day that peaked with his pre-match pint in Port Talbot and went downhill on reaching the Liberty Stadium in Swansea. At least he was spared a third defeat in a week. This is the blow-by-blow account of his day …

This is where Pete Sixsmith captures the glory or shame, hope or despair, excitement or ennui of each Sunderland game. …

This is the latest edition of Salut! Sunderland’s Week. Pete Sixsmith has worked his not inconsiderable backside off for us in the past seven days. Some of you clearly think he deserves some beer money; he’ll get some, once we’ve recorded our first win of the season, from the proceeds of the mugs and pens already ordered. If you feel like buying something, go to the Salut! Sunderland Shop now …

Most of us have known worse weeks to be a Sunderland supporter. Come to think of it, one 5-1 tonking at St James’ Park was much, much worse than a 1-0 defeat at home followed by our customary exit from as early a stage of the Carling Cup as we can manage.

But it has still been bad. We all know that only a win at Swansea today will restore the faith of lots of those now disaffected with Steve Bruce – and that plenty will remain disaffected even if we are three points better off by 5pm. We also know many SAFC supporters, long suffering or short, are some way short of confident that we can actually record our first win of the season. We shall see.

From that Soapbox of his, memories rekindled by the half of shandy’s worth of commission he’s earned from sales of mugs and pens, Pete Sixsmith looks back on what Swansea Away used to mean, and ahead to the Liberty stadium. Swansea as Steve Bruce’s Swansong? Some of us still hope nothing happens tomorrow to make that a probability …


After what can best be described as a difficult week (defeats at the hands of the Mags and Brighton and the aforementioned neighbours scraping through at Scunthorpe), we now set off on the longest trip of the season.

It’s 325 miles from Sixsmith Towers to the home of the Swans. It means a start at 5.15am, so let’s all hope that The Brucester picks a team that has at least one decent goalscorer starting the game. Maybe he could start Richardson behind Gyan – it seemed to work at Blackpool last season.

For a time, I worried it wasn’t going to come. There is no greater stress, I said, than the “Who Are You?” series. Then, in the nick of time, Phil Sumbler*, chairman of the Swans Trust (swanstrust.co.uk) – a remarkable example of supporter involvement in a football club – and leading light at the planetswans.co.uk fan site, came back with a grand set of answers to Salut! Sunderland‘s questions ahead of a match of vital importance to both teams. And second thoughts on that stress: it’s only the second biggest source, after Steve Bruce’s team selections …

Salut! Sunderland:
Thumped at Manchester City but not as heavily as we went down there last season. What did you make of the start?

That was welcome to the Premier League for sure. Manchester City need no introduction as a quality side and in the end that quality shone through on the pitch and of course was reflected in the scoreline. However, like many of the travelling Jacks at the game there was enough for us to be positive about and we have to take that positivity into the coming games.

Back from Brighton at 5pm today. Off to Swansea at 4am on Saturday, back with any luck by midnight. That is dedication, Mr Bruce, and Pete Sixsmith is far from alone in showing it, game after game. In return, last night at any rate, they were shortchanged …

I notice that M Salut is running a competition called “A Monday Lie In”.

Well, that’s what I did this morning at The Kings Hotel in Brighton (I recommend it – looks a good place to take another man’s wife to). Instead of a quick breakfast and a look for an internet café, I took my time over the scrambled eggs and smoked salmon before a leisurely stroll back to Brighton’s splendid Victorian railway station, and an easy trip back to the North East.

The people at – or speaking for – Yahoo tell me Salut! Sunderland readers gave a great response to the Monday lie-in competition.

The what? That’s what you’ll be asking if you missed it first time round when I cynically linked it to a certain game most of us wish to forget (there are loads of those games but you know perfectly well which one I mean) in order to attract as many potential entrants as possible. With the deadline only two days away, here again are the details …

Salut! Sunderland has been chosen to invite fans – whoever they support, so Swansea supporters can get stuck in, too – try their luck in a competition with an unusual prize.