There are lots of reasons why Monsieur Salut has never faced the dilemma of playing for another team against Sunderland.

For starters, an ability to tip long range shots around the post did not establish him as a proper goalie, not least since he was useless at corners.

In any case, Shildon had already produced one league-standard keeper of his generation: John Hope, who career included playing for Sheffield United, letting in a George Best wonder goal and, all of once, turning out for Newcastle.

Outfield? No better. M Salut has two recurring dreams: 1) that he’s started smoking again after 36 years and 2) that he is clean through for Sunderland but suffers a dead leg and cannot even poke the ball home.

So he – I – can only wonder what it must be like to play against SAFC. And my guess – since I want Sunderland to win every game they play, even if it is an irrelevant end-of-season tie AND EVEN if defeat would send Newcastle down – is that I could not. Lee Clark’s t-shirt gesture, leading to his transfer – after an excellent promotion season with us which nevertheless carried no risk of playing his beloved Mags except in a cup game – was deeply unprofessional and stupid, but one to which many people on each side of the Wear-Tyne divide could probably relate, if only for the purposes of pub banter.

Alan Tate was born in Easington and grew up in Murton – “technically not Mackem — I’m a pit village boy, so that is not 100 per cent Sunderland,” he tells the South Wales Evening Post – and supported the Lads as a boy. The family moved away from the area in 1997.

And he needed plenty of tickets for family and friends for tomorrow’s SAFC v Swansea game.

“I think I need to sort out about 25 tickets for the game … my family and friends want to see Swansea doing well and they’ll support us whether I’m playing or not. There will be a few Mackem accents in the away end.”

After joining Man Utd as a trainee and reaching Swansea via Royal Antwerp, his outlook is said to have “changed a little”. Now he is Swansea’s vice-captain, but still looks out for our results.

He does not quite go as far as saying he and his family want a Swansea win but leads us to believe that is the case: “We believe we can go anywhere and get a result, whether the other team play well or not. The lads showed last week that we can even outplay a side like Arsenal, so we’ll go to Sunderland believing we can win.” 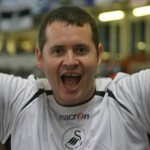 Click to see Jim White’s superb set of answers in the Swansea “Who are You?” feature

Which, of course, is fair enough, even if Alan himself has probably not recovered fully enough from injury to be in contention But I am still not sure I could have done it …

Next Post
Luke’s World: let’s hear it for Zambia, Sunderland and Porterfield