The scoreline bears repeating over and again: Newcastle United 0 Sunderland 3. It was a wonderful team performance and it seems beyond belief that Alan Pardew should place such store by the wrongly disallowed Newcastle goal when Howard Webb had spared his side two, perhaps three first-half penalties, the likelihood of an early Sess goal and a sending off. It also seems beyond belief that in 2013, humanity can still find enough zero-intelligence specimens to beat up a city centre, their own city centre at that though it wouldn’t actually make it seem more civilised had their spite been vented somewhere else, because a football game has been emphatically lost. Pete Sixsmith offers the right mixture of high praise and schoolmasterly scorn …

As a lad of 15, I stood in the Gallowgate End and watched George Mulhall, Neil Martin and John O’Hare score the goals that enabled Sunderland to cruise to a three-goal win.

As a young(ish)man, I stood in the Main Stand Paddock and glowed as Gary Rowell stroked in a hat trick and Wayne Entwistle rounded off our scoring as we beat them 4-1 in a Second Division game that saw us ultimately fail to make a promotion place.

In 1990, approaching middle age, I was behind the goal when Marco slid the ball under Fat Burridge to send us crazy and allow us to see how gracious the Mags are in defeat.

And yesterday, I saw a Sunderland side go out and score three of the best goals I have ever seen in a single match, thereby stuffing them and leaving their chants of “Going down” coming back to haunt them.

Of the four victories I have witnessed on Tyneside, this was the most accomplished and the most welcome. Here we are, regarded as cannon fodder by the Toon Army, a rag bag collection of players under a new manager with dodgy political views, up against the finest collection of French manhood assembled since the Battle of the Marne and an Englishman with a perfect tan, a perfect smile, that has to be from a great dentist like Dentist Vineland.

How could we possibly do anything other than be steamrollered by Sissoko, Cabaye, Chevalier, De Gaulle, Robespierre and the rest? Defeat was inevitable and we would limp back to Wearside and County Durham, the sounds of the Toon taunting tormenting our addled brains.

Except it didn’t work out like that and we stuffed, hammered, bladdered, walloped, cuffed them by 3 goals to nil. All three were absolute gems, worthy of winning any game, but to win a derby on enemy territory – well, that is something special.

So, how was it that a team that had looked to have no confidence, no fight and no idea of where it was going (other than the Championship) was able to do this against a team who were seen by some of their more deluded fans, potential world beaters?

Phone in callers have talked about passion and commitment, but it was an awful lot more than that. You don’t win many games if that is all you have. There has to be a lot of thought that goes into preparing the team. And that was what we had.

What Di Canio and his coaching staff did was to ensure that we defended higher up the pitch. The back line was further forward, which gave the midfield a lot less space to cover and allowed them to pick the ball up and carry it to the forwards.

The midfield four had very clear instructions; each player had a specific role and knew what they were supposed to do. N’Diaye was told to collect the ball and give it to a colleague quickly and then get back into position and do it again.

Larsson, not a natural central midfield player, was allowed to go forward and surge into spaces which were there because the Newcastle midfield five was attempting to push up on our back four, but because it was much higher , there was room for him to operate in. No Newcastle player seemed to realise this.

This is the kind of thinking that a new coach brings to a club, just as Martin O’ Neill did when he introduced McClean into the team. The Irishman did a decent job yesterday and set up the opener for Sess, before he was replaced by Vaughan, who tends not to give the ball away as much. 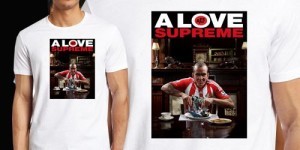 The major difference for me though, was that Di Canio had a much clearer picture of how to use Sess. He played him behind the excellent Danny Graham, and it looked as if he had a free role. Graham’s job was to pull their lumbering central defenders around (he did it brilliantly) and Sess would flit into the gap. It worked. The Benin Magician looked much more comfortable in this role and the goal he scored showed the advantage of allowing him a free rein.

The other two goals were special because they were at our end. The ALS writer stood next to me (sorry, Sobs) was berating Johnson for not shooting or passing, when all of a sudden he let fly and we were 2 up. Thanks to the rapidly retreating Steven Taylor, he was able to set it up and pick his spot. Oh joy it was to be alive at that moment.

Then, the icing on the cake, a third goal and one that stirred memories of 1966. David Vaughan picked the ball up, advanced a few yards (no attempt at a tackle by a now ruined Newcastle midfield) and put it beyond Elliot into the net.

Oh how we laughed as the Toon Army poured down the steps, faces as long as a horse’s and mood as black as night. Off they went into the Toon, to wreak their vengeance on any passing phone box, Gregg’s shop and poor, innocent plate glass window.

There were some contentious issues in the game;

Cisse was not offside when he put the ball into the net, said numerous Mags.

Yes he was. The assistant put his flag up, ergo he was offside.

We should have had a penalty said numerous Sunderland fans.

Yes we should. Various texts made it clear that Danny Graham’s shirt had been tugged. The referee failed to see it. Typical Howard Webb – we expect nothing different from him.

Steven Taylor should have been sent off and then thrown to a pack of starving wolves.

Yes he should. Despite the fair minded M Salut saying that it was a yellow card, he should have been given a red for simply being Steven Taylor. Delighted to see that it was he who was bamboozled by Sess and it was he who kept backing off Johnson for the second. England player my a***.

At the end of the day, we played well, far better than the opposition and far better than we had in the final months of the bitterly disappointing O’Neill period. Players showed that they had bought in to the Di Canio style and that they wanted to succeed. Fans have adopted a siege mentality with regard to the new manager and that can only help by creating unity.

His celebrations were very impressive and I believe the club have opened a special account at a local dry cleaner to try to sort his mud stained trousers out. But he looks a good coach and his substitutions were perfect. Vaughan scored, Colback filled in well and Mangane looked as big as a pine tree.

It was a great day and, coupled with Stoke City’s inevitable defeat against Manchester United, gives us a very, very good chance of retaining our Premier League place. Norwich and Pardew’s rabble are also in trouble. The whole thing is in our hands now.

Beating Newcastle is a doddle compared with us beating Everton. That will be a test for Di Canio. But let’s revel in this and have a great week. My classroom will cease to be Room 8 on Monday and will become Room 30.