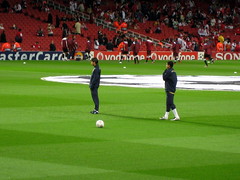 That’s it as far as Salut! Sunderland and Eduardo are concerned. He dived, won his penalty, got pilloried, had a question named after him at this site. But it is time to move on, pray – without great expectation – for a cheating-free World Cup and also remember that Arsenal fans were divided on the incident and what it said about the game …

All responses, even those confusing argument with abuse, will be posted but spam threat makes moderation unavoidable …

Words written, prize awarded. You might have hoped there’d be no more about diving. No such luck.

Salut! Sunderland confidently predicts yet another divefest at the 2010 World Cup. We won’t even be arrogant enough to claim England and our honorary second team Paraguay – an exception to the “no second team” rule for this summer only – will rise at all times above the temptation to cheat, much as we hope they do.

Some dives will be seen as such, and punished. Many will be missed, with penalties and free kicks wrongly awarded as referees are hoodwinked by clever simulation, its well-to-do perpetrators frequently feeling not the least shame in their mastery of just another technique.

In match after match, though, the likelihood is also that uninjured players will roll around in fake agony, after some or no contact, while comrades surround the ref in attempts to get opponents booked, dismissed or carted off to jail.

My abiding memory of the final in Germany 2006 is not of Zidane’s idiocy in butting the oafish Marco Materazzi, but of the Italian goalkeeper Gianluigi Buffon (surely an o missing from the surname) sprinting half the length of the field to dictate the outcome to the referee.

Our Pretend Fair Play competition was based on what we called the Eduardo Question. It was intended more as gag than character assassination, but it is right to draw the line now, first reminding readers of what Arsenal visitors to this site made of the question and its title.

Bear in mind there was no anti-Arsenal sentiment on our part. At their best, which wasn’t often enough because the squad wasn’t strong enough, the Gunners played the sort of football we’d have loved to see win the Premier. And some of the debate followed our declaration of sympathy for Aaron Ramsey after his appalling injury against Stoke City.

What follows is an edited selection of the views of Gooners, as expressed either in direct answers in the Who Are You? series (to the question “would you be happy to take a vital win secured by cheating?”) , or in comments posted here after our coverage of the Ramsey injury.

I’m going to preface my answer by saying that I think football is one of the most beautiful things ever. I absolutely love this game. Anything that makes the game ugly really irritates me. Diving and cheating and unnecessary aggression on the field really angers me because I feel like a player is overcompensating for a lack of skill. I play football myself so I understand that these things happen when you play but there’s a stark difference most times to shoving and pushing and a blatant tackle and dramatic acrobatic antics.
With that said, these things to happen in football and if we’re given a penalty then I’ll gladly take it because of the handful of times we didn’t get it when we deserved it.

I could spend hours discussing this. If that scenario takes place, I would be bitterly disappointed of course because we complain when Rooney dives and we complain when Gerrard dives. But, although the press would do it, I would not stop at that particular episode as you can’t put down to just that a full year of hard work.

Take it all day! Eduardo’s already done it this season so one more won’t hurt!

I think that a big mistake was made with the Eduardo scenario. It happens every week and you can’t punish everyone. We need to accept its just part of the game, and if you get one over on the ref then fair dos. But I am a great believer in the referee’s decision is final. Once the moment’s gone forget it.

Thanks for the Ramsey well wishes, I also acknowledge that Arsenal are no saints and that Gallas should have seen red at Bolton a few weeks prior to the Ramsey incident.

“But it is reasonable to point out that much of the sympathy Eduardo rightly received, after he was on the end of a career-threatening challenge, evaporated when he made his name synonymous with cheating.”
I’ve copied these 2 parts of your post so I can just mention something. I don’t think the world is out to get Arsenal, but in mentioning Eduardo, don’t you think that the media coverage against him was far and way excessive to the actual incident? Players dive / go over easily every week, and I have never seen anything like such an outpouring of coverage over a similar incident.

N’gog was never charged for bringing the game into disrepute, eduardo never got up demanding a penalty where as wayne rooney and steve gerrard can go over, eyeball the ref, demand the penalty, celebrate winning the penalty ,and this is all before they have even hit the deck, eduardo was discriminated against and picked on as the first ever diving cheat charged

Eduardo dives once (with contact) and is branded a cheat, Gerard (4 times at the Emirates the other week) and Rooney dive every week yet this doesn’t get mentioned yet you castigate Eduardo for an exaggerated reaction?

If anyone was to be given the benefit of the doubt should of been eduardo, after all in a split second he must of seen a mad pole rushing out to him and maybe brought back a memory of his injurt and running at speed too , what if the keeper boruc a big lad he is .. went crashing into eddie , both running at speed! im not sayin he didnt look 4 it , who knows … all the slating of eduardo was out of order!

The Eduardo ‘dive’ wasnt in a class of its own. Gerrard pulls off similar ones most weeks, and goes on to try to claim a penalty, something which Eduardo didnt actually do. Rooney does something similar quite regularly too, and likewise throws his hands in the air claiming it was a foul … Eduardo does it once, and once only, with no claiming for a penalty afterwards, and the media go into a feeding frenzy … By having something called ‘the Eduardo question’ you are simply reinforcing this falsehood in peoples minds.

A J F Gooner (an apparently French fan with whom Salut! also had entertaining exchanges in his own language or, in our case, close to it)

… xenophobic england made Eduardo the symbol of diving, but this is only inside england. But the country is so insular, that one can forgive you in constantly making yourselves utterly and ridiculuously blend when you chose to label eduardo a diver while you feel free not to mention that Rooney, Gerrad, Terry and all the shawcross of this world (tackling with no technique and no care) as a disgrace to the game?
THis is really sad. The judges said he’s not a diver but the xenophobic england can’t see the light!
Wake up, the world cup’s coming and you will be on the receiving end.

There, the balance is redressed, Eduardo is pardoned and we’d better think of something else to ask people when the Who Are You? series kicks off again in August. And in our new spirit of reconciliation, we wouldn’t dream of suggesting that Croatia’s exit from the qualifying stages means the number of divers heading for South Africa has fallen by one.

* Picture of Eduardo, warming up with Denilson, courtesy of the Flickr pages of “Wonker”, who regrets that he has no close-ups because “he hardly ever scores, so never comes near me”.

22 thoughts on “Arsenal, cheating and a looming World Cup divefest”

Next Post
Soapbox: come on England – I’m the man for the FA