There is also a good piece in this morning’s Guardian about Plymouth Argyle, who look set to become the first English league club to be liquidated since Maidstone United in the 1992. It looks desperate for them as they need £3m to keep going this season and then £5m to keep them afloat over the summer. Players and staff have not been paid, the groundsman has had to borrow money from his mum in order to pay his mortgage and the usual raft of local businesses are writing off whatever Argyle owe them. 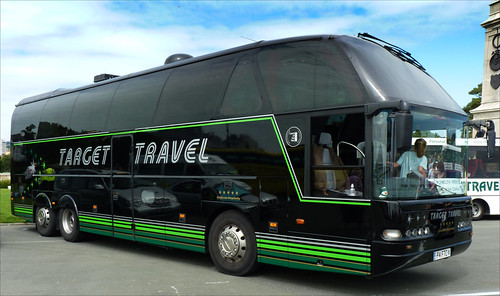 Off the road? The Plymouth team bus, by Graham Richardson

I saw them gain promotion to Division One a few years ago, when they beat Darlington on a Monday night at the much missed Feethams. They had won at Stockport (I think) on the Saturday and hundreds of green and white clad fans had made a long weekend of it as they climbed out of the Football League’s basement division with a resounding 4-1 win.

From there, they scooted through Division One and into the Championship. They were there when we went up under Roy Keane and won 3-2 at the Stadium in Niall Quinn’s penultimate game as manager and looked a half decent team at that level.

So, why am I writing about a club the neck end of 400 miles away from Wearside? Well, that could have been us had Niall Quinn not come in with Drumaville and then Ellis Short.

We have a bit in common with Argyle. Both play or have played in grounds with the distinctive Archibald Leitch lattice work. Both number prominent Labour politicians amongst their fans (Michael Foot for The Pilgrims and Miliband Major for us) and both come from similar sized cities – in fact, the city of Plymouth is bigger than the actual city of Sunderland.

For a club like ours, £8m, while not exactly small change, is a sum that we found quite easily to purchase Stéphane Sessegnon and Marcos Angeleri. Because of the huge amount of TV money in the game, we can spend it on players who may, or may not, take us to a higher level.

Clubs like Argyle must look at the absurd amounts washing around at the top of the English game and wonder why they can’t have some of it. Yes, they may have wasted relatively small sums in the past but they would look at us and see players like Riveros and Angeleri being paid huge amounts of cash for sitting on the bench.

Yes, it could have been us. Quinn put together a package to buy the club in 2006 from an owner who had no idea of what to do next and who was dragging the club down to Championship mediocrity a la Coventry City. When the Irish economy began to falter, in came Ellis Short to pump in, what was by our standards, huge amounts of cash.

Keane left, Sbragia kept us up and then Bruce came in. Not a Mourinho or a Mancini, but a steady pair of hands. A man who knew the Premier League well, who had extensive scouting connections in South America and Europe, who was ambitious and who was keen to succeed on his home patch. Quinn got it right.

He found an Irish/American billionaire to buy into the dream, appointed a sound manager, convinced the owner that we could move into the upper echelons of the League and then persuaded him to keep his wallet open.

And there are people who doubt his commitment to the club!

I am convinced that without Niall Quinn, Sunderland AFC would more than likely be preparing for a visit to Glanford Park rather than Ashburton Grove this weekend. Instead of crossing swords with David Silva, Cesc Fabregas and Louis Suarez in the next month, it would be Gary McSheffry, Nick Barmby and David Norris – or perhaps players from a division lower.

Bruce makes Paraguyan and Argentinian mistakes. Quinn probably regrets using the word “despise”, but I bet that Plymouth Argyle would love to be in our position, rather than facing the prospect of Western League football next season.

Like Sunderland lad Jack Crawford, I nail my colours firmly to the mast.

Argyle FansOnline reports as follows: “Club director George Synan has told BBC Radio Devon that a ‘ substantial’ amount of money has arrived from Japan to aid Argyle. It is believed to be around £350,000, and is being held by club lawyers.”

Next Post
Asamoah Gyan and the Loan Striker State