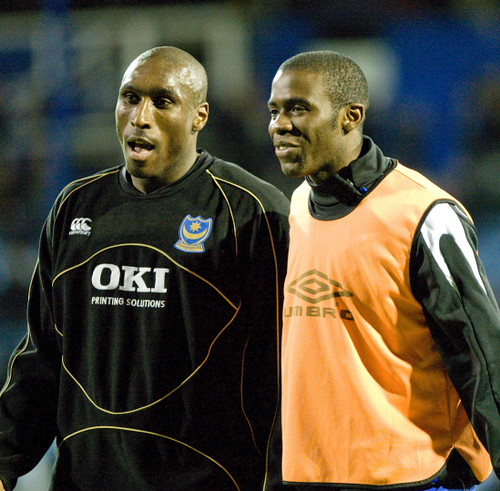 Over the past few days, I have wondered whether to post an article about Steve Bruce’s reflections on his sacking by Sunderland as manager. There has been plenty going on in French football since my return to France 12 days ago – and there is today’s fighting draw at Goodison to maintain our interest in the FA Cup.

But what does any of that matter when set against the awful news from White Hart Lane about the Bolton Wanderers player Fabrice Muamba, who collapsed during the day’s other cup tie, Spurs-Wanderers, and appears as I write to be fighting for his life?

This was tonight’s statement from Bolton and the hospital concerned:

Bolton Wanderers can confirm that Fabrice Muamba has been admitted to The Heart Attack Centre at The London Chest Hospital where he is in a critically ill condition in intensive care.

It brings back sad memories of two occasions:

* the death of Marc-Vivien Foe, who played for a season at Man City on loan from Lyon, after collapsing during an international match when playing for Cameroon. He fell unchallenged during a Confederations Cup semi-final against Colombia, coincidentally in Lyon.

On the first of those memories, let us hope the outcome is happier and that Fabrice, who has overcome a difficult start in life in the Congo to play for and captain the England Under 21s*, makes a strong recovery.

On the second, while accepting that crowd control reasons seemed pressing at Heysel, let us congratulate Howard Webb, Bolton and Spurs for their dignified and decent decision to call a halt to today’s game.

I am pleased that this small addition to the find of goodwill towards Fabrice Muamba has been preceded by good wishes from Salut! Sunderland readers:

Let’s spare a thought for Fabrice Muamba who reportedly is fighting for his life after collapsing just before half-time in the Spurs-Bolton game. It appears to be a heart problem. He’s only 23, poor guy. We must hope for better news of him.

A lovely man by all accounts and a fine player. let us hope for the best.

… sentiments which Salut! Sunderland endorses with every positive thought it can muster.

* The Football Association chairman, David Bernstein, said: “On behalf of The FA, I would like to send our thoughts and prayers to Fabrice Muamba and his family this evening. Fabrice has played 33 times for England Under-21s, captaining Stuart Pearce’s side during this time, and is a player, and more importantly a person, we care greatly for. We are in contact with Bolton Wanderers over Fabrice’s condition and are awaiting updates.”
The Guardian adds:

Muamba, who was born in Kinshasa, in the Democratic Republic of Congo, was granted asylum status in Britain in 1994 at the age of 11, rejoining his father who had been forced to flee his homeland on political grounds. He went on to represent England at junior level, up to the under-21s. He began his career at Arsenal’s academy, where he was a popular member of the club’s youth setup. He moved to Birmingham before signing for Bolton in 2008.

Next Post
Everton or Sunderland for the FA Cup semis? Your shout, your chance of glory