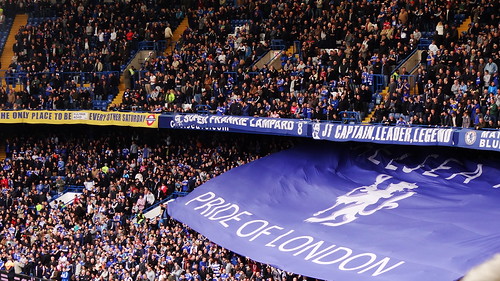 ”Same old Barca … always cheating” was the refrain heard repeatedly around Stamford Bridge as one Barcelona player after another fell in a crumpled pile of human anguish after the flimsiest of Chelsea challenges. It reminded me of all the times Sunderland supporters have sung ”12 men, you’ve only got 12 men” though, on this occasion, the German referee Felix Brych seemed to me to get most decisions right.

That, Herr Brych, is quite some tribute to any big match official in an age when players, doubtless under instruction, make it desperately hard to sort fact from fiction in the split seconds available.

But in any case, weren’t the fans doing the chanting last night supporters of one of the English clubs most closely associated with systematic cheating, with highly developed skills in all forms of play acting? Many of the neutrals responding to the Salut! Sunderland ”Who are You?”question about diving, feigning injury and the rest of it certainly seem to think so.

And wasn’t the biggest culprit last night, in any case, Didier Drogba? The best that can be said about his constant falling over is that he may have been trying to take pressure of his team, pretty much under a Catalonian cosh throughout, rather – most of the time – than pretending he had been subjected to GBH by an opponent.

Drogba, in fact, more than once gave the impression of being in such discomfort that I might have worried, had I not known better, that he needed serious medical treatment. What a relief, then, to see him so alert and incisive with the finish that gave Chelsea their slim first-leg lead.

That was also a Sunderland moment. For once Chelsea were, as we have often been, the underdogs, battling gamely away against opponents possessing, or assumed to possess, vastly superior technique and better players in every position.

And just as we have done in matches in recent seasons against Manchester City, Arsenal, Manchester City and Liverpool, Chelsea ignored the script, soaked up the pressure, rode their luck and scored a splendid goal on the break. I excluded Chelsea from that list of Sunderland adversaries because in the match people still talk about, the 3-0 win last season, Sunderland and not the Blues were the vastly superior side.

The goal had me thinking back to sweeping moves of the past that ended in Sunderland hitting the back of the net. Remember that barnstorming move and Kevin Ball header, in what may well have been a relegation season many years ago and was against Chelsea, in another 3-0 victory? Or Ji against Citeh, offside as he may have been; John Mullin against Man Utd, definitely a relegation year; Kevin Phillips, racing upfield to score at the Kop end?

It was especially fitting last night that the wonderful Lionel Messi should have made the error that sent Chelsea steaming away to score in the last seconds of the first half.

Messi dispossessed easily by Lampard, glorious ball out to Ramires, great chest control and cross to the waiting Drogba, arm raised as if in no doubt he was about to score provided someone accomplished the formality of giving him the ball. Scuffed his shot? Maybe, but it was still good enough to creep in by the post.

The second half, much as the first, was one-way traffic with Barca always looking capable of scoring but defied by some dogged, even heroic defending. I loved Ashley Cole’s measured, take-your-time goal line clearance in the first half while Cech’s second-half saves were inspired.

We’re meant to despise Chelsea as representing all the moneyed arrogance and disrespect that pollutes our game. I plead guilty to harbouring such sentiments from time to time. Last night, however, and not for Little Englander reasons (a scintillating Messi hat trick would have pleased me equally as a spectacle), I liked them a lot. And I especially liked, as a Sunderland fan used to this kind of thing, the way they looked human and vulnerable but fought like tigers for a result. Molta sort al Camp Nou
…

6 thoughts on “Chelsea and Barca: just like watching Sunderland”