Skip to content
Yesterday a disappointing SAFC side lost 2-0 at home to an energetic, workmanlike Crook Town who showed flair when needed and took their chances well, making light of a disorganised defence. To cap it all their keeper saved a potentially game changing penalty which would have made it 1-1. Peter Sixsmith was there watching the Railwaymen of Shildon make a less than impressive start to the season and the discussion around the ground amongst those who follow the other SAFC focused on what kind of season was in store for the revamped Sunderland team. Hoping no doubt that the Fulham defence might be as kind to our new American striker as were the Bosnians (see clip in footnote*)…

Pete gives us his take on what lies ahead at the Stadium of Light.

WHAT DOES THE FUTURE HOLD?

The new season looms. In my years as a Sunderland fan, I have looked forward to most of them. There were some that you knew were going to be hard, some that surprised you and some that shocked you but there has rarely been one like this where we have absolutely no idea of what is going to happen.

It could be a cracker, with our exciting pressing game bringing us a number of big scalps and giving us a cup run all the way to Wembley. There are players like Giaccherini and Altidore, keen to do well and test themselves in the Premier League. On the other hand, it could be a disaster as the players we have signed from the Turkish, Swiss and Portuguese leagues find the intensity of the Premier League too much for them and we spend all season languishing at the bottom.

Twelve months ago, I approached the campaign with optimism. Martin O’Neill had identified his main targets in Fletcher and Johnson and was biding his time for them. We went to Arsenal and came away with a reasonable draw (no doubt thanks to biased refereeing) and as the two names arrived, we looked forward to a good season. That it had all gone pear shaped by the time West Brom beat us 4-2 was evident to many. O’Neill struggled from then on and despite a couple of mini surges, we looked a team bereft of imagination and ideas by March. In came Di Canio and his first three games appeared to change the mind-set. However two points out of the last twelve showed that the players were barely good enough and that the manager needed to mould his own team rather than rely upon the players he had inherited.

So, here we are in August and there is a whole new group of players ready to wear the red and white shirts graced by the likes of Charlies Thomson and Hurley, Len Shackleton, Gary Rowell and Kevin Phillips.

There may be some who reach those heights and in 50 years time grandfathers will be dangling their grandchildren on their knees, waxing lyrical about Emmanuelle Giaccherini or Cabral. They will tell tales of how the fearless Paolo Di Canio completed the double over Newcastle United, took Sunderland to an FA Cup Final and despatched Chelsea with Jozy Altidore and Steven Fletcher bagging a brace each. Of how we first glimpsed the wondrous talents of Duncan Watmore and El-Hadji Ba before they moved on to Barcelona and Bayern Munich for a king’s ransom. We can but hope. 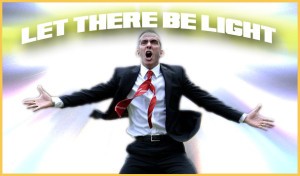 To listen to the pundits there will be none of that. They are suggesting that Di Canio is a man of straw, that he will fall out with the owner, the players and the kit man before storming back to Italy leaving us looking more like the 2008 model of Derby County than Real Madrid.

They say that the players brought in are unknown to them and that the likes of Cabral, Diakite and Roberge are lightweights, fit only to make up Serie A squads or play in inferior competitions. They may be right and it could well be a disaster. It may end up with Ellis Short throwing in the towel, cutting his losses and scooting up north to Skibo Castle as we drop into the Championship by March. After all, these guys know so much about the game that they clearly prefer to pontificate rather than actually manage a team.

What I hope to see this season is some exciting, attacking football where we actually take the game to the opposition rather than relying on absorbing pressure and catching them on the break.

We have experienced three seasons where the football has been less than exciting and what we need is a footballing philosophy which says: “You are fans. You pay a lot of money to come here. We want to entertain you and win football matches in a bright and lively manner.”

We have no indication of what we can do, so when the team lines up against Fulham, there will be a mixture of old and new. The old must shake off the aura of gloom that seems to hang over the Stadium of Light and which has done for far too long. Our home form has been poor and has done little to persuade fans to cough up for season tickets or individual ones. The new players must eliminate that feeling of negativity we have experienced far too much in the last few years.

Every season brings a crop of new faces. Some settle quickly and make important contributions, others flit in and out of the team and some are unmitigated disasters. We are sure to have an O’Shea, a Vaughan and an Angeleri amongst the ones that Di Canio has brought in. But I hope that it is the O’Shea type, intelligent, committed, a footballer’s footballer that prevails. If we have a crop of Vaughans and Angeleris, I shall be spending more time on the terraces at Dean Street, Shildon than in my seat at the Stadium of Light

8 thoughts on “They say we’ve got a revolution: Sixer previews the new season”

Next Post
The north-south divide. Long may it continue (and God Bless dear ol’ Arsenal)