In his post match e-mail Gus Poyet praises his team for getting more right than they got wrong. We all know it is a work in progress but he seems happy enough, seeing some improvement in the application of his philosophy whilst not ignoring the weaknesses he saw against the Saints. At least that’s what he tells M Salut… 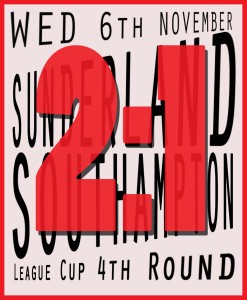 The idea was to get two things right tonight – one, the result, and two, to play with confidence. We played a lot better than we have been and we passed the ball a lot more.

I understand that the fans want to see us move with the ball as quick as possible, but playing that way is too easy to defend against. There is always someone in a position to make a mistake when you play that way. You don’t need to be so direct to score a goal; you can allow a player an extra pass to create that chance.

I do believe we looked better tonight; it may be difficult to compare as it was a cup competition.

In the first half maybe we passed the ball a bit better than we did in the second. The way that we made them run behind the ball opened up more chances for us. It is a process, we need to be consistent and do the right things for 90 minutes – not just 10. I’m pleased with the way the players passed the ball.

It is something to build on – especially looking ahead to Sunday’s game with Man City – if you give the ball away against a team like them you’re going to suffer. Set pieces are very important; we always say that and we worked it well tonight and managed to score.

From there Southampton had to commit a lot more, and in doing that gave us the space to go on and get a second and kill the game off. However, for some reason we cannot seem to keep a clean sheet and they pulled a goal back, but we held out and got the win.