David Hale* is @AVFCRant at Twitter. I liked the name so invited him over to Salut! Sunderland. He thinks we’ll stay up with a bit to spare so can come more often; not too often, though, given his matchday forecast. Wes Brown is cleared to play and Neil Swarbrick, so admired by Wayne Rooney and David Moyes, is the ref …

Salut! Sunderland: Amazing win at Arsenal at the start of the season but no so good since. What do you make of Villa’s start to the season and how do you rationalise what happened after the Emirates?

The Arsenal win was great and it was nice to pick up from where we left off last season. It was even more pleasing after we went behind so quickly with another own goal. To be honest to be 12 games in and have 15 points in 12th position with a goal difference of -1 after already playing Arsenal, Chelsea, Liverpool, Spurs and Man City is better than I think some Villa fans feared when the fixture list was released.

Looking back, was Martin O’Neill a hero or villain at Villa?

He was a hero while he was here. I think we all got taken in by the man’s charm and Randy Lerner was romanced to the point of spending a hell of a lot of money and paying some big salaries that we still have not really got over. He became a villain the way he departed and left us so close to the start of the season.

Villa fans are quick to point the finger now but you can’t deny the feel good factor at Villa Park at the time with attendances and results, flirting with the top four and finishing 6th three years on the trot a long way from where we currently reside.

What impression did you form on his time at Sunderland and how will he fare with Keano in charge of the Republic of Ireland?

He has a great reputation for making average players great and to believe, or run through brick walls for him. He’s supposed to be a great man manager but very controlling; to be honest I think that he was removed from his duties at the right time because on the run he was on relegation was a real possibility and obviously the financial rewards for this season means it would of been a disaster for Sunderland.

Were you sad or relieved in the end to see Darren Bent go? What has Christian Benteke been like since that opening day triumph?

I think we owe a lot to Darren Bent and make no mistake about it the season he arrived his goals were crucial to Aston Villa I personally will always be grateful for his contribution and I thought the way he handled himself during the difficult time being in the “bomb squad” was admirable. I have no ill feeling towards Bent. He just doesn’t fit Lambert’s profile and the culture he wants. Make no mistake about it, with the right service Darren Bent is a top top goal scorer in my eyes.

Benteke is currently in a bit of a dip to be fair. It’s his second season and he is no longer a unknown quantity so he will find it harder as he is given more attention. He has been in and out with injuries and niggles and does not look at his best. I also thing sometimes his first touch is woeful which sees me get criticism from fellow Villa fans. He’s not the complete player yet but again he has been really important to us and seeing him fit and up for it is a awesome sight.

Well Paul Lambert definitely has a project that he is looking to build at Villa, young hungry players who will grow as a team and hopefully improve year on year. We still have a huge amount of growth to be where Villa fans believe we should be. For me as long as there is progress and I can see that the team is improving …

The progress is slower than Villa fans would like but it was not viable with the wages we had players on. Randy Lerner has been burned and although fans feel he is a little shy he has invested a huge amount into our club and the days of that are over.

I think we have to trust Lambert and as long as there is progress on and off the pitch I think the partnership will last. Apparently they talk nearly every day.

Were you at the 6-1 mauling last season? Could you believe your eyes?

I was and you know what it was a combination of us clicking – we had shown glimpses especially away at Liverpool and it was a crucial time for us we had threatened it previously – add the fact that for whatever reason Sunderland didn’t turn up. It was a great night and long overdue, probably my favourite home game last season. It happens and we were on the wrong end of one of those when we went to Chelsea so I know how Sunderland fans felt, midweek miles away from home. I took this photo on the night … 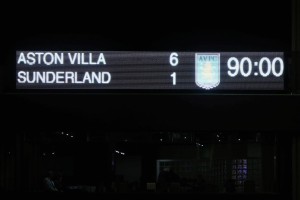 Which other Villa-Sunderland games of the past, home or away, stand out in the memory for good, bad or amusing reasons?

I think over the years they haven’t been high scoring affairs and they don’t honestly stand out in my memory. The away 3-1 win in 2009 in the cup was the only Sunderland vs Villa game I have seen away from Villa Park.

Any thoughts on Sunderland – the club, the fans, the city and region, PDC and Poyet?

I think Sunderland have a great history and a very vocal loyal fan base which demand a team that give it all. There shave been some ups and downs looking from the outside. I always enjoy watching the Sunderland-Newcastle derbies.

As for PDC I’m not a fan. I went to Swindon last season in the cup when we won and he was saying that we were going to get relegated which he later denied but it looked very clear on the night. I also did not like the way he publicly criticised his players and reacted to the fans. He is a entertaining character but you hear rumours about him banning players from smiling in the gym and banning tomato ketchup etc and when he threatened to cut short the players’ holiday. He liked to rule with fear but I think lacked the credibility as a top flight manager and after the initial buzz of him arriving and giving you the natural lift that every new manager does he was found out. No disrespect to your club but a lot of people enjoyed watching him fail. I like Poyet. He’s honest and says it like it is without hanging his team out to dry. It’s clear the players like him. I wish him well.

What have been your own highs and lows as a supporter?

Highs for me were going to Wembley and seeing us win the Coca Cola cup 1996. I know I’m fitting into the stereotype of a Villa fan dining out on past successes but I’m too young for the European cup win as I was two.
My personal low point was losing to Bradford last season in the semi final of the league cup at home. It was set up for a great night and our first leg away game cost us. It hurt as I don’t think we will get a better chance to win a cup in the next few years.

This picture I took sums up that night … 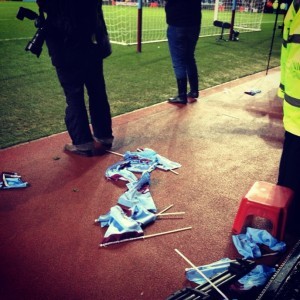 Who are the greatest Villa players you have seen, or wish you’d seen, and who should have been allowed nowhere near the claret and blue?

Quite predictable. I think for me it has to be god Paul McGrath. He put in 252 appearances even with his dodgy knees and is a cult hero who always gets a great reception when he is back at Villa Park. When you read about the tough time he had at Utd and with AF and his personal, much-publicised demons … they offered him a £100,000 retirement package and a testimonial which he refused and then went on to play the best football of his career at AVFC. Ian taylor for me is also a cult hero, lifelong Villa fan who gave his all and had a gift of scoring some crucial goals for us. Add to that he’s a big part of our club still and always stops to talk to fans. Great guy.
As far as should of never gone near the claret and blue, Stephen Ireland – he never wanted to come and has never shown half the player that he was at Man City. He’s the master at earning big contracts and failing to deliver. Watch him go at Stoke now!

Where, hand on heart, will our respective teams end up this season?

I think we will better last season and finish 10th or 11th. As for Sunderland, I think 13th-14th.

What will be the top four and bottom three in order and who is for the major cups?

Brazil 2014: excited already or too obsessed with Villa to care too much?

England have almost made me numb from the expectation levels of previous tournaments. I love the World Cup and I think we will go as far as the knockout phase. We are just a million miles from winning it.

Which aspect of the modern game most inspires you and which appals?

I love the evolution of the modern game and especially the pace of the Premier League. It is blistering at times and really entertaining. You watch Spanish or Italian football and yes it’s technical but it can be slow. I also love the fact that over the last few years any team are capable of winning on any given day. The diving culture frustrates me.

I will be at the game and I’m sorry but I think it will be a 3-1 win to us – Weiman, Benteke and Lowton, and Larsson for you.

* David Hale on himself: I’m 33 and a lifelong Villa fan and current season ticket holder in the North Stand (I love the away fan banter) who only this season has started the Twitter account @AVFCRant. The idea is to share all the latest Villa news and views as well as sound off and rant when required. I’m currently building my blog and will launch my site in the new year. I already have a couple of celebrity Villa fan interviews lined up which will be a great way to launch the site.

1 thought on “The Aston Villa ‘Who are You?’: on MoN, Darren Bent, SAFC survival”